After Hewlett-Packard announced their new Mediasmart Servers last week, Acer has announced at CES that it is also building a Windows Home Server system - The Acer Aspire EasyStore Home Server - which is powered by energy-efficient Intel Atom 230 CPU and up to 4 SATA hard drives. 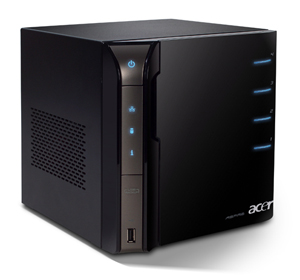 Acer has now joined the list along with other two companies - Shuttle Computers and VIA Technologies to announce Windows Home Server systems. The Acer Aspire Easy Store Home Server is expected to hit the retail stores in March.

VIA has also announced two models:

Both Shuttle and VIA Home Server systems are available right now in the US, Europe and Asia.