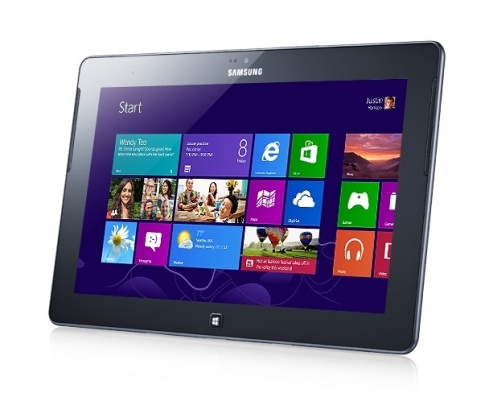 Windows RT has opened up a new world of possibilities for Microsoft as well as consumers. Since the tablets are not restricted to either AMD or Intel CPUs, the product supply chain for these tablets will be more competitive and should offer lower priced consumer tablets. While Microsoft has given us a few nuggets of information in the past about the platform, one of the bigger outstanding question was how would the desktop mode work on WOA tablets.

At IFA, a number of Windows RT tablets have been announced and the folks at The Verge were able to get their hands on one of the Samsung models. While we expected that Office and Internet Explorer would be available on Windows RT, it looks like the desktop is more feature complete than expected. File Explore, Paint and Notepad are all available, which is a fantastic sign that Windows RT will have a proper file browser unlike iOS and that other core Microsoft apps will be available too.

When you look at the other announcements for Windows RT, you can begin to see this will not be a second-tier platform for Microsoft. Nvidia has announced that Unreal Engine 3 has been ported to Windows RT which will give the platform yet another boost in terms of gaming that should help drive the tablet sales.

That takeaway here is that Windows RT is going to be much closer in terms of functionality to proper Windows 8 than we expected. This is certainly encouraging that the platform will be quite robust out of the box which should make the tablets even more attractive. While price points still are a bit of a mystery, if Microsoft delivers the Surface RT at $199 with the same functionality as shown in the Samsung tablet with Windows RT, it won't be just a home-run, it will be a grand-slam.