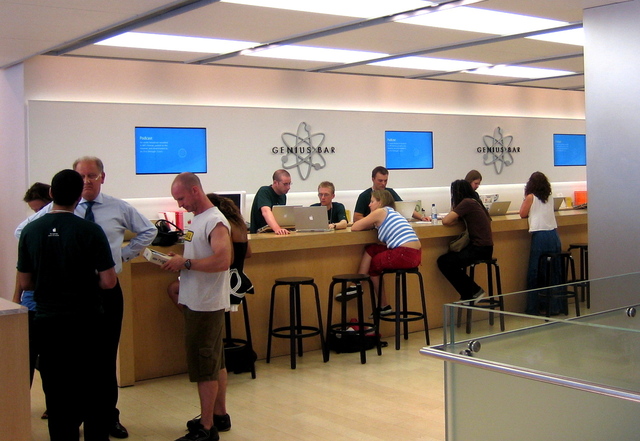 A Genius Bar on Regent Street, filled with Mac users looking to get problems solved.

Despite being one of the largest tech companies, it is surprising how little we know about the internal workings of Apple. Thanks to the leak of a 'Genius' manual, there is a rare glimpse at the reality behind the company.

The 'Genius Training Student Workbook', acquired in its latest form by Gizmodo, teaches all the basics for interacting with customers, keeping them happy and ensuring a sale. A recurring theme is the usage of the word 'empathy' throughout the manual.

Not sympathy, no, but empathy, which takes on a different meaning.

A number of scenarios are outlined in the manual, with Apple Genius employees being encouraged to use a system of what they feel, what they felt, and what they found. One of the scenarios is below:

Customer: This Mac is just too expensive.
Genius: I can see how you'd feel this way. I felt the price was a little high, but I found it's a real value because of all the built-in software and capabilities.

The three sensations come in the form of empathising with the customer's feeling, somewhat siding with it, and then adding in the realisation that the price can easily be justified.

It's a very clever system, and the end goal is simply to get the customer to bring their cash to the checkout and walk out carrying a Mac or an iPhone or whatever product they'd like to find. 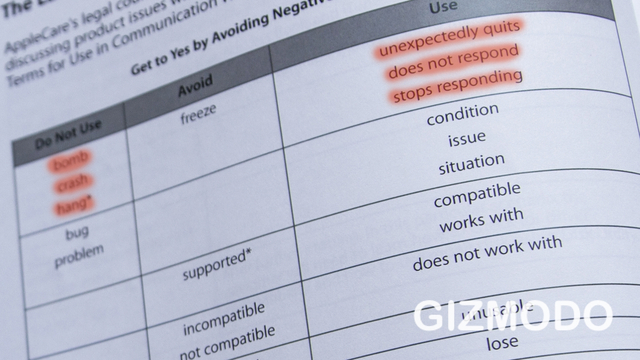 Certain words are also banned, with the belief they could upset a customer about their device. 'Bombs', 'crash' and 'hang' are three terms for when a device 'freezes' (also inadvisable to use), but you're better off not even touching these terms.

Instead, Genius employees are advised to use the more neutral sounding 'unexpectedly quits', 'stops responding' or 'does not respond'.

Thanks to Harry Gordon Selfridge, 'the customer is always right'. Anyone who works in retail will tell you that's completely wrong. As an Apple Genius you're not meant to tell them that, but instead go in a roundabout way and correct them. One of the scenarios relates to this:

Customer: The OS isn't supported
Genius: You'd think not, wouldn't you. Turns out it is supported in this version.

The manual also puts forth the four maxims of customer interaction and employment as an Apple Genius, quoted directly below:

"We guide every interaction."
"We deepen and restore relationships."
"We help them discover."
"We enrich their lives."

Interestingly, the manual also guides interaction between Genius employees, with a strangely stilted version of regular communication dubbed 'Fearless Feedback'. This is the feedback coming from your co-workers, and is open everyday as a form of... well, feedback.

"Hi, fellow Genius. I overheard your conversation with your customer during the last interaction and I have some feedback if you have a moment. Is this a good time?"
"Yes, this is a good time."
"You did a great job resolving the customer's iPhone issue. I was concerned with how quickly you spoke to the customer. It seemed like you were rushing through the interaction, and the customer had additional questions."

The manual then justifies this form of speech, saying it's essential for "Apple Retail Culture" and - somehow - your 'personal development'.

The system works, whether we like it or not. Apple knows how to get products flying off the shelves, and when you consider how long the Genius system has been around for, you know it has to work.

Recently, your expectations of an Apple Genius might have changed due to the rather awkward new advertising campaign they've adopted, before they were pulled by Apple.

The system works, whether we like it or not. It is worth remembering that not all Apple Geniuses are going to follow this guide to the letter, because it does appear to be your typical human resources-led development to foster 'synergy', or whatever business buzzword is doing the rounds this week.