When Microsoft announced that the next version of its Windows Server product would be titled Windows Home Server 2012, the company didn't state at the time how many versions of the OS it would provide. Today, Microsoft finally provided that information, revealing four different versions of the operating system. 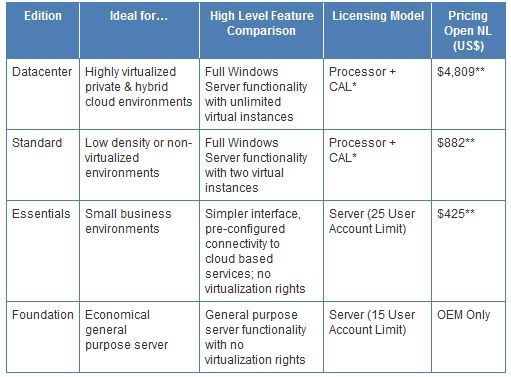 The official Windows Server 2012 page shows all four versions along with a brief description of each feature. The pricing ranges from $425 for Essentials up to $4.809 for the Datacenter SKU. One of the versions, Foundation, has no price listed, with Microsoft saying it is just for OEM businesses.

ZDNet.com reports that having four SKUs of Windows Server 2012 is a sharp drop compared to the 12 SKUs that businesses could purchase for Windows Server 2008 R2. More details have been revealed in a PDF file from Microsoft.