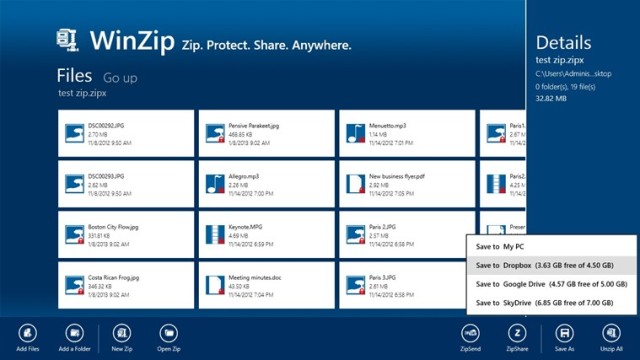 In November, the makers of the popular PC file compression program WinZip launched its promised Windows 8 app. The only downside to the launch was that the app cost a relatively pricey $7.99, although a free trial version was made available as well.

This week, that price plan for the WinZip app was abandoned, at least for now. The Windows Store now shows that the full version of the WinZip Windows 8 app can now be downloaded for free; it's currently unknown if this is a permanent change or if this is just a temporary promotional deal.

The WinZip app has also received some updates since it launched three months ago. The change notes include that the app can now add files and folders from the cloud-based services Dropbox, Google Drive and Microsoft's own SkyDrive to a zip or zipx file. You can also open, save and unzip those kinds of files saved on those services with the app.

The app has also added a way to share zip files on Twitter and LinkedIn and the app also lets users manage all of their zip file accounts from just one location. Finally, the UI of the app itself has been changed a bit.

Update: Well, as it turns out, the WinZip app is not available for free after all. We have heard from a company spokesperson that the app is free for 15 days but they have now put in a $7.99 a year subscription fee for the app. The spokesperson told us:

By default, subscription apps under this model appear as free in the store. We want to make sure the pricing is clear to customers, so we’re working as quickly as possible to have the store text updated.