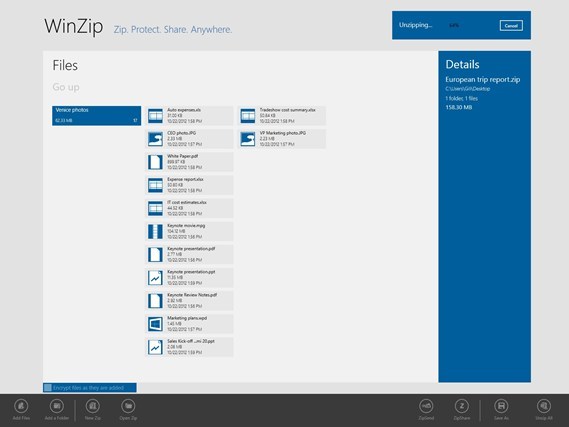 Many months ago, we first reported that the popular PC file compression program WinZip would have a "Metro" specific version made for Windows 8. Since then, the developers of WinZip have released new versions that will work with the desktop UI of Windows 8.

Today, WinZip finally released their promised app made for the "Modern" Windows 8 user interface. It's now available for download in the Windows Store for the price of $7.99, although there is a free trial version available to grab as well.

The new Windows 8 app allows for the creation of both .zip and .zipx files. The site states:

Use it to get oversized files or entire folders out to friends, contacts and followers through email and Facebook thanks to direct connection to ZipSend and ZipShare file sharing services. Whether sent by email, shared online or stored on your system, WinZip helps keep files safe and makes them easier to transfer.

This is just the latest high profile PC program or app that has made it to the Windows Store, earlier today, the Nook app from Barnes and Noble made its first appearance for Windows 8 users.

Thanks to Zawl Ali for the tip!