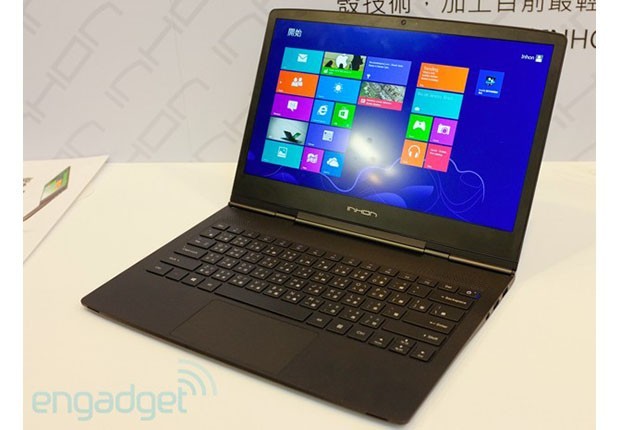 How thin would you like your laptop? If you like having a super-thin and super-light notebook, then Inhon might have something right up your alley... if you live in Taiwan. The company has announced the Blade 13 Carbon, which it says is the world's thinnest and lightest notebook.

Engadget reports that the Blade 13 Carbon is just 1.9 pounds and is 10.7mm in thickness. As the name of the notebook suggests, the laptop uses carbon fiber for its case, along with a magnesium alloy for its keyboard. The Windows 8 notebook doesn't come with a touchscreen but it is 13 inches in size with support for up to 1080p resolution. It also comes with either an Intel Core i5 or i7 processor, a 128 or 256 GB SSD, and 4 GB of RAM.

The price for the Inhon Blade 13 Carbon starts at $1,350, which is actually not bad considering you are getting a full notebook that's close to the weight of some tablets. While the notebook is due for release in June in Taiwan, there's no word when, or even if, it will be sold in other markets. The company is also releasing a 2.6 pound version of the notebook, using fiberglass, that costs about $1,000.