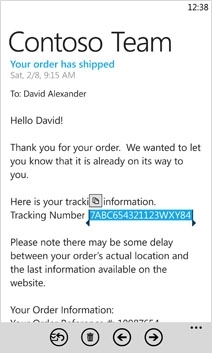 Microsoft is about to release a new update for Windows Phone 7 called 'Nodo' which Neowin believes will ship in early March. But information is now surfacing claiming that the update may already be live on new Windows Phone 7 devices.

WpCentral is reporting that a new Dell Venue Pro that was purchased in India already has the update applied. The source states:

"My friend just picked up a new Dell Venue Pro in India. And it has the NoDo (copy-paste) update already applied! The moment I saw the copy icon appearing on his phone, I yelled and started trying it out! Works exactly as advertised and in the emulator."

With the update expected in the very near future, it shouldn't come as a surprise that new hardware already has the update. If Microsoft is mandating that all new devices come with the update, it should help prevent fragmentation that Android currently experiences.

The 'NoDo' update will bring, among other things, copy and paste functionality to the platform, overall speed improvements, and other tweaks to help improve the end user experience. Microsoft is pushing the WP7 platform with nearly everything it has with a $500 million advertising campaign. Add to that the recent deal with Nokia, and Microsoft is playing to win.