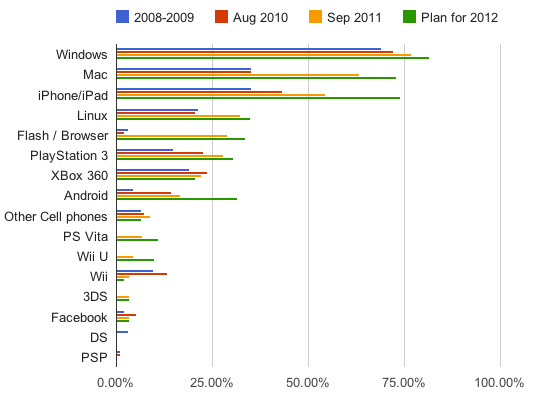 Microsoft launched Xbox Live Arcade, its downloadable console game platform, for its Xbox 360 console in 2005. Since then Xbox Live Arcade has released a number of innovative and acclaimed games from smaller game developers such as Braid, Limbo and Super Meat Boy. However, is Xbox Live Arcade losing its appeal to those same indie developers? In a new and extensive editorial, Ron Carmel, one half of the game development team 2D Boy, tries to show that game creators are moving away from Xbox Live Arcade to other platforms.

Carmel, who helped to develop 2D Boy's acclaimed puzzle game World of Goo, says that while Microsoft's Xbox Live Arcade publishing plans worked when the platform launched, " ... things have changed quite a bit in the last few years and it might be a good time to reexamine some of the assumptions and reasoning behind how XBLA is managed." He sent out a survey to a number of independent game developers asking which platforms they intended to release their games on in 2011 and in 2012. The results (shown above) indicate that the Windows/PC platform was the preferred one for those surveyed by a large margin.

In addition, Carmel asked those same indie game developers how easy or hard it was to develop games for a variety of platforms. Valve's Steam was called the easiest to develop for by 64 percent of those surveyed. By contrast, 48 percent of developers surveyed called making games for Xbox Live Arcade "excruciating" with none of them calling it easy. Carmel says that if this trend continues, "I believe the diversity of games available on XBLA will diminish, quality will suffer, and revenue numbers will drop as players start to move away from an unremarkable portfolio of games."

Carmel does offer a number of ideas on how Microsoft can improve Xbox Live Arcade and make it easier to attract quality games from indie developers. Some of these ideas include allowing games to be self-published without the need for a third party publisher or a Microsoft publishing deal, making it easier for consumers to find Xbox Live Arcade games, and improve the contract to distribute games on the platform. Carmel says, "Microsoft proved that indie games can be million sellers on consoles, and then sat on its laurels for half a decade as more nimble and innovative companies like Valve and Apple took the lead. I would love to see Microsoft rise to the challenge of adapting to new digital distribution landscapes. More healthy platforms means more interesting, creative games that push the limits of our medium."