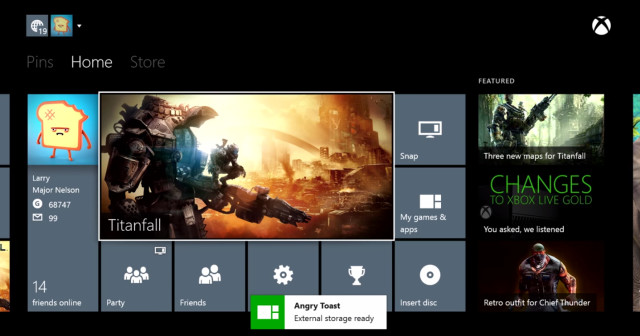 Microsoft is rolling out a huge update for the Xbox One that will allow external hard drives, add the capability to share your real name with people on your friends list, improvements to SmartGlass, and liberate popular apps such as Netflix, Hulu, and 180 more apps to non-Gold subscribers.

The requirements for the external hard drives are fairly standard and will require a USB 3.0 compatible drive with 256GB or more of free storage space. Once connected the Xbox One will instantly recognize the new drive and ask to format it. At this point it will become the default storage device for all the content you download. You will also have the option of transferring all your stored data from the Xbox One to the external hard drive. This will allow you to easily take your information on the go and plug it up to a friends console and access your media and games from their system. There will be a limit of two drives that can be connected and used at the same time.

The June update will also give gamers a new option called Real Names. This option will allow users to share their real name to friends instead of their Gamertag. You will be allowed to select who you want to share your real name with. If choose not to, you will remain anonymous with your name displayed as a Gamertag.

SmartGlass has also been improved and updated. The SmartGlass app will add a new activity feed that will be displayed directly on your home screen. This will give you access to see what your friends are doing and even give you broadcast notifications. If you click on the broadcast notifications you will be able to watch these streams on your SmartGlass device. Lastly, SmartGlass will gain access to OneGuide and add a universal remote that will allow you to control your other connected components.

The new updates will begin rolling out sometime this week for the Xbox One and Xbox 360.