Xiaomi had a very good 2016 in India, which has now become the company's biggest market outside China, and 2017 doesn't seem to be any different. The company has continued its value for money formula and has been releasing appealing smartphones almost regularly. Back in November, the Chinese company announced three new devices in its inexpensive Redmi series, these included the Redmi 4A, Redmi 4 Standard and Redmi 4 Prime. There are differences between each of these devices based on hardware features and internal specifications, due to which the prices vary from about $90 to $150.

The cheapest out of these, the Redmi 4A went on sale in India last month through Amazon India and Xiaomi's online store. I managed to get one for myself in the first flash sale and used the device for just about a month. The Redmi 4A is priced at Rs. 5999 which is roughly equivalent to $92 and can be considered a steal, as it does seem to tick the right boxes on paper. Read on to find out whether it is indeed a good deal in real world use and overall quality, or a disappointment like the Oukitel U15S.

The Redmi 4A comes in a classic Xiaomi plain white box, and this time around there is no image on it either. The whole packaging fits in well with the company's minimalist approach towards design. On the inside, there aren't a lot of bundled goodies. You get the phone, a travel charger, a SIM card removal tool, and standard regulatory paperwork. 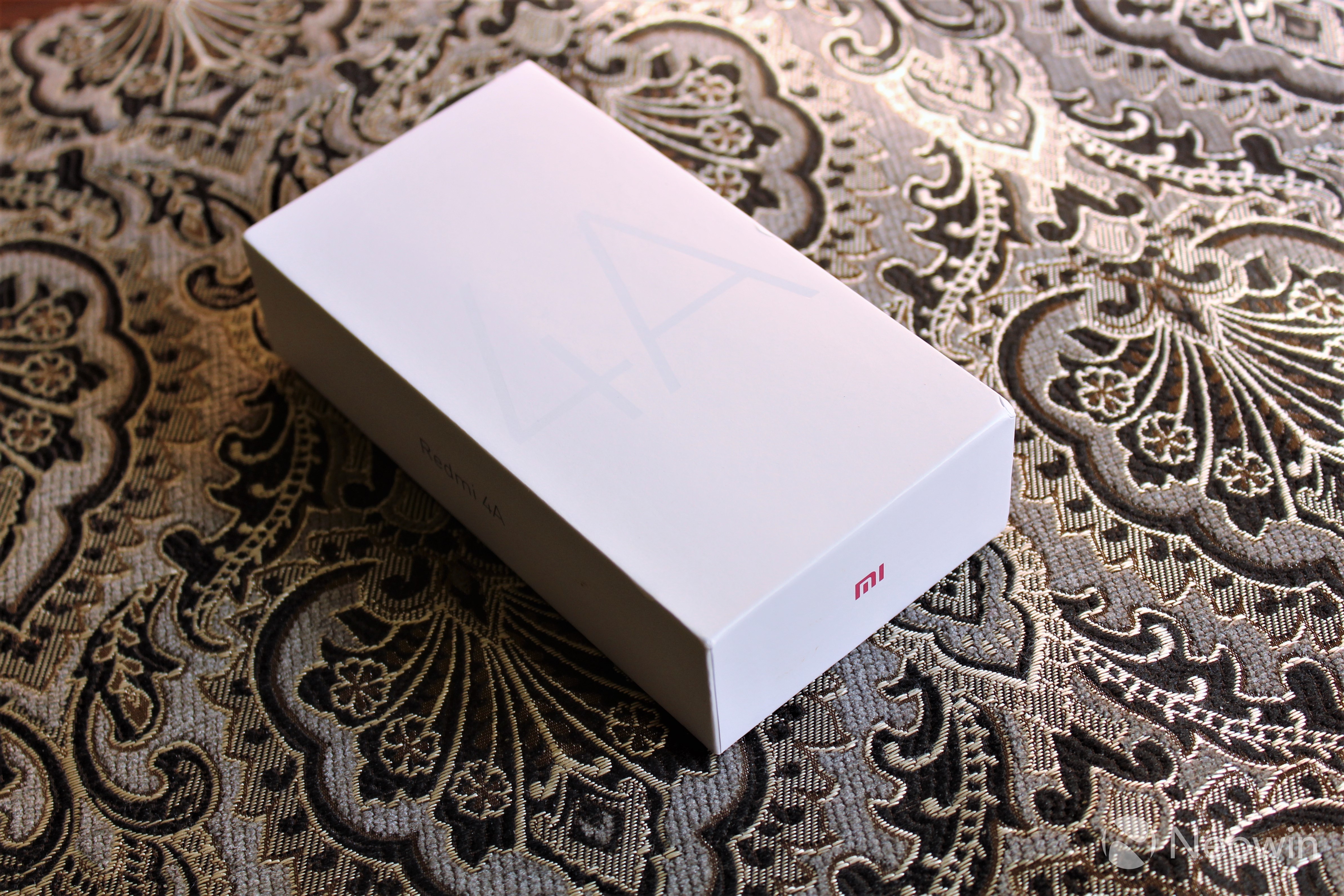 There are no earphones, screen protectors, or covers bundled with the device. I would highly recommend purchasing a screen protector for the Redmi 4A, as the quality of the scratch resistant glass doesn't seem up to the mark.

The Redmi 4A looks a lot like other Xiaomi phones such as the Redmi 3S, Mi Max, or the Redmi Pro, with a few changes here and there. The biggest difference between those devices and this one is its polycarbonate exterior. 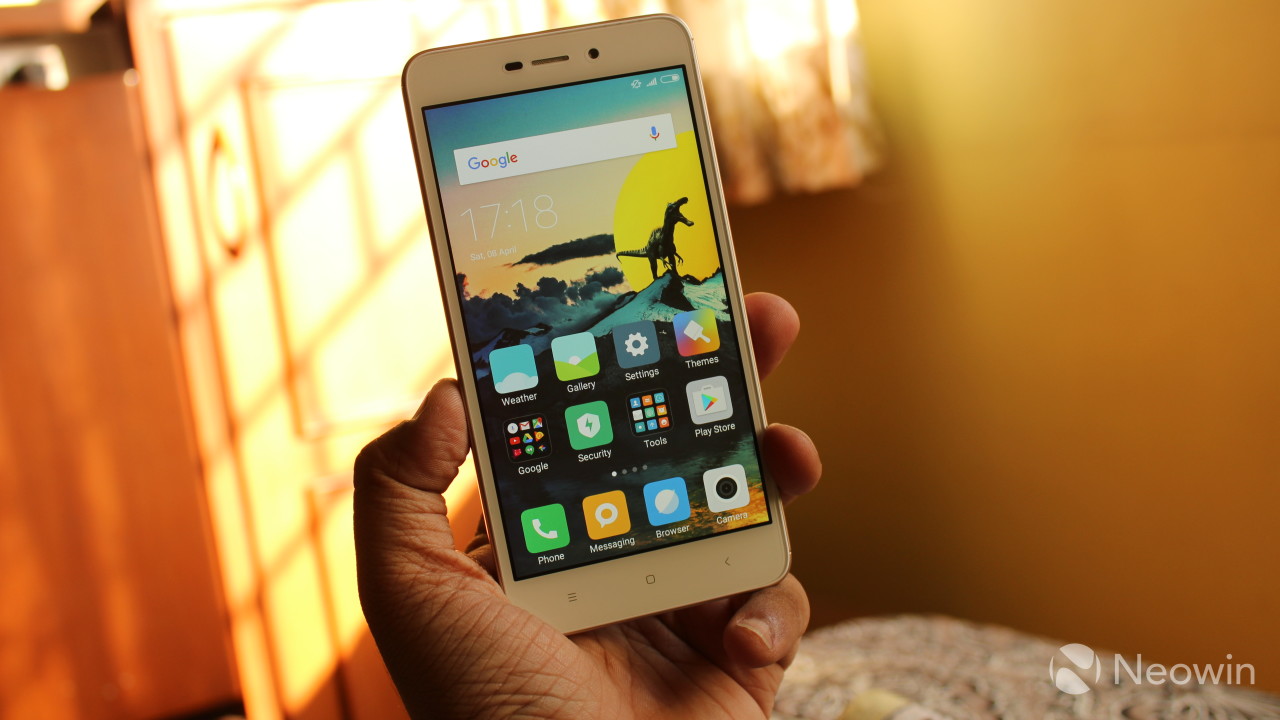 Xiaomi has ditched metal for its cheapest smartphone, but hasn't sacrificed on the build quality as such. The smartphone feels good in the hand and it is very light for a device packing a 3,120 mAh battery. 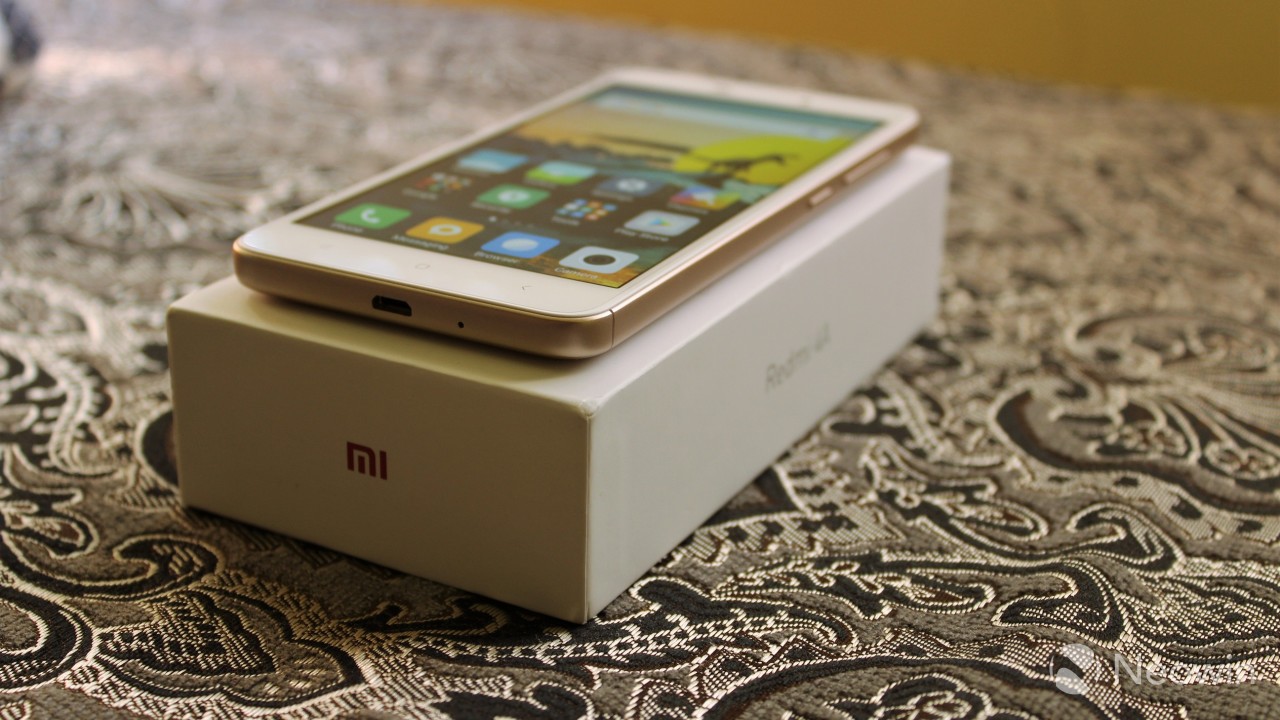 The attention to detail on this low-priced phone is quite extraordinary and Xiaomi has done a terrific job in making the device look a bit premium. The positions of the buttons and ports are a pretty standard affair, with the volume rocker and power button on the right edge, the SIM card slot on the left, the micro-USB port at the bottom, and the 3.5mm headphone jack at the top. 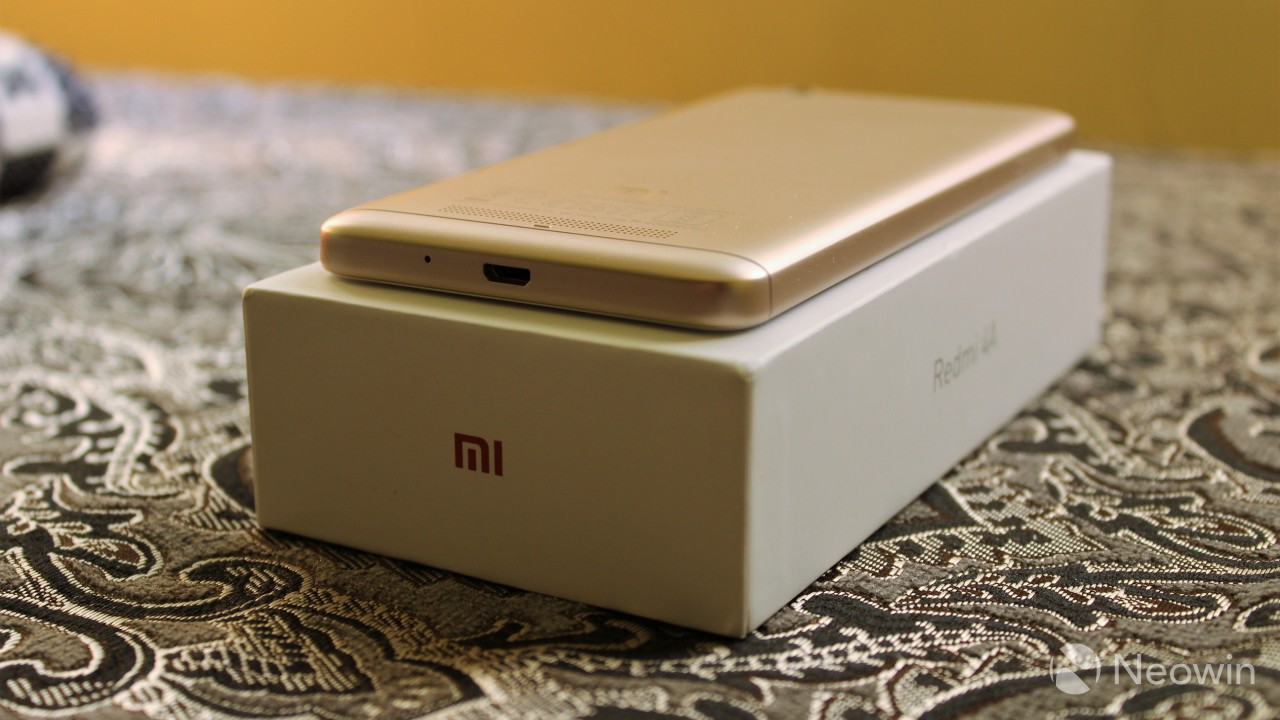 Just like other recent Xiaomi phones, the Redmi 4A too comes with an IR blaster positioned at the top. On the back, the 13-megapixel camera is positioned towards the left corner at the top, and the speaker grille is towards the bottom. The front is fully covered with glass and features capacitive buttons at the bottom, an LED indicator just below them, the 5-megapixel front camera on the right of the earpiece at the top, and ambient light and proximity sensors on its left side. 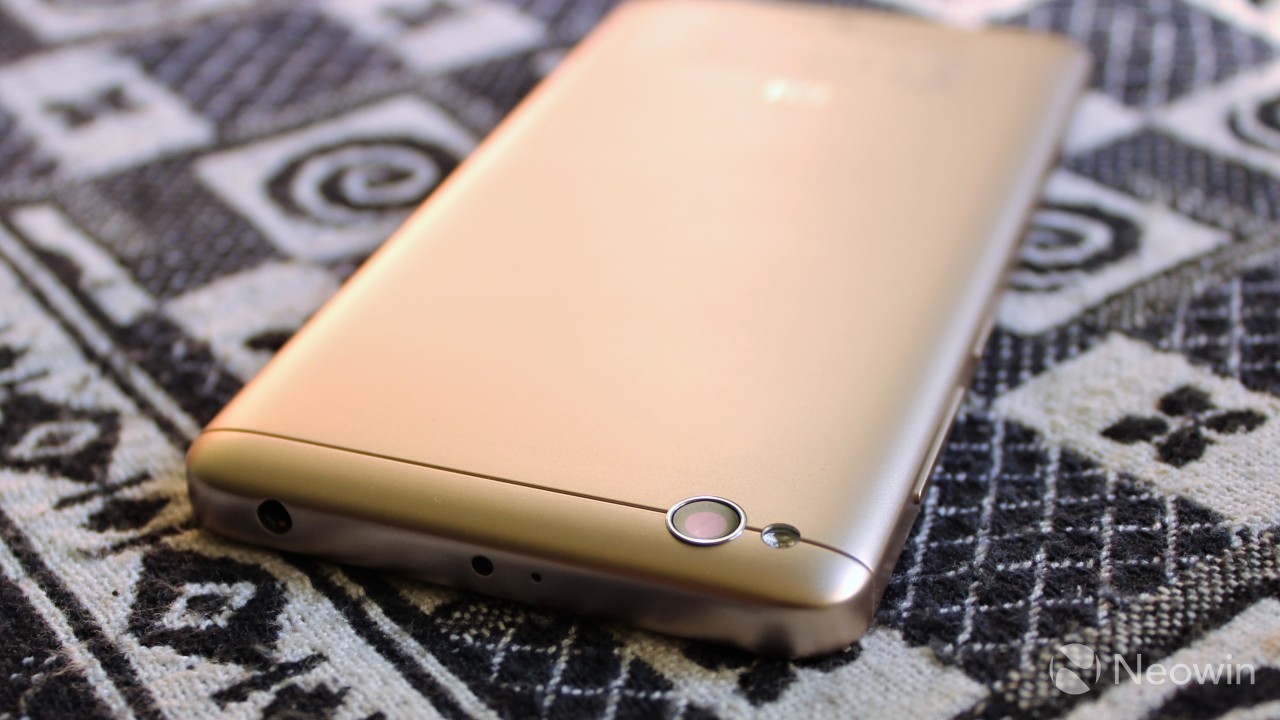 Overall, the design is nice and the device is comfortable to use one handed most of the time, which is a plus point in case of 5-inch smartphones that don't have tiny bezels like the recently launched Samsung Galaxy S8 or the LG G6.

Xiaomi hasn't changed the display specifications from the Redmi 3 series in the Redmi 4A. Like its predecessor, it also features a 5-inch IPS LCD with HD (1280x720) resolution, which translates to 296 pixels per inch density. The display quality is quite good, the color reproduction is well balanced and it brightens up well in situations where there's too much light. 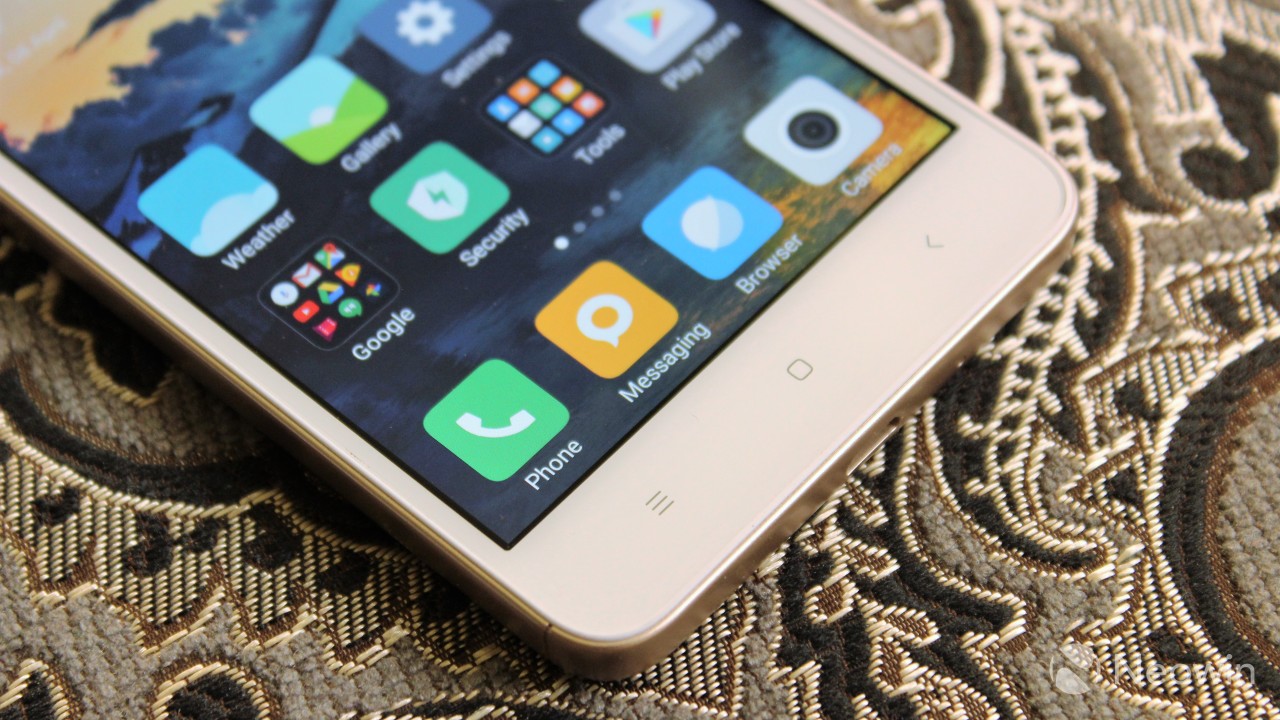 I found the colors perfectly fine in all conditions, and there was no oversaturation for any particular one. The viewing angles too were decent, and there weren't any visible issues with the display during my time with the device.

Due to its low price, it would have been difficult to use a higher resolution screen or an AMOLED panel in the Redmi 4A, but what Xiaomi is offering is apt for its price and something that is common with competing smartphones such as the Moto G4 Play or the Moto E3.

The Redmi 4A seems to have good antennas as it managed to pick up a decent amount of signal, even in areas where my other devices struggled a bit. Call quality was decent enough, and I didn't come across any crackling or static noise during any calls. On the receiver's end too, the sound was clear enough and there were no call drops or other issues either. Overall I can say it handles calls well.

When it comes to network connectivity though, buyers should check the supported 3G and 4G bands. I could not use the device with Vodafone India's 4G in my city. 3G speeds were similar to what I get on other devices.

There's not much to complain about the audio output of the loudspeaker and the headphone jack. It was of acceptable quality with a decent amount of bass and loudness, which was a pleasant surprise as the Redmi 3S' sound was a bit of a letdown. The speaker placement can be a problem since it can get covered when the phone is held at the bottom, but there's nothing major that can disappoint the user.

Xiaomi has retained the same camera combination as the Redmi 3 series in the Redmi 4A, which included a 13-megapixel rear camera and a 5-megapixel front camera. This time around, the quality of the rear camera seems to be much improved, which could be due to a different sensor used in the 4A.

In daylight, the images captured were good with sufficient sharpness and natural looking colors. In low light, the images seem to undergo some sort of processing for a better output, but the results were soft and slightly out of focus.

The camera software is very quick, there is barely any delay in capturing images, which is something rarely seen on inexpensive devices. Redmi 4A is capable of capturing HD video (1080p) at 30 frames per second and the output is once again pretty good in daylight but suffers in low light. As visible in the camera sample, the low light video has focusing issues and stability is lost.

Xiaomi seems to have put a lot of thought into the camera, and I was, for the most part, pleased with what the Redmi 4A has to offer in this department. You can check out the camera samples below:

Redmi 4A comes with MIUI 8.2.6, which sits on top of the older Android 6.0.1 Marshmallow with February security updates. It is a bit disappointing to see Xiaomi shipping Marshmallow, while Nougat was already available before the device's launch. However, due to the heavy skinning in MIUI, it won't have made a ton of a difference either, so it basically comes down to whether one is fine with Xiaomi's custom skin. 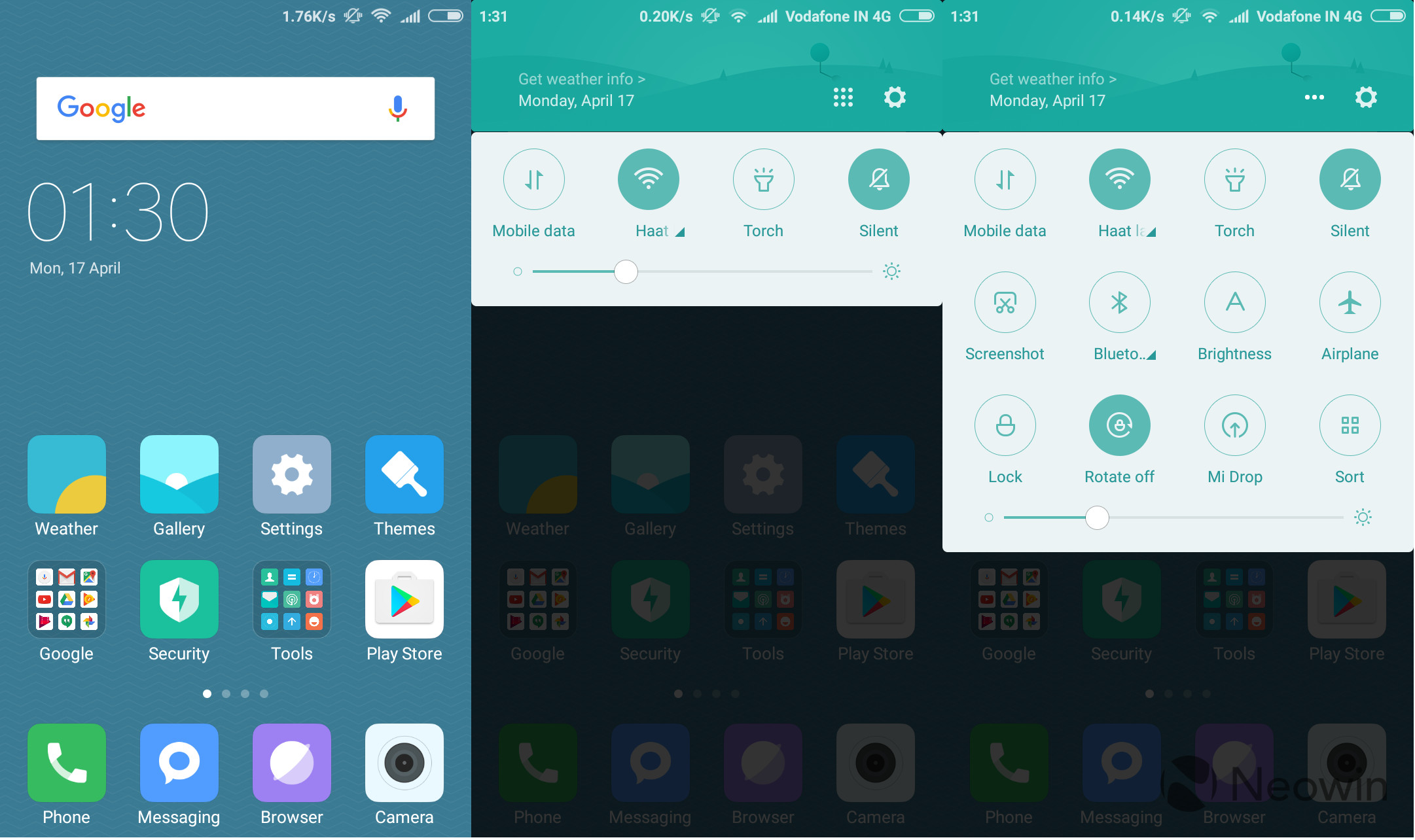 I like MIUI customizations in most cases, but I began using a custom launcher after about a week with the device, as I like a clean homescreen with few icons. The MIUI apps are always good and have plenty of extra features compared to stock Android apps in general. UI consistency is once again top notch, a huge point that OEMs ignore when designing their own shells over Android. I received one major update weighing about 1.4 GB in the first week of usage itself, which is said to have improved stability of certain apps.

There is a bit of bloat preloaded on the Redmi 4A, but it seemed less compared to that on the Redmi 3S Prime. Even the Google apps included with the device are just the basic ones such as Maps, YouTube, Drive, Hangouts, Photos, Play Music and Movies, and Gboard. The Flipkart and Amazon India apps were also preloaded, which may be some sort of an advertising deal between the manufacturer and the two retailers.

I wouldn't say that I prefer MIUI, but I have no issues in using it with another launcher. Some users may not think so, thusgiving this smartphone a pass.

The Redmi 4A packs a Qualcomm Snapdragon 425 processor, which is coupled with an Adreno 308 graphics processing unit. The chipset itself sits at the bottom of the mid-range offered by Qualcomm, but is quite power efficient and churns out decent day-to-day performance at the same time. Since the smartphone comes with 2GB of RAM, most applications run quite well, even when used simultaneously.

Apps such as WhatsApp, Snapchat, Facebook, Twitter, and Instagram show no signs of struggle on the device and are always responsive. Occasional UI lag is visible while browsing heavy webpages in Chrome, and the browser does slow down if it is kept running in the background for a long time. Casual games don't stutter or crash, but load times are a bit longer than higher priced phones. 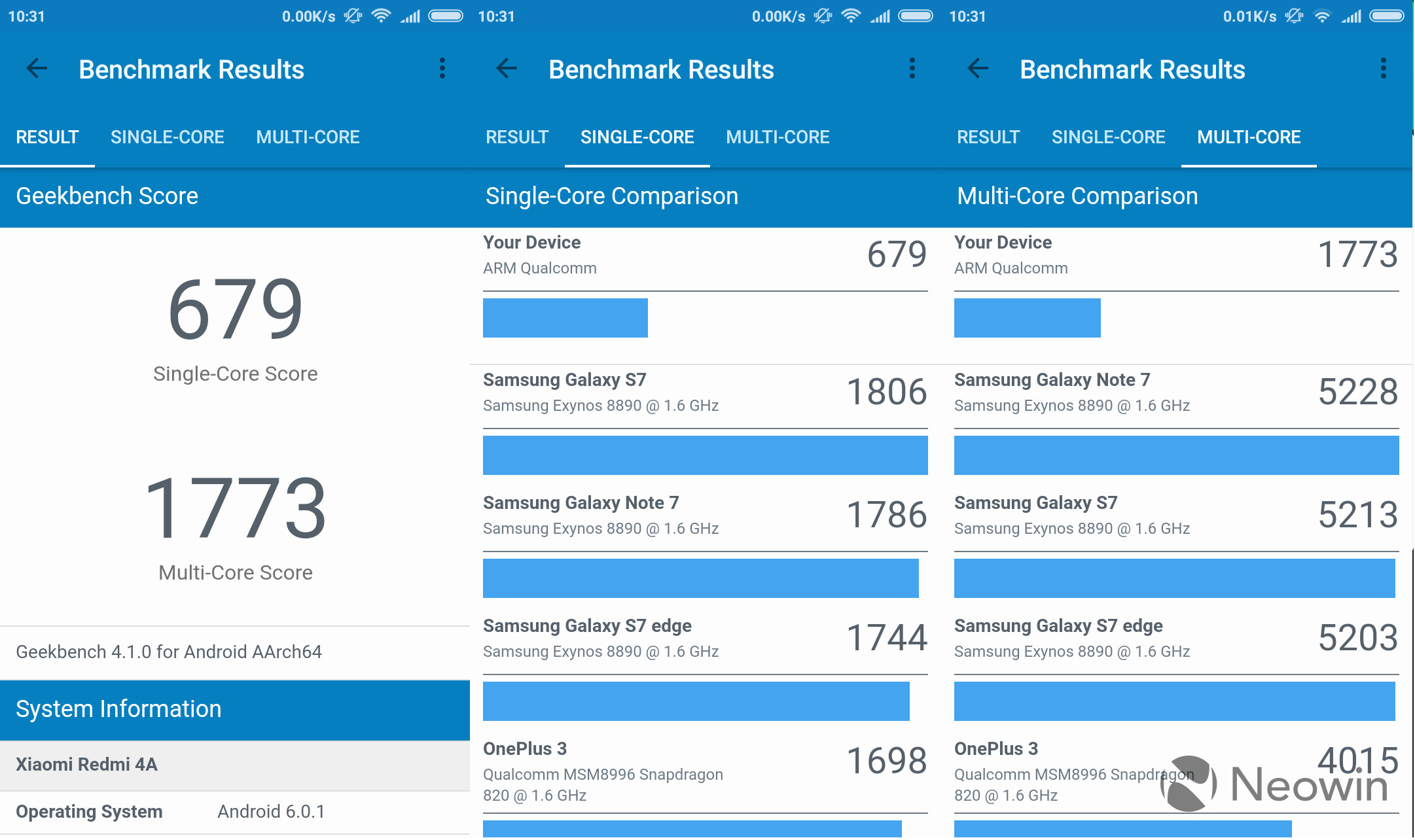 When playing games, the device gets a little warm near the rear camera, but nothing that can be termed as a serious problem. Benchmarks don't paint a particularly pretty picture for the smartphone, as it is easily beaten by flagships from the past, and even a few mid-range devices. That shouldn't make a bad case for the smartphone though, as it has very good real world performance. 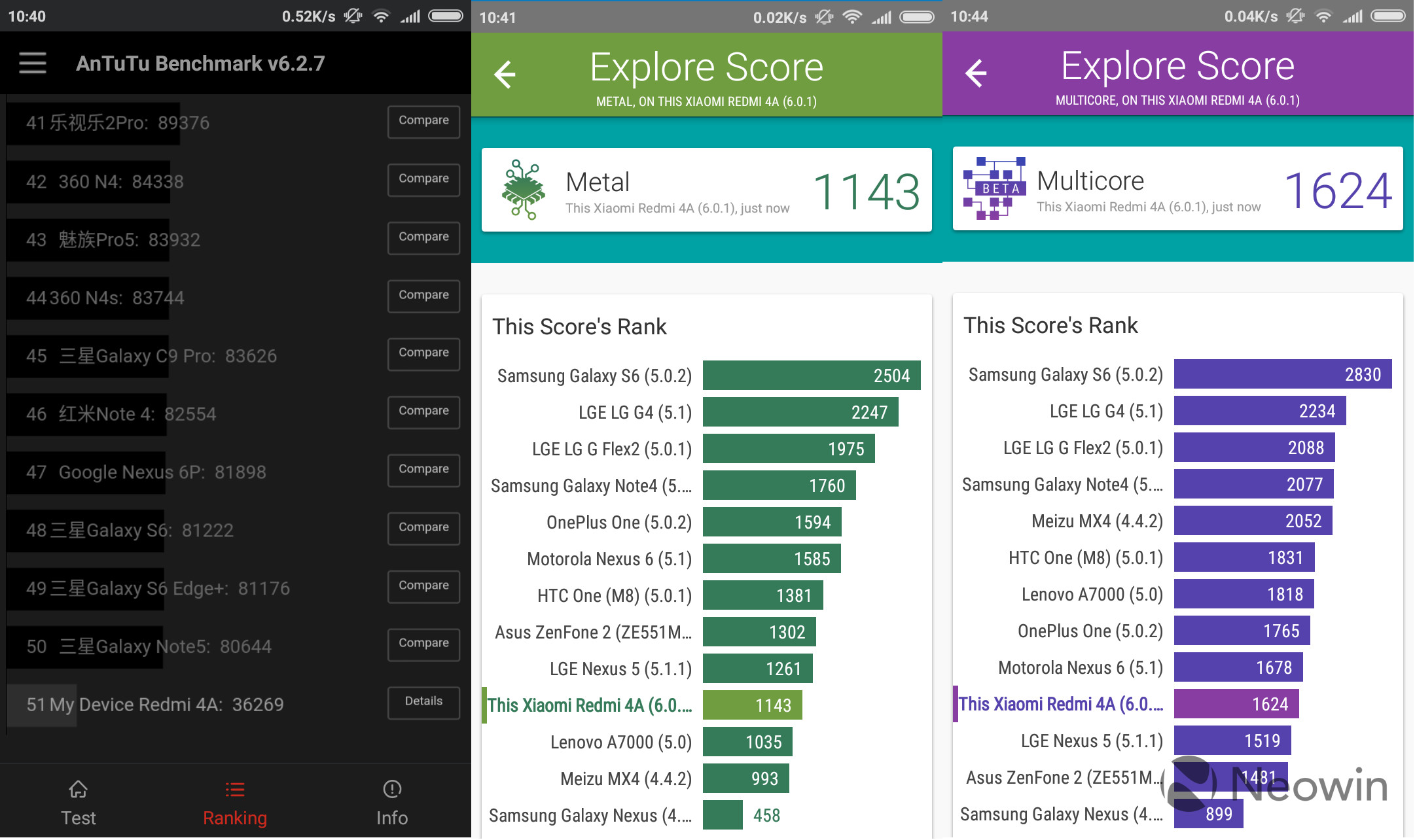 One of the biggest gripes I had with the Redmi 3S Prime was its GPS issue, that has not been resolved yet. Luckily, the Redmi 4A has no such problem and the GPS receiver works smoothly on it.

The Redmi 4A features a 3,120 mAh battery, which keeps the phone ticking for a significant amount of time. With an hour of phone calls, half an hour of surfing, and intermittent texting through WhatsApp, Hike, or Facebook Messenger, the phone lasts an average of 14 hours. This includes about 4.5 hours of screen on time, which is a good stat for a battery this size.

There were a few occasions when I had to switch on the power saver mode to push the device through the day. Fully charging the smartphone takes nearly 2 hours with the bundled charger. Although the Snapdragon 425 chipset is said to feature Quick Charge 2.0, the Redmi 4A does not support it, and comes with a standard 1A charger.

Nevertheless, the battery life is impressive, and MIUI optimizations likely help it last longer. Out of the popular brands in this price range, only the Moto E3 Power has a higher capacity battery at 3,500 mAh.

Xiaomi has got a winner here with the Redmi 4A. There is no room for complaints, and its highly compelling price tag makes it hard to ignore this smartphone in the entry-level price segment. The only thing that may affect someone's decision of getting this device would be MIUI, but that alone doesn't seem like a proper reason to ignore an otherwise amazing smartphone.

Some of the smartphones which compete with the Redmi 4A in the same segment include the Moto G4 Play, Moto E3, and the Moto E3 Power. Going spec-by-spec with its competitors, the Redmi 4A seems to be the better option as of now, but pricing and availability outside of India and China remains questionable.