A quick glance on Amazon and eBay reveals that consumers are spoilt for choice when it comes to portable power. Capacities reach in excess of 20,000mAh, enough to charge the latest smartphones and tablets multiple times over at budgets to cater to nearly everyone.

Today i will be reviewing the 12,000mAh power bank from Xtorm kindly sent to me for review by Mobilefun. Boasting 12,000mAh capacity and QuickCharge 2.0 as well as USB-C charging at 5V/3A, it's just right for USB Power Delivery (USB-PD) to fast charge the latest Type-C smartphones such as the Nexus 5X and 6P. 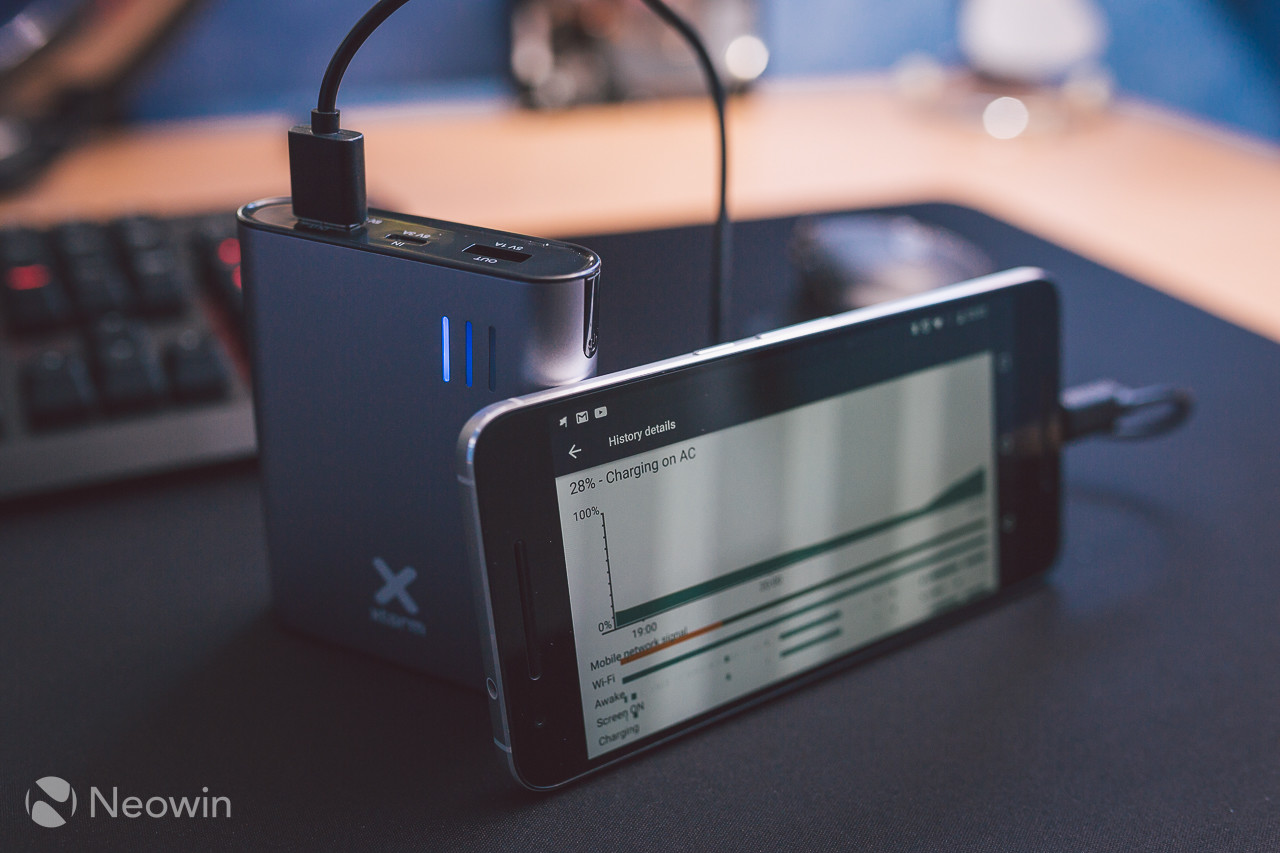 My initial thought when I looked up the model was that it was it was rather expensive. At the time of writing it sells for £55 ($77). Competing products sell for much less, and now QuickCharge 3.0 versions from the likes of RAVpower are nearly £20 ($28) cheaper.

Having said that, the price can be justified by a quality product, from the materials used for construction to the performance and reliability.

I have been long-term testing the Xtorm power bank since December 2015 and so far have not experienced any degradation in how fast it charges my phone and other devices. 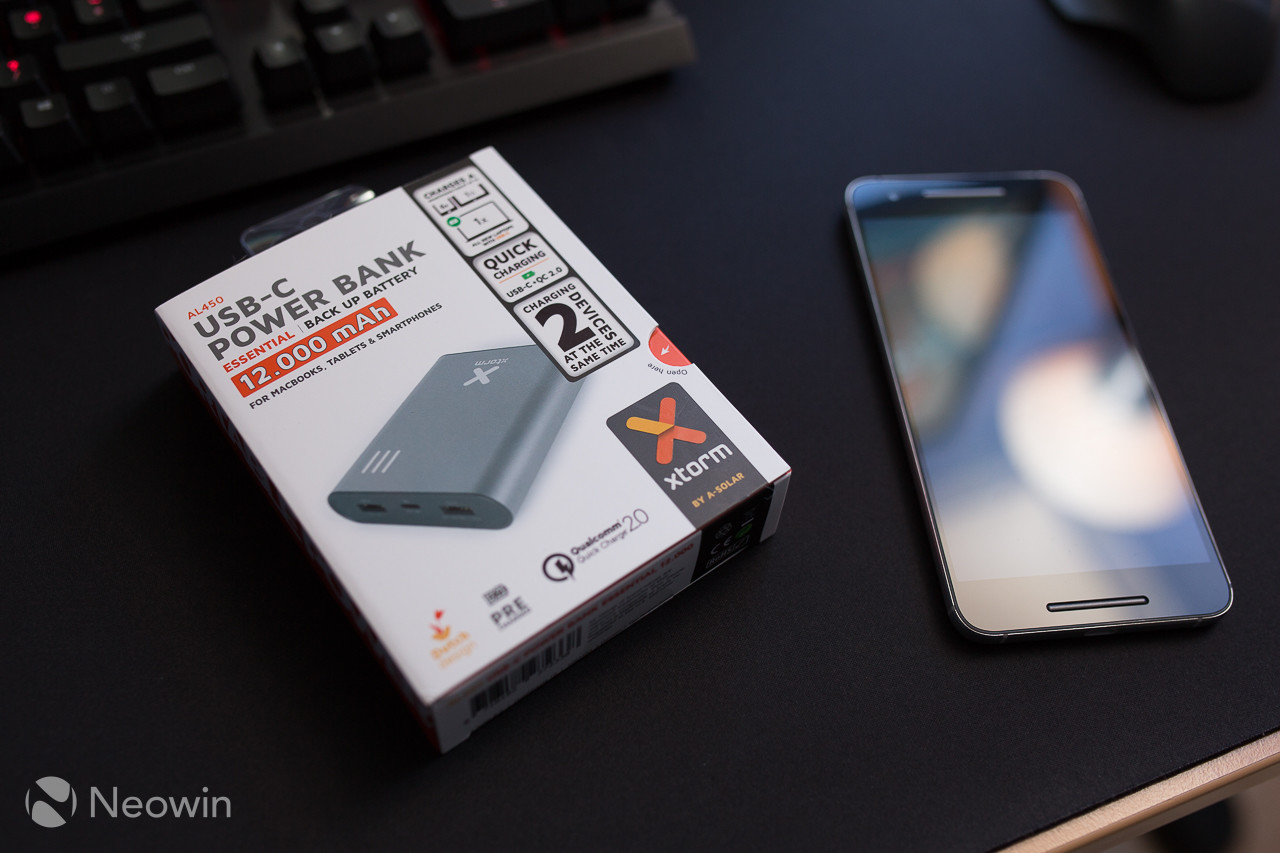 The packaging contains all the necessary information you'd need to know about the power bank off the shelf. I like this as some products only give you a snippet from the spec list or you need to Google the model number to get the information you need. Not here. 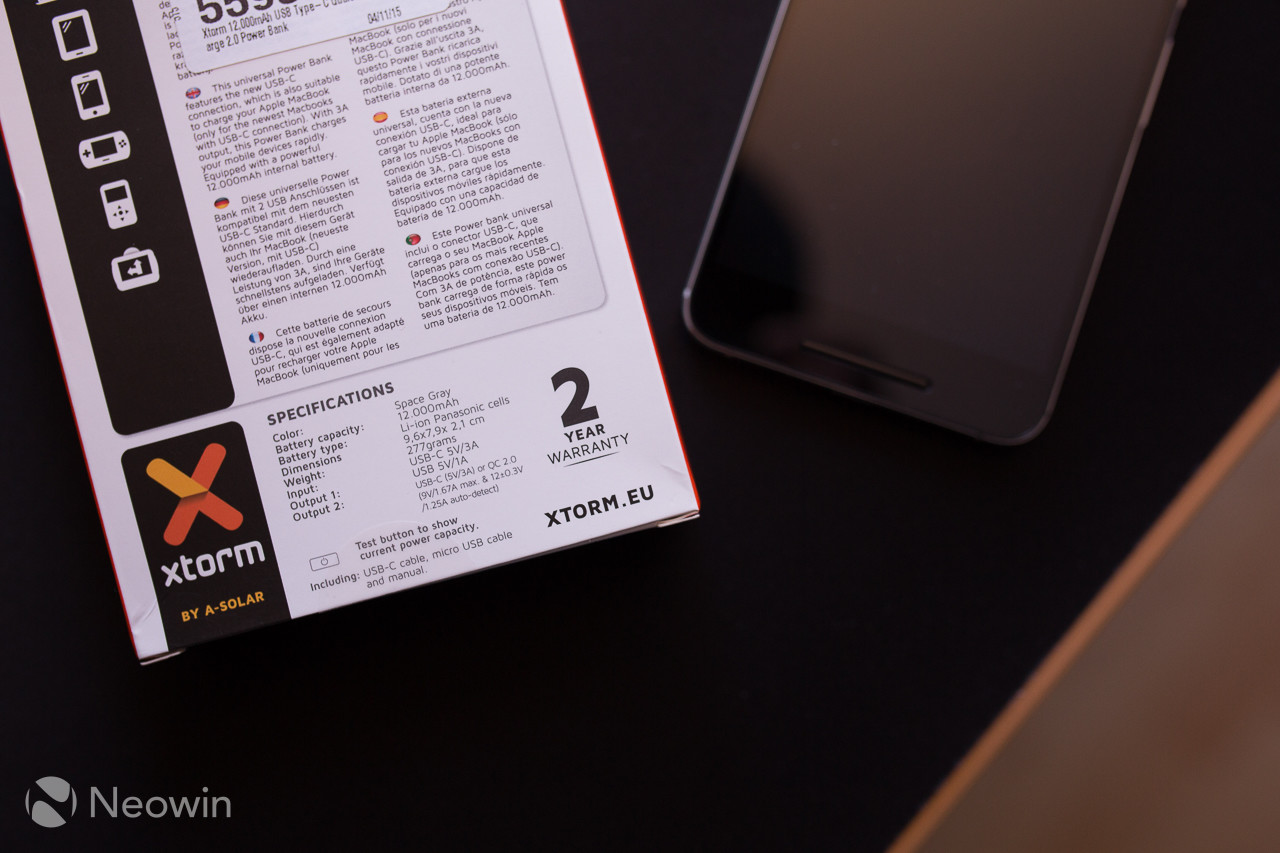 Inside the box there is only some documentation accompanying the power bank and accessory cables. It's a no-frills affair here and gets right to the point.

Speaking of cables, I found it odd that the Type-C cable was just over 25cm shorter than the MicroUSB cable. Both cables should be the same length surely! Nevertheless, the terminations are good quality and the cable itself feels tough and not that much different to other name brand third party cables such as Aukey. 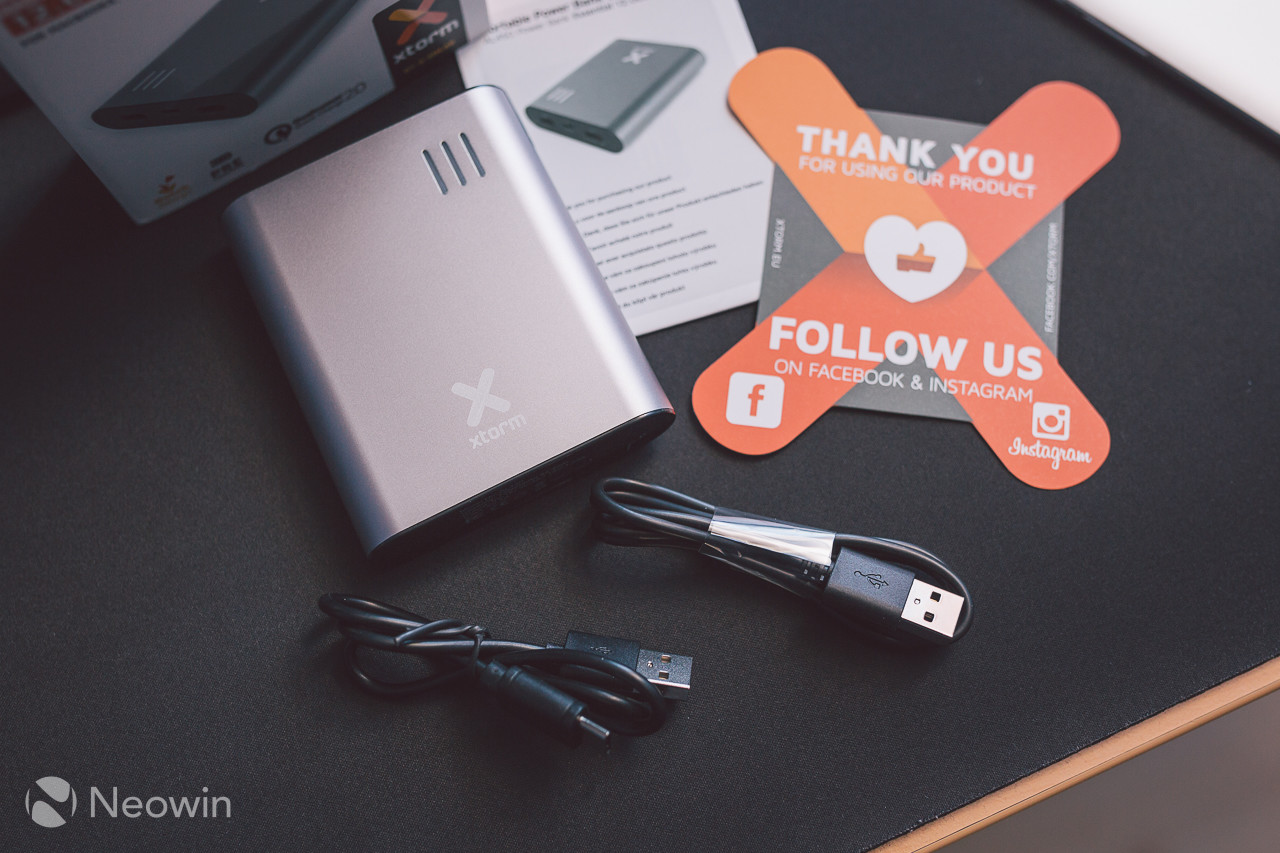 The Xtorm features 3 ports on one side. The centre USB-C port is for input only, and is used to charge the power bank from a USB power source using the Type-C to USB-A cable included. The unit is metal in construction with only each end capped in glossy plastic. It has some weight to it and feels like it could take a crash and tumble and not easily break.

The remaining ports are for their respective charging technologies, standard USB or QuickCharge 2.0/USB-C. It's peculiar having a dedicated Type-C port, but not allowing it to act as an output port I feel. 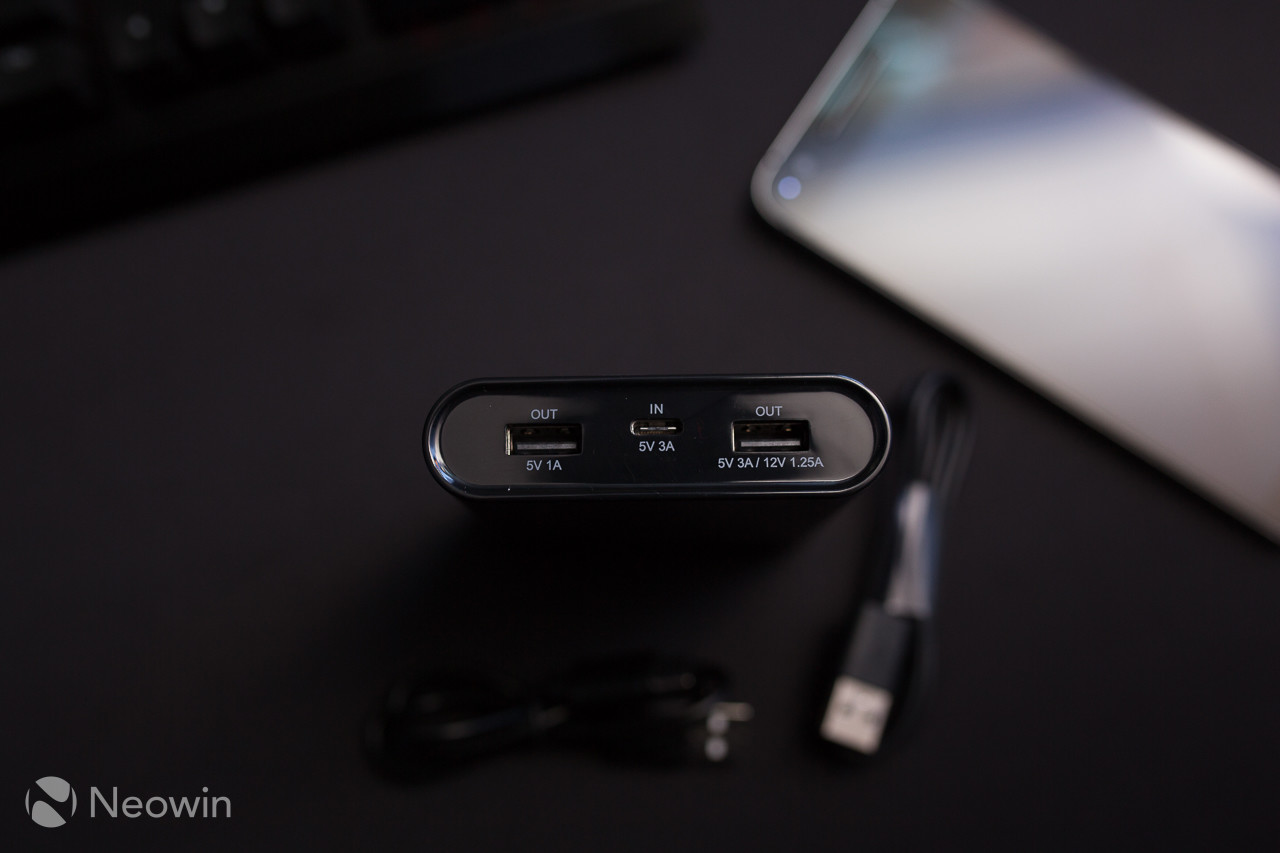 There is also a button on the side which when pressed, will show you the remaining capacity.

My Nexus 6P detected the Xtorm as a rapid charger and was charged to full from 5% in around 2 hours and 30 minutes. This is also around what I would typically get using the nexus wall charger. I didn't do any in-depth technical graphs timing charge rates but merely kept a watchful eye on it while charging and occasionally picking up the phone to check messages.

The Nexus 6P isn't the fastest charging phone on the market, but it's reassuring to know that the Xtorm power bank can keep up with the stock mains charger. 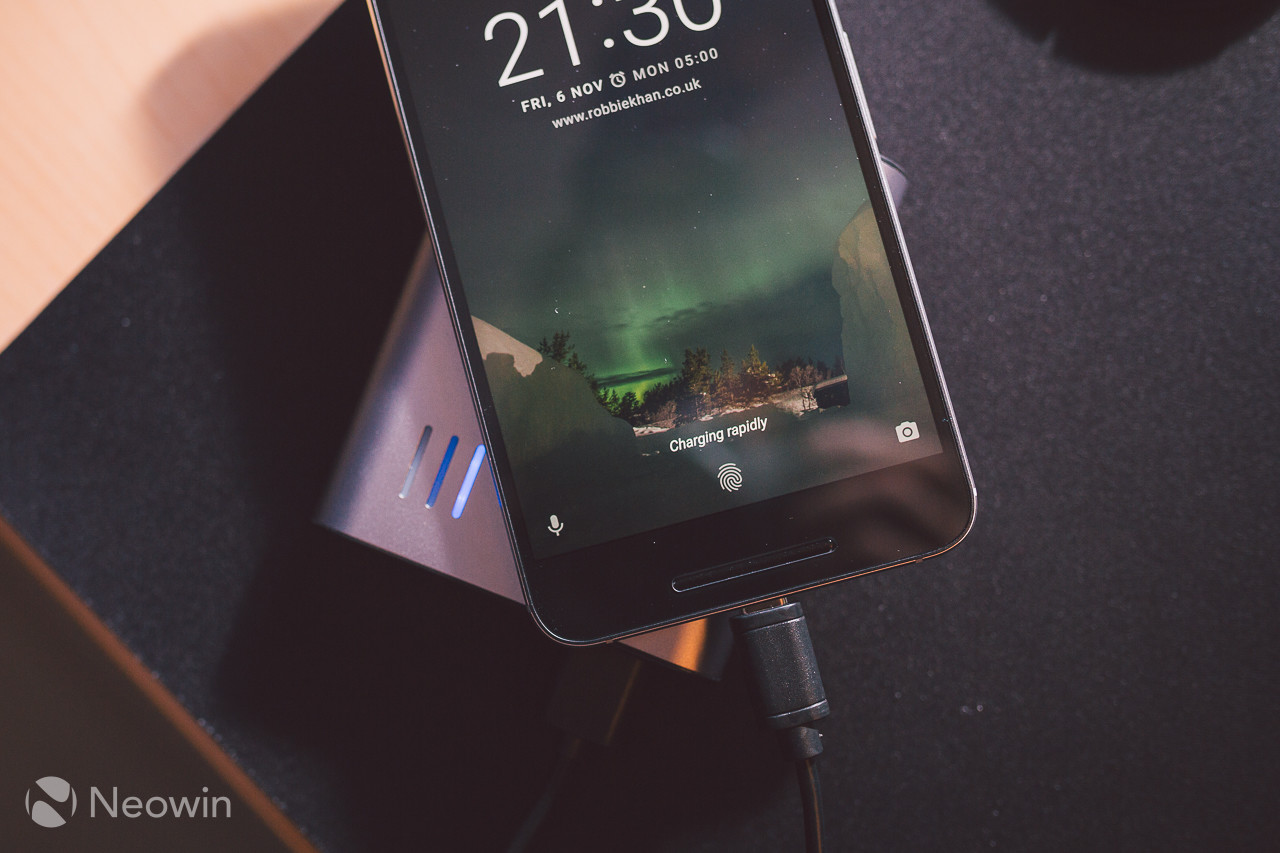 The Xtorm 12,000 power bank offers a fast and reliable power source on the move, there's no doubting this. I've been using it for a couple of months now and it has never failed.

It is not without its faults though. The remaining power indicators could have been better implemented, and the USB-C port could have doubled up as an output instead of just an input. I also think the cable length difference between the 2 bundled cables is very odd.

At this price I think that Xtorm might be reaching too far here. Models from RAVpower and Aukey are cheaper, some even higher capacity and they appear to have the above mentioned quirks resolved. Top marks for performance, but let down by a few poor design choices and an unnaturally high price compared to the competition.

With this in mind, I'm happy to give it 7/10 due to it being a solid and reliable product that has delivered the same performance each day. But I would recommend that buyers do shop around as a big saving could be made for similar performance from other reputable brands.