There have been many rumours, speculation, and subtle hints from Microsoft that the Zune brand is coming to an end, but the truth is, we don't really know for sure yet what exactly is going to happen. It's been spotted on several sites that a developer for Windows Phone 7 has stated the Zune Pass, along with several other services such as Speech, will be launched in a more complete way to other countries around the world soon. 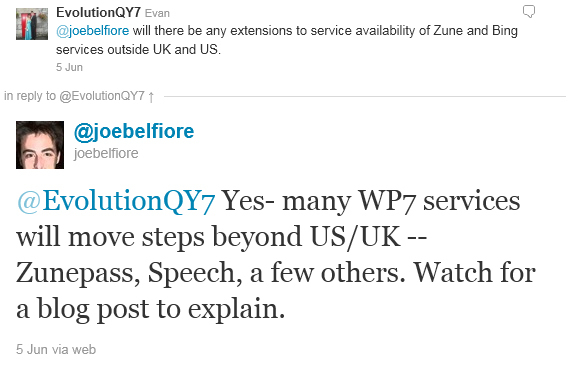 In several countries, most of the features promised along with the Zune Pass in the Zune software have a majority of functionality, but for many they've been left in the dark to what exactly they can do with their Zunes or Windows Phones. If Microsoft is planning to make their services more widely available, this could mean a wider audience for the entertainment and mobile brand the company has so far been hard at work to create.

While nothing has appeared on the Windows Phone blog as of yet, the tweet by Joe Belfiore suggests it will be up sometime soon. What will be interesting to see is what specific services will be made available to users and the sort of functionality that will come with them.

As time moves forward though, Microsoft will be trying to push out services to as many people as possible as Steve Ballmer, the CEO of Microsoft himself has stated, that Windows Phone 7 is Microsoft's last chance of getting a place in the smartphone market. Some have claimed that W{7 platform isn't performing as well as expectations had hoped for; perhaps this is part of the greater push we've been seeing with the upcoming Mango release.