The latest, major flagship title for the Xbox 360 has arrived, and it's courtesy of a brand new studio called 343 Industries. Halo 4 will surely be a blockbuster no matter which way you look at it, but you came here for my opinion of the game and that is what I shall give!

First of all, this is only covering the singleplayer portion of the game as that's the only part I have had a chance to look at before the embargo ended. I'm aware many people will be purchasing this game for the multiplayer only, so hopefully I will have my opinions on that aspect sometime in the future. Maybe once I've had some mates over for an Xbox 360 System Link party. 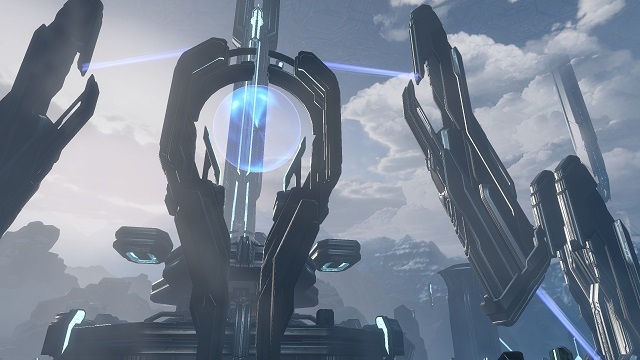 Secondly, and more importantly, I am not a fan of the Halo series. I played Halo 3 and thought it was average, slogged my way through Halo: ODST, and actually never completed the story of Halo: Reach before playing the multiplayer for a short time. Something about this series has never quite grabbed me, but as Microsoft were kind enough to send me a copy of Halo 4 I thought I would give the series another chance.

So keep that in mind, as I start with what I liked about Halo 4's singleplayer campaign.

The Epicness: Right from the word go, Halo 4 feels like it's going to be an epic game. The first cutscene sets a mood of greatness, seeing Master Chief once again, and once you actually get into the gameplay it certainly delivers. You seriously feel as if there is a war going on as soon as you enter the game world, as battles have stepped up a notch from what I remember in past games.

There's a lot of action, a lot of vast expanses to cross, and some seriously fast paced vehicle scenes. I don't want to spoil the epic story for those reading this article, because you really need to experience it - preferably with a large TV and surround sound

The Cool New Guns: There's new worlds to explore in Halo 4, and that means a variety of new weapons. Sure, some of the old favorites are back such as the Fuel Rod, Needler, DMR and classic Assault Rifle, but there's a whole bunch of awesome new weapons as well. I particularly liked the Promethean weapons such as the Lightrifle, Scattershot and Suppressor, as not only to the guns equip in a cool way, the way they fire and destroy enemies is a visual spectacle. 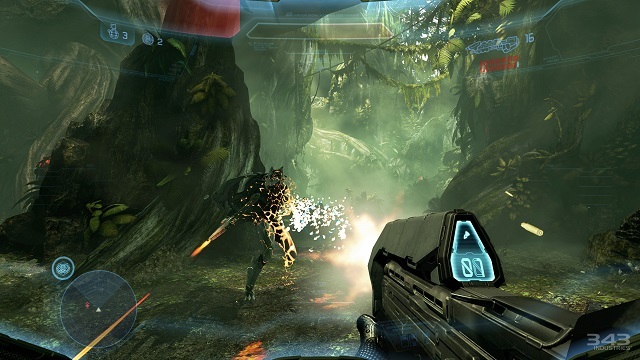 The Enemies: Along with the new guns have to come some new enemies. Of course you still get the classic Covenant from previous games, but there are also some new Promethean enemies that are the source of the cool guns. I found killing these Prometheans to be more satisfying than the Covenant for some reason; perhaps it's because I've seen so much of the old type of enemies that a break from the usual is definitely welcome.

The Covenant and Promethean forces are mixed throughout the game, so there is certainly a wider scope of enemies that you'll be facing as you progress. Naturally there are the tough ones as well as the easy ones, so make sure you choose your weaponry properly before entering an area. There were a few times where I accidentally entered a checkpoint with the worst possible weapons, and this made it hard for me in the next section. You've been warned.

The Level Design: Halo 4 is a linear game for the most part, but often it chucks you in to a large environment with a few ways to tackle the various objectives. By forcing you to traverse through complex structures, there are sometimes some cool weapon caches to discover among obstacles you can use to your advantage. Not only do the environments feel futuristic, but they also make it fun enough to engage in battles.

The Visuals: I play the majority of my games on a PC, so firing up my Xbox 360 was definitely a visual change (for the worse). That said, it does look visually impressive for a console game, and although I don't think it quite reaches the standards set by Battlefield 3 and Crysis 2, it's a clear improvement over past Halo games. 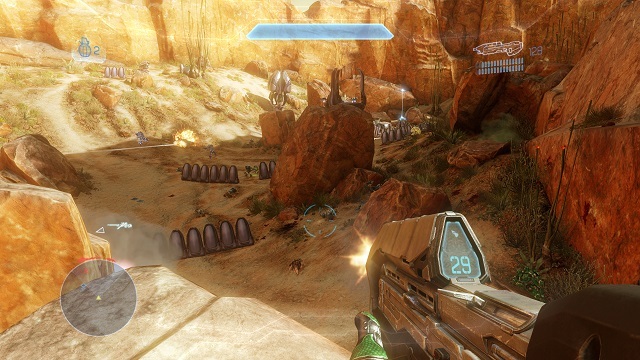 The most impressive visual element I found was the sprawling environments filled with detail and stunning textures, which surely must take its toll on the Xbox 360's limited graphical power. Also the JJ Abrams-style lighting, featuring a number of crazy lens flares, adds to the epicness of the game and really makes it feel like you're in a science fiction environment.

Face Capture: Another aspect of the visuals that really deserves its own little section is for the face capture technology 343 Industries has used to animate the facial expressions on people within the game. It looks really, really good - I would say even better than the fantastic implementation used in Rockstar and Team Bondi's LA Noire. Faces have never been particularly lifelike in games, but if this technology becomes widespread we are really in for a treat.

All The Options: I played the campaign through by myself, but don't forget there's a number of other ways to enjoy the experience. You can increase the difficulty up to a brutal Legendary mode, and then you can bring in some friends to help you so you don't die so often. And, the usual skulls make a comeback to make your playthough even harder. This is all without touching the multiplayer modes, so you're guaranteed a lot of gameplay from Halo 4.

The Confusion: For someone "new" to the Halo series like me (in that I half-finished a lot of the previous games), I found the first half of the game somewhat confusing as to exactly what was happening, and why I was doing certain things. There is a short recap that you can find within the first level, but for me this was inadequate at actually explaining what the story of Halo was.

By the second half of the story I was piecing together fragments of the Halo story, but this confusion detracted from actually enjoying the game as it should be intended. If you're a fan of Halo, don't worry too much about this, as you'll have the necessary background knowledge.

The Gunplay: My biggest beef with Halo 4 has to be the gunplay - I have never really enjoyed the way Halo makes you use guns, and it isn't my ideal first-person shooter style. I really like the ability to look down your guns sights in a game as I feel like that is the way you would use the guns in a real war scenario, but yet again with Halo 4 you can't do this and it really annoys me. I just don't like being stuck to psuedo-inaccurate hip-firing regardless of how awesome the guns are. 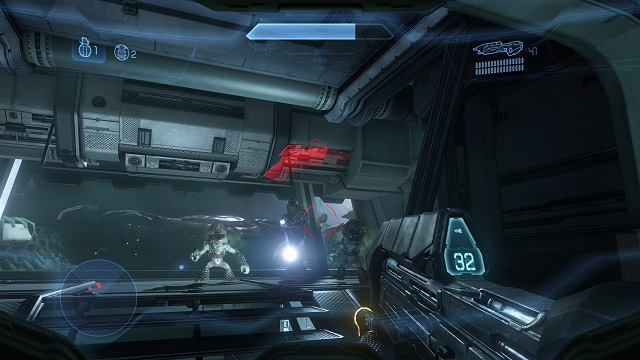 Also, again it feels like there is some sort of gameplay element that is holding Halo back from being really fun. It possibly has something to do with the way Halo locks you in to a specific method of combat, fighting the same waves of enemies with little variation. Sure, the environments may change, but the creatures you are fighting and the objectives you are doing seem re-used between each level when they probably don't have to be.

It seems really hard to explain exactly why I felt the gameplay and gunplay of Halo 4 lacked, and it's certainly not as bad as it was with previous Halo games, but I feel with such strong lore and epic storytelling that I could be enjoying it a little bit more.

The Visuals: Yes, this category appears in what I like about Halo 4 as well as what I don't like. The Xbox 360 is really showing its age, and even though I played it on a 1080p system I felt as if the game wasn't actually being rendered at 1080p. Not a huge deal as it may not be technically possible, but it was a little bit disappointing from the flagship Microsoft Studios game.

As I mentioned at the start, I'm not a fan of the Halo series and that's why it's probably inappropriate for me to give a proper review to this game, complete with a score and all that jazz. Compared to previous games in the series, I easily liked Halo 4 the best as there have been a lot of great improvements to the game's storytelling and environments. 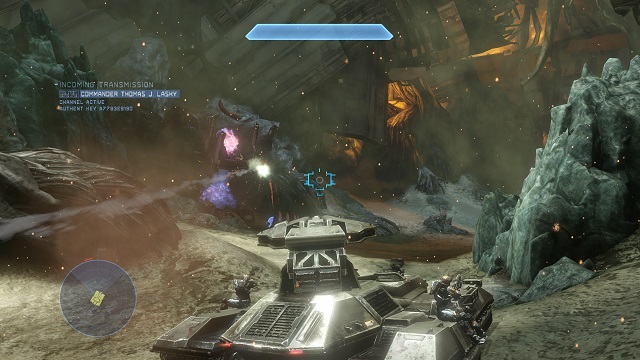 That said, the issues I had with previous Halo games still somewhat remain in Halo 4, and the enjoyment of the campaign seems to be hindered by a re-use of the same battle scenarios. Don't get me wrong - I did enjoy playing through Halo 4 - but there are elements about the way the game is constructed that don't make it as fun as it could be.

If you have liked previous Halo games there is absolutely no reason why you would not like Halo 4, and I imagine the multiplayer part of the game is quite a bit of fun. In fact, I might just go play some of it right now.

Note: Screenshots used in this article are media assets, and are not directly captured from an Xbox 360. As such they images look sharper than what is actually seen playing the game on the console.