If there’s a recent game with a stranger plot and sillier gameplay than “Sunset Overdrive,” I’m not aware of it.

Set in the over-the-top world of Sunset City, where the general public has been turned into mutants thanks to a contaminated energy drink, “Sunset Overdrive” starts off wacky and never takes its foot off the accelerator. And that’s perhaps the best way to think of the game: a non-stop barrage of utter absurdity. Don’t take that as a slight, however – that absurdity is what makes the game so much fun.

The environment of Sunset City is completely absurd, but in the best way possible.

In the shoes of your own customizable character, you traverse the open-world environment of Sunset City with an assortment of crazy weapons, such as rocket launcher that shoots explosive teddy bears. The aforementioned energy drink, OverCharge Delirium XT, is at both the heart of the game’s story and its environment, as almost everything ties back to it in some way, from the weapons to the enemies to billboards plastered around the city. As the game’s hero, you’ll work to escape the city and take down Fizzco, the company that caused the outbreak, fighting absurd foes such as a giant floating mascot that yells “die, asshole!” along the way.

The general premise certainly sets “Sunset Overdrive” apart from its peers, but the real selling point of the game – the reason it’s hard to put down the controller – is the way you traverse Sunset City.

Similar to a skateboarding game, your character will grind on railings (and other objects, such as telephone pole cables and roof edges) to make his or her way through much of the city, which is also littered with objects to jump off of like a trampoline. The game rewards you for chaining grinds, bounces and other moves by powering up your abilities for a limited time with a skill meter. It’s incredibly tricky when you’re just starting out, but most gamers should have it down pat within an hour or two. Eventually, in fact, the movement system becomes second nature, and you likely won’t even notice what skill level you’re on or how many combo moves you’ve made.

The movement system is easily one of the best aspects of “Sunset Overdrive,” but it also highlights the game’s pitfalls. Playing missions can be exhilarating as you’re always on the move, even while in combat, but it’s easy to notice when missions aren’t particularly designed with the movement system in mind. Yes, you’ll still be grinding and bouncing on objects all over the city, but it’s a bit of a letdown when “Sunset Overdrive” reverts to videogame clichés such as escort missions and retrieving objects. 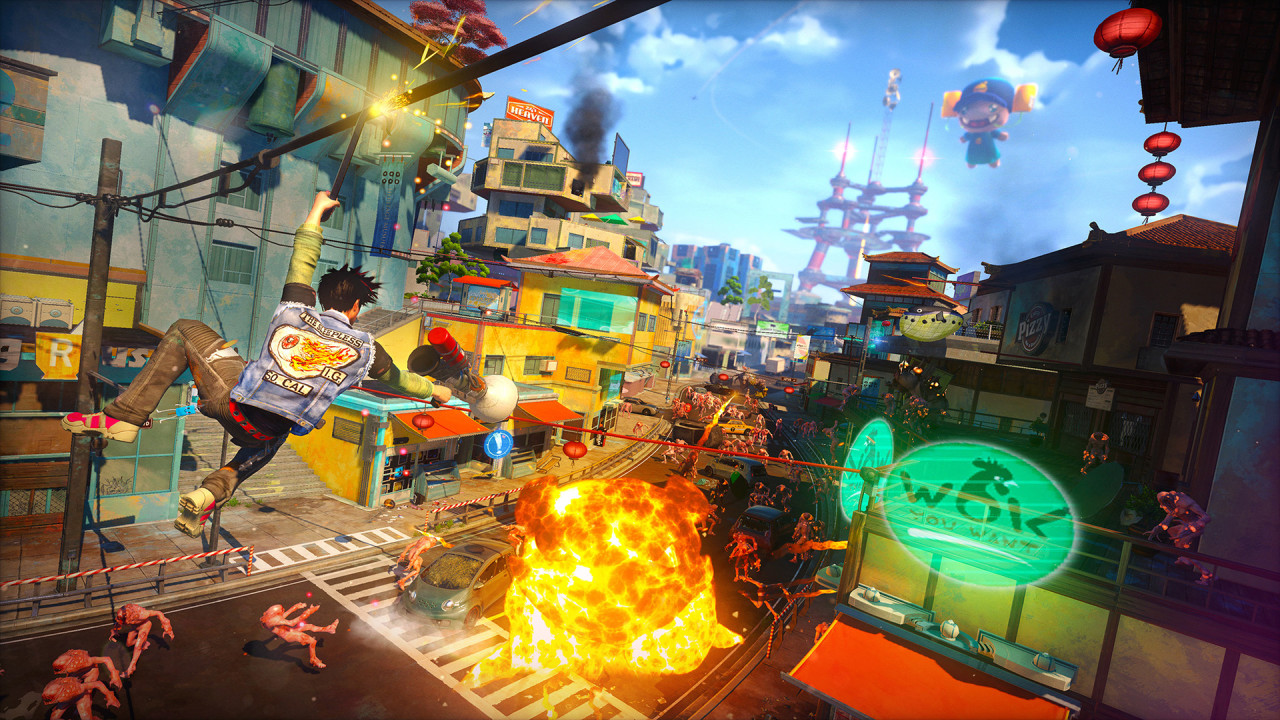 Luckily, the overwhelming majority of missions have enough charm that you feel energized to complete them. The game will often break the fourth wall and point out the absurdity of videogame stereotypes, which helps ease the rare moments of monotony; that humor also extends beyond the storyline and into the gameplay itself. Instead of forcing you to restart an entire mission if you screw up, for instance, the game will take you back to the area you messed up or died, with no progress lost. On a mission where I had to scale a skyscraper, I plummeted to what would have been my death in other games; in “Sunset Overdrive,” I fell into a portal that placed me near my blunder.

“Thanks for making me not start all over,” my character said when he was spit out another portal in roughly the same spot I screwed up at.

While they may not have reinvented the wheel with most of the missions, Insomniac’s developers understand what makes people stop playing games. “Sunset Overdrive” doesn’t hold your hand through every mission, but it does make sure that you’re not punished for dying or screwing up – you’re just given the opportunity to fix it.

This game prioritizes fun over everything else, and that tradeoff works.

That prioritization of fun is evident in every aspect of the game. You’re not given much of a plot, but you are given plenty of enemies to kill. There are three factions of enemies – the mutated “OD,” robots from Fizzco and the rogue human “Scabs” – and they each have different weaknesses. Fizzco robots, for instance, are easily hurt with electricity, while the OD take more damage from fire. You can modify weapons with “amps” to give them more power, such as a possibility of lighting an enemy on fire, and you also have amps that give your character extra powers when performing skill or melee moves.

Strangely, Fizzco, the corrupt organization at the center of the entire game, doesn’t have much of a backstory either. You never learn too much about it, though there are some optional missions and collectables that explain a little. There are also only a few missions that directly combat Fizzco, and surprisingly few boss battles – only two in the entire game are against the company. That’s not to say the characters and cutscenes aren’t excellent, however – they’re very funny and clearly crafted with care, they just aren’t necessarily integrated well into the plot.

It took me about 12 hours to make my way through the main campaign and some of the optional side missions in “Sunset Overdrive,” but it could easily take well over twice that if you’re looking to complete all the game has to offer in the solo mode. All missions, mandatory or optional, can be also replayed, as can challenges (tasks such as killing a set amount of enemies in a certain way). After that, the game’s multiplayer should tide gamers over with its strictly co-op mode, Chaos Squad. 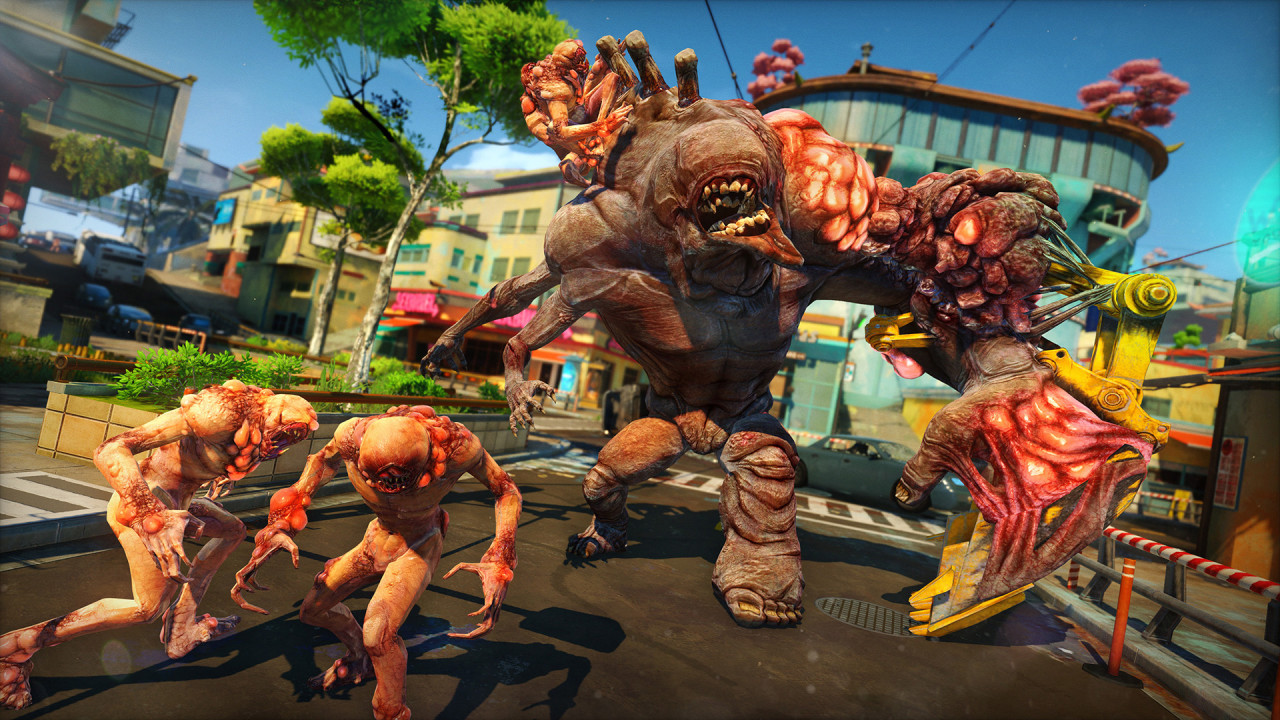 Though the campaign is clearly the focus of “Sunset Overdrive,” Insomniac has taken strides to ensure Chaos Squad ties in well with the game’s solo missions. To do that, Chaos Squad is actually launched from within the campaign itself – users will walk up to a photo booth, which will take them into a co-op session. From there, up to eight people can play a series of missions that culminate with a base protection mode, Night Defense.

Even in Chaos Squad, the game doesn’t forget its campaign roots. It’s still set in a vibrant open-world environment, and the core mechanics are the same. A major change is present, however: Users vote on which missions to play, balancing whether they want difficult or easy tasks. By selecting a mission with more “chaos,” the culminating Night Defense mission will be more difficult, but the rewards – in-game benefits that carry over to solo play – are better after you beat it.

Whether co-op is successful remains to be seen, but it's still entertaining.

Co-op isn’t quite as fun as the campaign, as it lacks the humor and scope of the solo mode, but it should still be entertaining to most gamers. Unlike the co-op mode in other games, Chaos Squad will be different each time it’s played, as the missions are randomized, though they lack the depth of the missions found in the campaign because of that. It’s hard to say just how popular Chaos Squad will be, but I expect it will have a decent lifespan given how well it integrates with the campaign and the benefits the game offers for switching between the two modes.

That connectedness is one of the coolest parts of “Sunset Overdrive,” in fact. Instead of being dumped in a screen where you have to wait for other players to join a co-op session, you can keep playing the campaign if a match isn’t immediately found. The game will search for a Chaos Squad match in the background while you keep playing the solo mode, and a small notification will remain in the lower right corner of your TV to indicate the search is ongoing, that way you don’t forget.

From a technical perspective, that’s just one of the highlights of the game. The graphics are also gorgeous, with a vibrant color palette that matches the game’s fun vibe, and the voice acting is superb. The artistry of the game’s cartoonish punk style is second to none, and that’s matched by the work behind the curtain. There’s constantly an abundance of enemies onscreen, and most of the time they’ll be exploding; despite that, I didn’t encounter a noticeable slowdown at any point during the hours I poured into the game. There aren’t as many enemies onscreen at any given point as there are in “Dead Rising 3” by any means, but it also doesn’t suffer that game’s pop-ins or slowdowns. 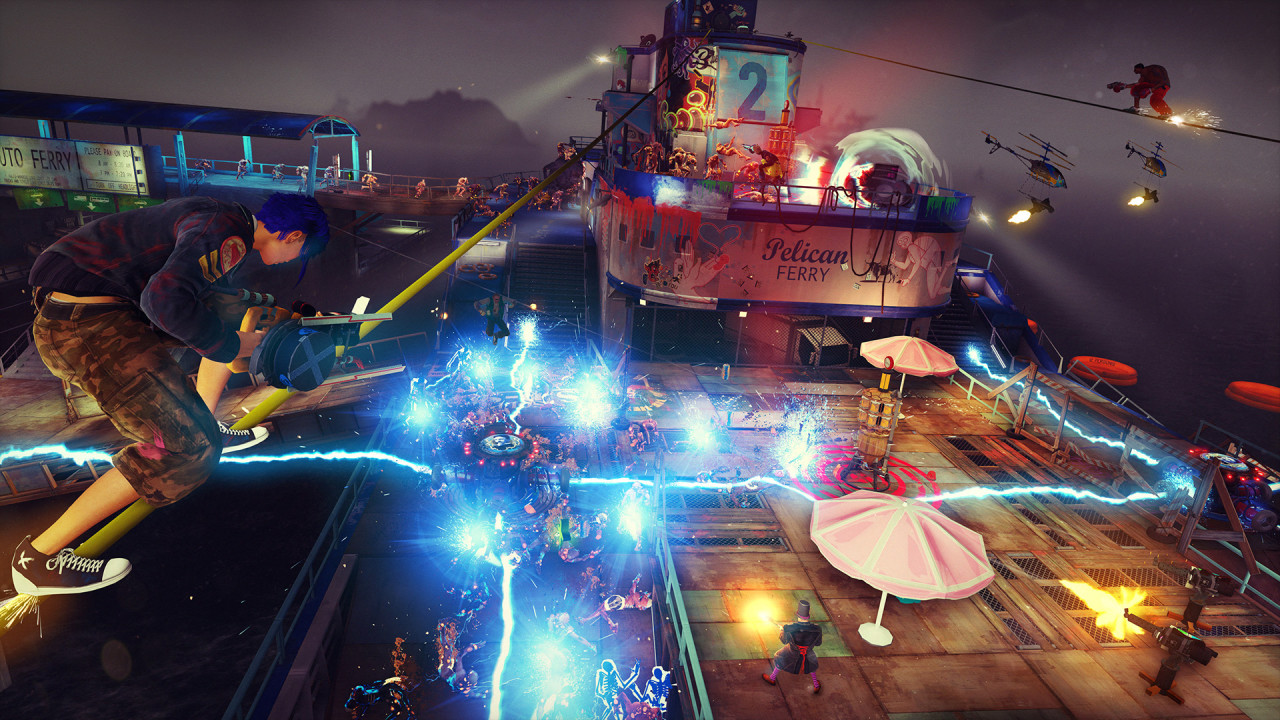 Lots of pieces go into making a good game, but the most important aspect is whether it’s fun to play, and “Sunset Overdrive” passes that test with flying colors. There are minor faults along the way, but you’d be hard-pressed to care much about them as you’re grinding on rooftops and bouncing off cars while killing thousands of mutants and grinning at the game’s irreverent humor. If you’re the least bit interested in having fun and own an Xbox One, get “Sunset Overdrive.”

“Sunset Overdrive” was reviewed using a digital copy of the game provided by Microsoft.