A little slow on the release front again this week with November being the big month for games but we have still managed to review "The Evil Within" on the PC, a third person horror title that is brimming with gory atmosphere. We also have our blast from the past in the form of "Dungeon Keeper 2" back from 1999.

The Evil Within has been a long time coming, first announced a few years ago it seems to have taken quite a lot of work to produce. The horror title comes from Tango Gameworks and the mind of Resident Evil creator Shinji Mikami, some saying that the game is the real successor to the well-loved Resident Evil 4 game.

Today we are covering the PC version of the game, although we have also briefly played the PlayStation 4 version too, the PC version is the one we have played through most and had in-depth control over.

The Evil Within is played via a third-person view in which you will shoot, collect items and learn to hide. You play as Sebastian Castellanos, a police officer who finds himself in various strange locations which have you questioning what is real and what isn’t.

For a game that seems to want to tell a story it is very hard to understand what the heck is going on half the time, it also suffers from poor writing and a haphazard plot despite some very atmospheric settings and hideous looking enemies.

The game isn’t always played out as an action game, the best way to experience the Evil Within is by stealth, creeping around the levels and taking out enemies from behind seems to cause the most genuine feeling of horror and higher heart rates that the game probably intended from the outset. The stealth play also allow you to disarm some of the bombs and traps that are littered throughout the levels.

That isn’t to say that the game doesn’t have its fair share of weapons, from revolvers to crossbows which allow you to burn, decapitate or even electrocute enemies. Through the game you will also collect up green vials of liquid after taking down enemies, breaking boxes or searching through drawers. These vials can then be used to upgrade your abilities during some of the dream sequences.

Despite some enjoyment the game can suffer from some very clunky dated controls, the black bars along the top and bottom of the screen don’t help either, except from a cinematic perspective, the game would have benefitted from not being so close up to your character.

Graphically the game is very mixed bag, on one hand you have some very atmospheric locations, some good texturing (at times) and some very good enemy designs. On the other hand you have a poor frame rate, some dated textures, a lot of bugs and those black borders which were either these for cinematic effect or to try and improve the framerate.

The Evil Within also uses ID’s engine which was designed specifically for 60 frames a second gameplay, so when you have a game which sometimes struggles to maintain 30 fps even on some very good hardware then there must be a problem somewhere.

Sound is pretty good with some excellent music and some decent, if not earthshattering voice work. The effects can be scary at times, especially when you are playing on a decent audio setup or with a good headset on.

So in the end The Evil Within isn’t anywhere near what we hoped it would be, it isn’t a bad game, but it never rises up above average. The performance of the game also isn’t great and could have benefited from even longer development time. If horror games are your thing, you may well have been looking forward to this one, but if I were you, I’d hold back a few weeks until it drops down in price.

This is a review I first wrote way back in 1999 and was one of my first pieces of game coverage. The original Dungeon Keeper broke new ground having you play as a baddie for the first time, it also had some excellent gameplay and features that live on today in some titles. No game has come close to matching Dungeon Keepers style and atmosphere and the recent iOS release of the game was an unmitigated disasters thanks to filling it full of in-game purchases. 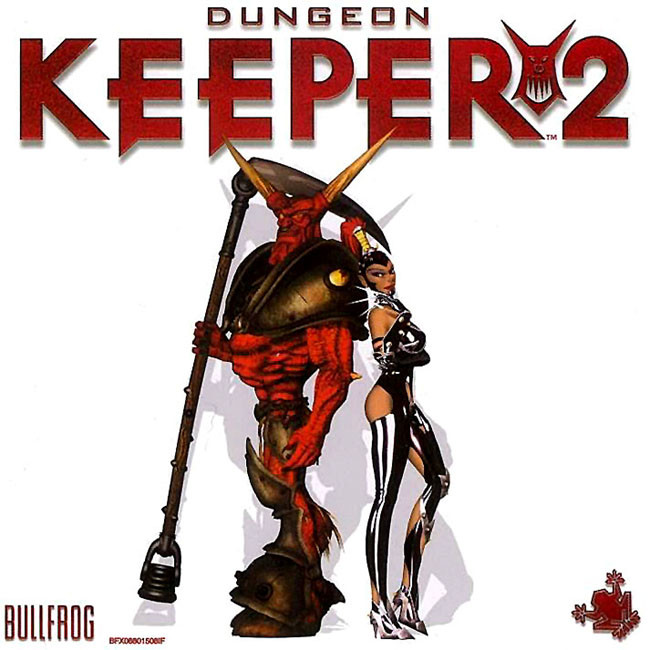 The Heroes have returned, determined to thwart your plans of reaching their sunlit world. Can a pact with the mighty Horned Reaper finally enable you to realize those dreams of desecration? Only by satisfying the cruel needs of your dungeon minions, while striving to crush the foolish adventurers plundering your domain, will you prove yourself a worthy Keeper.

Once I had took the CD out of the box and read through the reference card explaining on how to set up the game, I put the CD in the drive and Autoplay kicked in. You are presented with a variety of options which include Install, Read the Readme file, and Quit to desktop. The installation program ran smoothly without any problems, Dungeon Keeper 2 installs just over 250 MB of data onto your hard drive. Once installed you are given the option to have a shortcut placed on the desktop.

Once the installation had been completed, you are ready to dive into the game. Just click on the icon on the desktop and you are ready for the intro. The intro lasts around 3 minutes and is well animated. Once the intro has finished you are presented with a nicely animated options menu all in 3D. First thing we did was to check that the correct 3D card was being used by the game. Thankfully DK2 had already selected the Voodoo 2 card and had also selected the 800*600 resolution to play the game.

Here are a list of menu options that you are presented with:

To say that if you played Dungeon Keeper you have pretty much played Dungeon Keeper 2 is pretty much close to the truth, but there are a number of new features that manages to make it an even better game than before. If you haven't played Dungeon Keeper then here are the basics. You control the dungeon and all the aspects behind it such as choosing where you want to build rooms, building the rooms for your minions, rooms to hold the gold your imps collect from digging, training up your creatures, building a library so your warlocks can study new spells and slap the imps to make them work harder. The main objective behind the game is to attract as many creatures to your dungeon as possible, crush any rival dungeon keepers and expand your empire in a quest to reach the daylight and invade the world above. 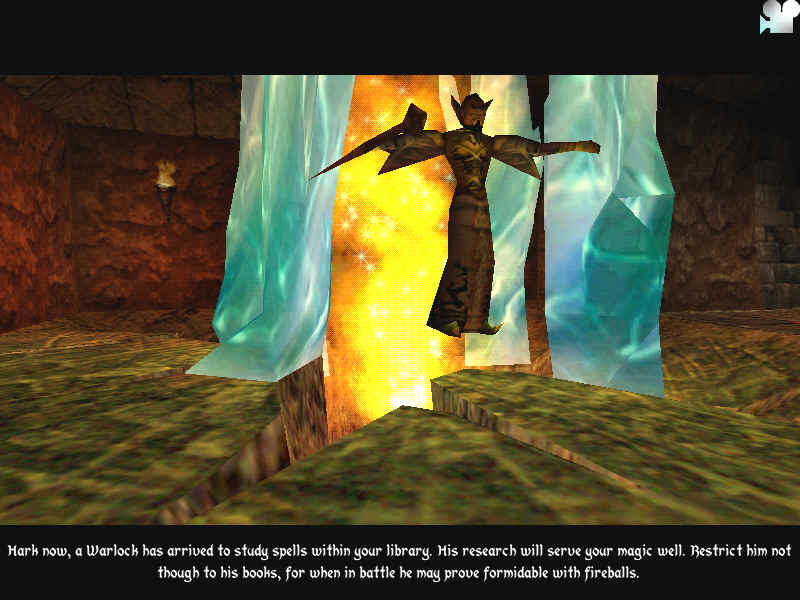 During the game enemy knights, other dungeon keepers, creatures, walls, lava and water can block your way and it is your task to find a way to overcome these obstacles. While you are playing the mentor guides you through the first few levels teaching how to use the new tools at your disposal such as creatures, rooms, skills and spells. The mentor in Dungeon Keeper 2 is far better than in the previous game, mainly down to the fact that he gives a lot more information and advice on the first few levels.

At the bottom of the screen there is a creature’s panel which features information about the various creatures at your disposal. It allows you to buy new creatures, pick creatures up, tells you what mood the creatures are in, such as happy (Make them happy by creating casinos or dropping gold on their head), unhappy and angry. These moods can be affected by slapping creatures to make them work harder, although if you work them to hard they will be on their way back to the portal to leave you. Also on the panel is information about jobs, fighting, training and miscellaneous. The panel can also be changed to show room information (buying and selling rooms), spell section (explains when new spells have been revealed) a message window and objectives.

At the top of the screen is an information bar which not only contains the amounts of gold, mana, and the Dungeon Heart rate, but also contains a ticker bar which scrolls along information about Dungeon creatures when you put the hand over them. 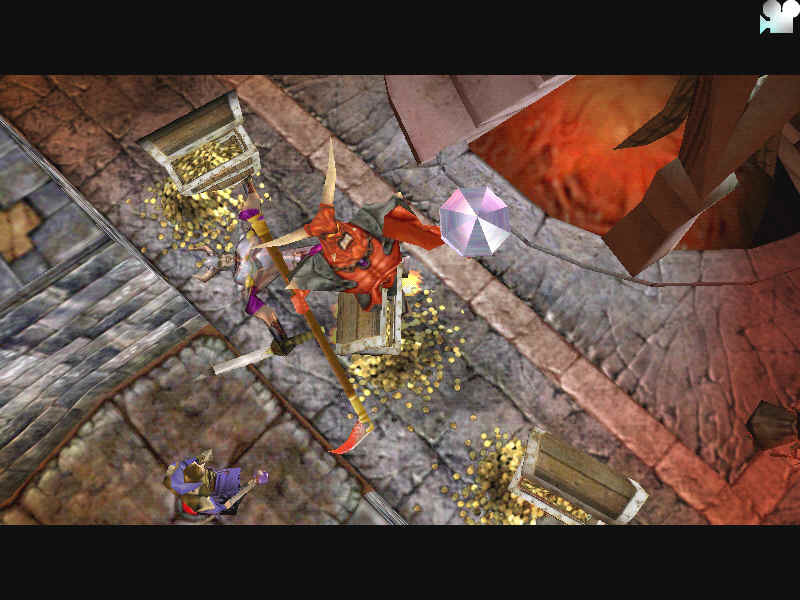 This is where Dungeon Keeper 2 has really had an overhaul. Gone are the 2D features that previously inhibited the first incarnation of the game. Now the game is fully 3D accelerated for a mass of different 3D cards. The most notable change in the graphical department is the large range of new special effects such as fire, spells, water reflections and wall rubble. The animation of every creature and character in the game is far and away greater than in the original game.

One noticeable difference in Dungeon Keeper 2 over the first game is the appearance of in-game cut scenes. While some of these are excellent quality and use the 3D game engine, others can be slightly blocky in appearance. Also despite having cut scenes using the engine, certain scenes also use video animation which makes it feel a little disjointed as we would rather see one or the other used throughout the game.

The 3D accelerated engine really makes a difference over the first game, I remember when Dungeon Keeper got a Direct3D patch released and many people were left disappointed with the quality, well we can safely say that Bullfrog have redeemed themselves with the graphics in Dungeon Keeper 2.

The sound hasn't really changed a great deal over the first game, although the sound effects are much clearer, they seem to have used the same actual sounds from the first game for Dungeon Keeper 2. The music is also a little disjointed for our liking, while some pieces of music really reflect well on the dark mood of the game, other more rock like tracks seem really out of place. We are also a little worried because it seems that the musical track "Disco Inferno" appears in the game. There is some excellent speech throughout the game from your mentor which really bellows through your speakers.

While the graphics engine is a major improvement over the first game there is very little in the way of new features, but the new features that have been put into this already excellent game do improve the gameplay a whole lot. If you are already a fan of the original then you will love the new graphics, but if you didn't like the first game, you won't like the second either. It is that simple...but we still recommend it to all you dark trainee dungeon keepers out there.

Next Week: We have hope to finally have a full review of Driveclub on the PlayStation 4, Lords of the Fallen on PlayStation 4 and Styx Master of Shadows on the PC.