Earlier in the week, some Windows 11 Dev Channel users spotted Start menu ads/promos encouraging them to back up their data to OneDrive, sign up for a Microsoft account, and complete their profile. This obviously opened the door to lots of conversations over on social media platforms such as Twitter as well as the comments section on our own coverage as the majority of readers proceeded to bash Microsoft for pushing what they believe to be advertisements in their OS.

To be fair, this backlash isn't surprising. Microsoft has previously been caught red-handed testing advertisements for Microsoft Editor in the File Explorer. At that time, the company quickly removed them, claiming that they were not meant to be published externally. Even then, I expressed concern that while the banner ads were published accidentally this time, the real problem here is that Microsoft is definitely playing around with this idea and there's no knowing when the tech giant decides that it's the right time to green light this initiative for the public.

And before I go into further details, I'd like to emphasize that I personally don't believe that all of these promos can be clubbed into the "ads" category. I feel that some of these actually are good recommendations, depending on how you look at it. For example, the recommendation to back up data to OneDrive is something that you can do with the 5GB of free storage too, you don't necessarily need to sign up for premium capacities. Now, should tips/recommendations be shown in the Start menu? That's another debate altogether (but "no" is my opinion).

And this is not a Windows 11-only problem either. Just to check, I opened my Start menu in Windows 10 and right at the top is a promo for Microsoft Edge, you can see it in the screenshot above.

Similarly, look what happens when I search for "Download Google Chrome" on Microsoft Edge versus "Download Microsoft Edge" on Google Chrome. Note that I do not use any ad-blockers or other enabled extensions on either of the two browsers. The widget below is a slider so use the button in the center to drag across the two experiences horizontally: 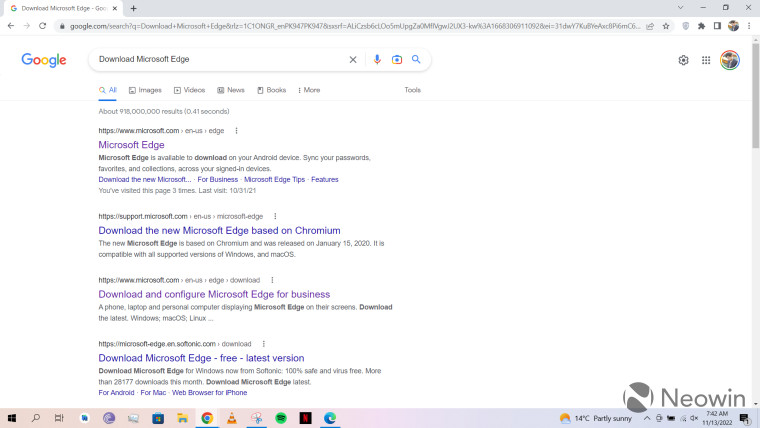 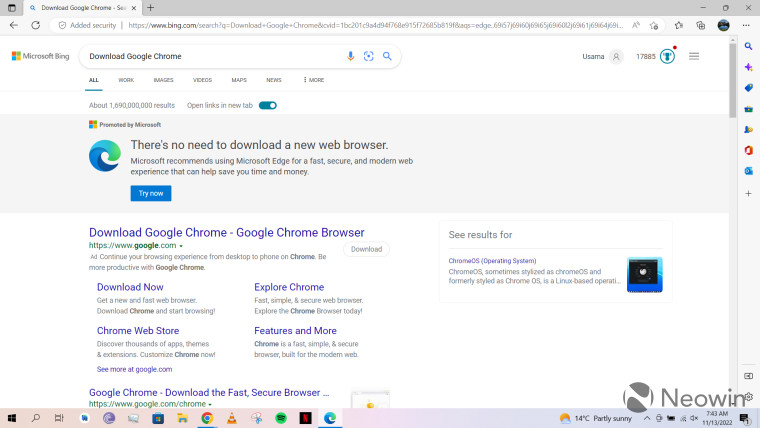 The difference in user experiences is night and day. In fact, we also learned a few days ago that Microsoft is hiring people to build subsidized Windows experiences that recoup their investments through ads and promos for Microsoft services.

What I'm trying to emphasize here is that there is precedent for ads in Windows 11, Microsoft has been doing it for years with just the occasional pushback from users and media outlets like us. There is just some short-term outrage from consumers and then things settle down until the next round of "promotions" hit our software.

And to be fair to Microsoft, I completely understand the appeal. You are offering an OS upgrade to hundreds of millions of customers free of charge, you have to recoup your investment somehow. However, is it really a free upgrade if, as a consumer, you're almost constantly being barraged with advertisements for Microsoft services? From locking your Windows 11 PC through the Start menu to opening Microsoft Edge? Is the monetization opportunity worth deteriorating the user experience for millions of customers who just aren't interest in the upselling options?

I think Microsoft is banking on "yes" being the response for all these questions, which is why we are seeing continued effort in this space over the past few years. You could argue that many promos can be disabled through Settings, but should a customer be expected to do that just to get a vanilla experience?

Don't get me wrong, I'm a Microsoft customer through and through. I've only ever used Windows as my primary OS, leverage the Microsoft suite of enterprise and developer tools at work, and have been a Microsoft 365 Family subscriber for the past several years. But none of these things happened because of ads, they happened because I either loved the products (Windows) or felt a need for them (Microsoft 365).

The real problem now is that the consumer experience on a lot of Microsoft services is deteriorating to the point that I have begun to dislike and avoid a lot of them. Ads are not even contextual, I still get ads for Microsoft 365 even though I've been a subscriber for years. It's like Microsoft is shooting an arrow in the dark rather than using all the Microsoft account or telemetry data about us to show ads that might actually be useful.

Instead Microsoft's strategy seems to be that surely if you show ads for Microsoft 365 to hundreds of millions of customers, at least a million might subscribe. But what about the user experience being ruined for the other 99% or the target audience? Microsoft doesn't really care, because hey, it got a steady revenue stream from the other million who subscribed.

And that really is the thesis of my entire piece. I completely get why Microsoft is going in this direction but I also think that it's a pretty bad experience for most of its end-users. At this point, I'm wondering if Microsoft should consider spinning off another SKU of Windows. One would be the free version with these advertisements and the other would be a one-time perpetual license for an ad-free Windows experience. Would people pay for it? Only time will tell, but it'd be nice to have the option in consideration for people who are really annoyed with ads.

While I can understand from Microsoft's lens as to how this is good for revenue, I would argue that ads for upselling Microsoft services should be in relevant spaces instead of stuffing them in main UX elements. For example, OneDrive promos/recommendations should be shown in storage settings rather than in the Start menu. But until something like that happens, I fear as a consumer for what's next.

Does the current implementation of advertisements/promos/recommendations annoy you? Do you even consider them as advertisements? Would you consider paying a one-time fee to get rid of them? Let us know your thoughts in the comments section below!