If you wanted to get a free email account back in 2004, there were plenty of options; there was Hotmail by Microsoft, and Yahoo Mail was also popular. However, the launch of Gmail by Google 10 years ago today was regarded by many people as a joke at first.

It didn't help matters that Google chose April Fools' Day to make its official announcement; lots of folks thought it was a prank. Google claimed that Gmail offered 1 GB of free storage, which was well above what Hotmail and Yahoo Mail gave to its users. The idea of being able to search for words inside emails was also new, as was turning mail messages between people into "conversations". 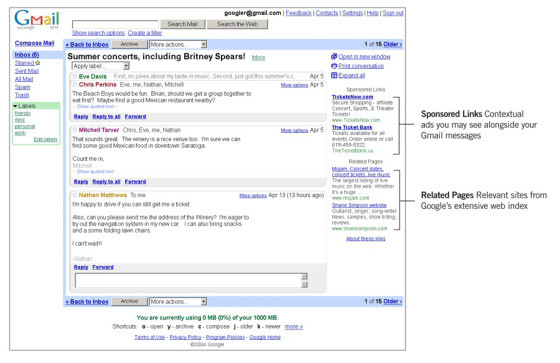 This Google Gmail image from 2004 shows how ads, or "Sponsored Links", looked inside the client.

10 years later, Gmail is now one of the world's biggest free email sources, and has replaced the regular email desktop client for many users. However, as Time points out in a new article, Gmail had a lot of skeptics inside the company while it was under development but it's now one of the company's most well known services, thanks in part to its use of ads generated by the emails of its users.

Paul Buchheit created the first version of Gmail simply by making a search engine for his own emails while at Google. Later, the small Gmail team developed the front end using JavaScript, which enabled it to add features that the HTML-based Hotmail could not use.

When the service did launch, only a few outsiders were asked to use it and soon getting a Gmail account was considered to be the new hip thing in the tech industry. People actually started selling Gmail invite codes on eBay until Google stepped in and made that practice illegal. Gmail didn't open up to everyone until 2007 and the beta label itself wasn't removed until 2009.

Many people were not happy with Gmail scanning their email messages to create the "Sponsored Links". Indeed, California state senator Liz Figueroa announced just a few days after Gmail's launch she would write a bill that would ban such practices. That version of the bill never became law, but many people and companies, including Microsoft, still don't like the fact that Gmail creates ad links from the messages of its user's emails.

Even with that controversy, there's no denying that 10 years after the launch of Gmail, it changed the face of emails for many people. It also changed Google from just a search engine to a company that offered free web-based tools which have expanded and improved to this day.