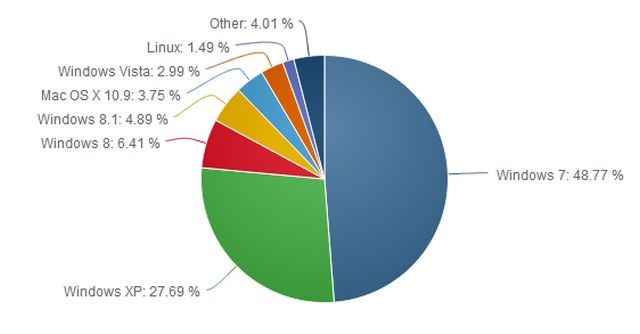 One week from today, on April 8th, Microsoft will release the final public patch for Windows XP, over 12 years after the OS was first launched. However, it looks like XP will still be used by a large fraction of PCs worldwide when support is cut off, according to the latest data from Net Applications.

The firm, which collects unique user stats from its tens of thousands of websites, has posted its March 2014 operating systems numbers. They show Windows XP is being used by 27.69 percent of all PCs worldwide. While that is down compared to February's numbers of 29.53 percent, it still shows that XP is still the second most used operating system in the world, behind Windows 7 at 48.77 percent.

However, the focus this month is on Windows XP and the fact that Microsoft will soon cut off support to an OS that many people around the world are still using inside their PCs. While the general public won't get any more XP updates after April 8th, many companies such as banks and even parts of the U.S government will pay big bucks to Microsoft for extended support contracts that will allow them to get updates until they upgrade to a more recent version of Windows.

Even though Microsoft has been warning the public for years about the XP support cut off date, and the dangers in continuing to use the OS beyond April 8th, there are some parties out there, such as the anti-virus company AVAST, who believe Microsoft still needs to keep XP software updates going for a while longer. It won't be long before we know which strategy is the correct one.