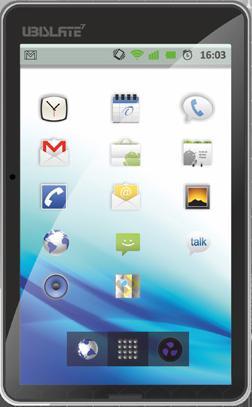 Ubislate, the general-public version of the original Aakash tablet.

You need only look at the market for tablets to see that was once a flight of fancy among companies is becoming a very relevant area of the market. With some cheap Android tablets hitting the £80 mark, they're quickly approaching the realm where they could be bought as Christmas gifts.

India's tech companies are also moving into the tablet market, but doing so in a less conventional manner. The Aakash tablet, which you might remember, made some waves due to the ridiculously low price point of

Alright, so the specs might not be setting speed records but for the price it can't be too bad. The name 'Aakash' comes from the Hindi word for 'sky', and is loosely translated to mean 'upper sky' as well.

Students at engineering colleges and universities will be first to get their hands on the Aakash-2, for a lower price point than anyone else. The government will subsidize the tablet, bringing prices down from $35 to a pocket-friendly $20 for students. The hope is that other state governments could step in and further subsidize costs until these devices are free for students.

If the older model is anything to go by, a general-public version will also appear (the original Aakash for the public was called the "UbiSlate"), at a slightly higher price. The UbiSlate 7Ci is a commercially-available version of the Aakash-2, using the same specs as listed above.