We've known for some time now that Nokia plans to launch two new Lumia handsets in the next few months: the 'EOS', with a high-end PureView camera - and possibly a quad-core chipset; and 'Catwalk', a thin-and-light device with an aluminium body. Yesterday, further details emerged on these and other Windows Phones, including the Samsung 'Cronus LTE' and HTC's 'Tiara'.

Beyond these handsets, it's also been speculated for some time that Nokia has been working on a Windows Phone 'phablet'; indeed, just two weeks ago, we reported on claims made by The Financial Times that such a device is in the works. 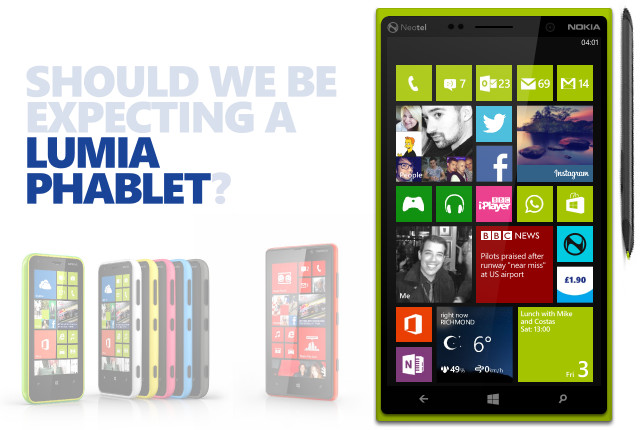 A Lumia phablet seems inevitable - but will it look anything like this? Your guess is as good as ours.

The FT isn't alone, as the UK's Mobile Magazine also claims to have learned details about Nokia's upcoming bigger-than-phone-smaller-than-tablet device, although it has not specified the source of its information. It claims that Nokia plans to launch the phablet in the fourth quarter of this year, ahead of the lucrative holiday season. It's said to have a six-inch display, and - no surprises - it's expected to run Windows Phone 8. Previous reports have indicated that its display will feature 1080p resolution.

Significantly, Mobile also claims that the device will cost around £400-£500 GBP (roughly $620-$775 USD / €475-€590 EUR). That's the same pricing territory currently occupied by Nokia's current Lumia 920 flagship, and with more premium handsets launching soon, it would certainly be unusual for the company to price its largest Windows Phone handset around the same price point as smaller, lower-resolution devices.

In a conference call with investors, after Nokia's Q1 2013 financial results were published, CEO Stephen Elop declined to address phablet rumours specifically. He did state that Nokia is continuing to experiment with "broader form factors and different things that we can do" which, on the face of things, certainly seems to support the idea of a phablet. He also said stated that the company is about to begin "a season of new production introductions", hinting at plenty more devices on the way.

Beyond the giant Lumia, it's claimed Nokia is still committed to the fairly unpopular practice of launching devices under carrier exclusivity arrangements, with Mobile Magazine saying that the company has been seeking a "preferential UK operator" to launch a new "hero device" - although the article also appears to claim that that device is the Nokia Lumia 928. That wouldn't make a great deal of sense, as the 928 is simply a Verizon-specific variant of the Lumia 920 - albeit with a few tweaks to its spec - which has been available in the UK since the launch of Windows Phone 8 last year.

This odd oversight, combined with the questionable pricing claims, might undermine the claims made by Mobile Magazine, but whether or not the specifics of that report are accurate, it seems inevitable that we'll see a Lumia Windows Phone with a larger form factor soon. Other manufacturers have cashed in on the increasing popularity of such devices, and even industry analysts have noted that Nokia can't afford to ignore the phablet phenomenon for much longer.

Improvements to the Windows Phone platform itself have already been hinted at to accommodate devices with larger form factors, higher resolution displays and quad-core chipsets, and even adjustments to the user interface, such as supporting an extra 'column' of tiles on the Windows Phone Start screen. These enhancements are expected to be made available in an OS update known as GDR3 (General Distribution Release 3) later this year, which would appear to coincide nicely with the launch of a Nokia phablet towards the end of the year.