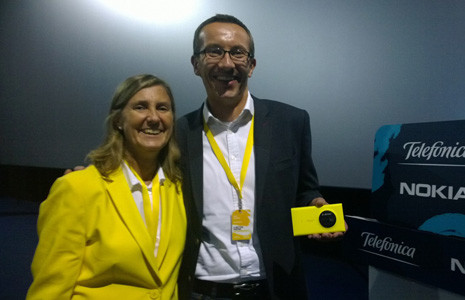 While the U.S. was the first market to get the Nokia Lumia 1020 with its 41 megapixel camera in July, there have been rumors that Nokia was working with Telefonica to launch a version of the smartphone with 64GB of on-board storage, double the amount on the current U.S. version. This week, both companies confirmed that the 64GB Lumia 1020 will be launched later in September in parts of Europe, where Telefonica operates under the o2 name.

In a post on the Nokia blog, it quotes David Johnson, the General Manager Devices for o2 in the UK as saying, "We think there’ll be a lot of demand for a 64GB device. Because the phone shoots high-resolution pictures, there’s a lot of demand for storage." There's no indication that the 64GB model will make its way to the U.S.

While the Nokia blog post did not offer a price or a release date for the 64GB Lumia 1020, the o2 website shows that the phone will launch on September 25th in the UK in both yellow and black with prices starting at zero and going up to 639.99 pounds, depending on the contract and phone plan. o2 in Germany also is taking pre-orders for the phone, which will be priced at 679 euros without a contract or for 27.50 euros a month with a 19 euro down payment.