The latest tracking statistics regarding Windows phones have recently been published by AdDuplex, a company constantly monitoring usage across its network to build a monthly report on how the Windows Mobile ecosystem is doing. Each month, these reports capture a snapshot of the worldwide usage across one 24-hour period, which in this case, April 25th, 2016. 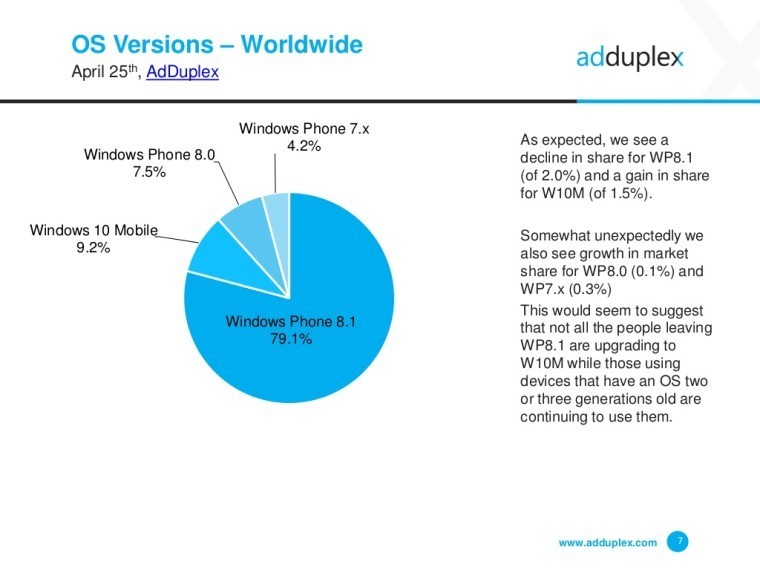 With the official release of Windows 10 Mobile to the public, the new OS continues to grow, increasing by 1.5%, recording a share of 9.2%, compared to 7.7% last month. Moreover, Windows Phone 8.1 saw quite a sharp decline of 2.0%. AdDuplex presumes that with this recorded trend, not everyone leaving WP 8.1 is hopping onboard to Windows 10 Mobile.

The firm also recorded an increase in old versions of Microsoft's mobile OS. Windows Phone 7.x rose by 0.3%, and Windows Phone 8.0 by 0.1%, suggesting that people who own devices running these OSes still opt to continue using them. 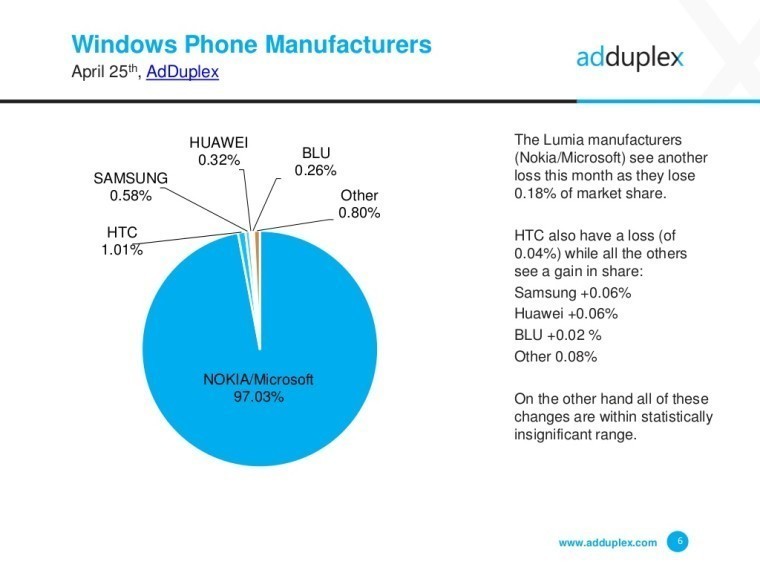 Microsoft's share of the Windows phone pie has always dominated over other manufacturers, and that continues today. Albeit dropping by 0.18%, the Redmond giant is still seen king of all Windows phone makers. Samsung and Huawei recorded an increase of 0.06%, and BLU with 0.02% - but as AdDuplex notes, these changes are statistically insignificant. 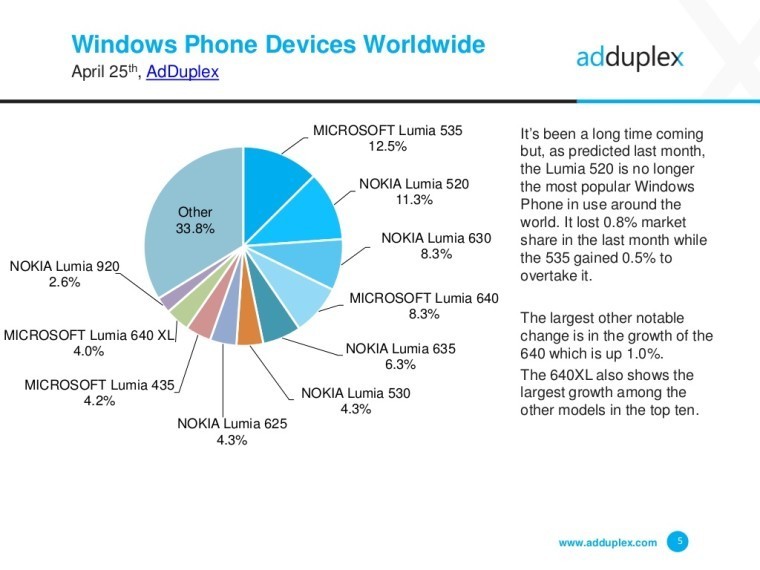 When it comes to the share of Windows phones worldwide, it seems that there is now a new holder for the title of most popular Windows phone. The Lumia 535 has finally dethroned the Lumia 520, which sat in the top spot for an incredible amount of time. The 535 recorded 12.5% share, an increase of 0.5%, while the 3-year old Lumia 520 saw a 0.8% decrease, now only garnering 11.3% of the pie. 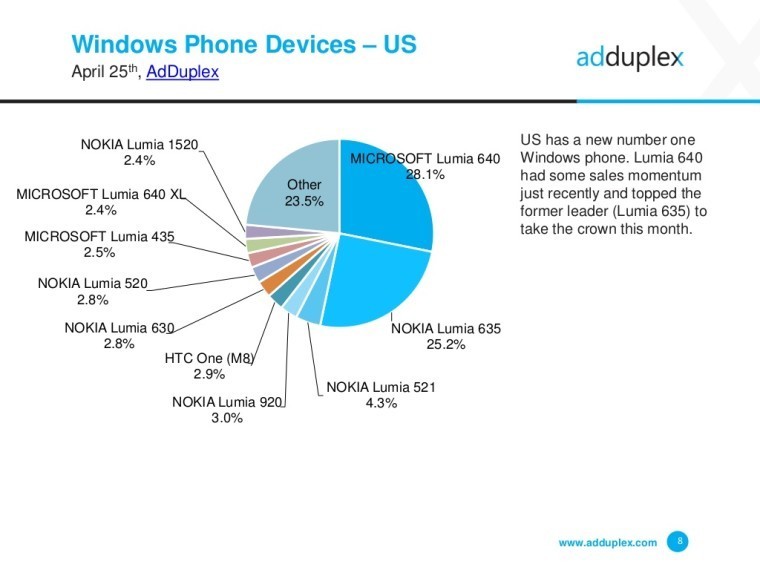 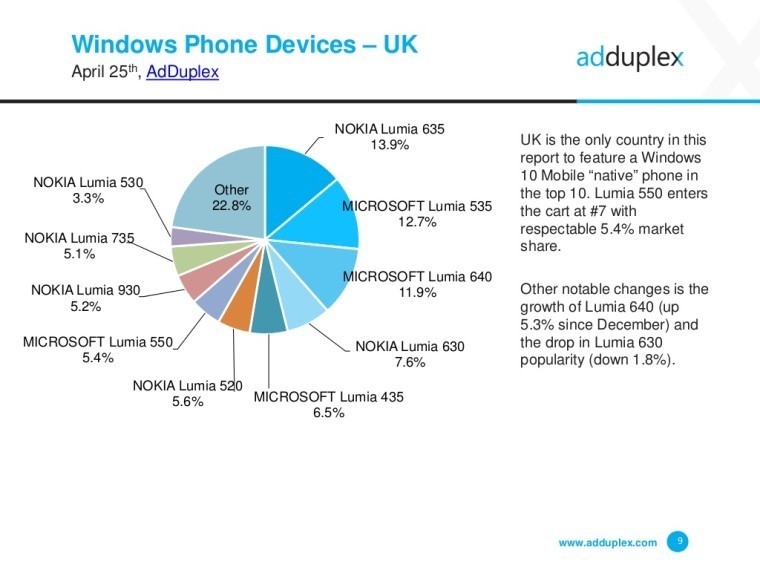 Heading over to the United Kingdom, a Windows 10 Mobile device has entered the top-ten for the first time. The Lumia 550, which was announced along with the Lumia 950 and 950 XL, is now in the seventh-place spot, holding a 5.4% share of the Windows phone platform. The Lumia 640 has seen a steady increase of 5.3% since the month of December, while the Lumia 630 has dropped by 1.8%. 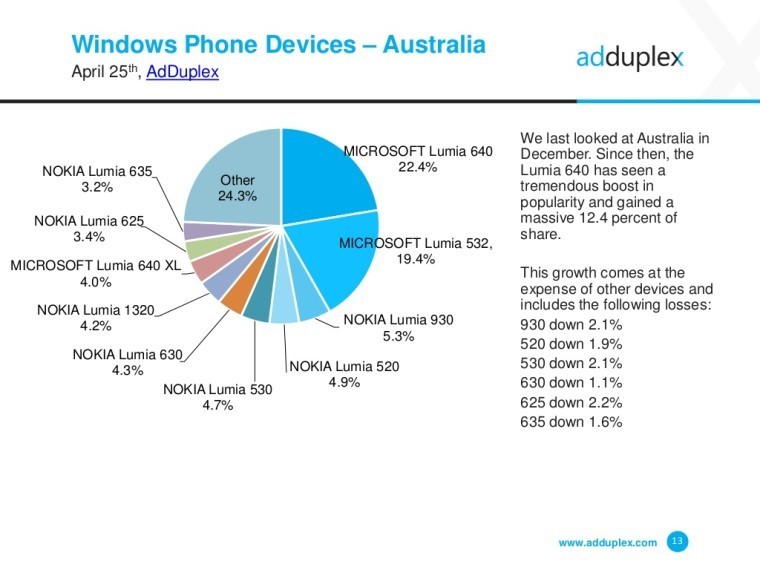 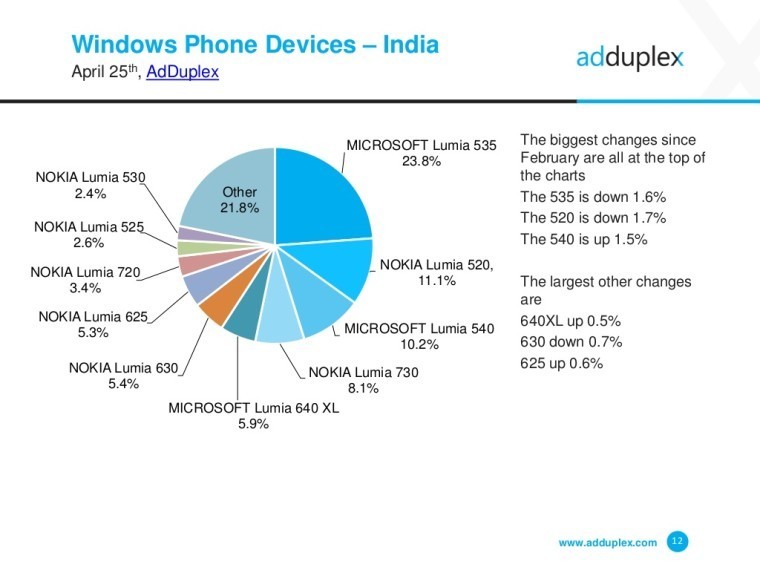 You can check out a more detailed overview of this month's AdDuplex report here, which includes statistics in other countries. AdDuplex will publish its full monthly report tomorrow on its website.