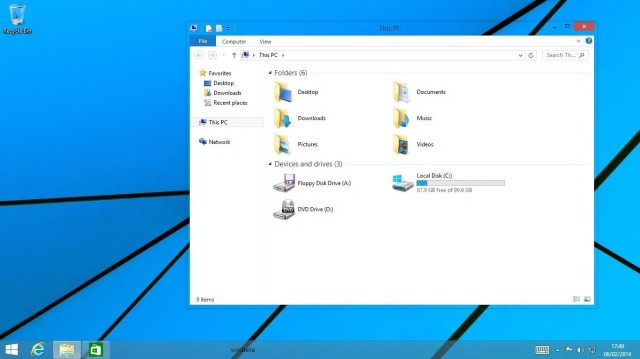 Aero Glass is a theme that many loved and it broke many hearts when the theme was not included with Windows 8. With it’s tasteful transparency and the ability to tweak the tints of the glass, many hoped that the theme would return with Windows 8.1. Alas, Microsoft decided to can the theme and moved to the flatter pastures with the introduction of the modern design language.

But, if you like to live on the bleeding (and leaked) edge of Windows and want to relive the glory days of Aero, you can do so in the Windows 8.1 update 1 that has leaked. With a simple registry tweak you can bring back Aero Glass but we should note that the theme is extremely buggy and not for those who are doing anything other than simply playing with the theme.

The tweak involves changing the values inside of your registry which we might add should only be done by folks who know what they are doing as a bad registry change can kill your system. But, if you are brave enough, do the following: locate KEY_LOCAL_MACHINE\SOFTWARE\Microsoft\Windows and then click on 'Windows' and select New > Key and name it DWM. From there, create a Dword 32bit values and name it HideBlur, then change the value to 1.

While we are cautiously optimistic that Microsoft will bring back one of the best themes the company has created, seeing as this can only be done in a leaked build of Windows 8.1, we wouldn’t get too excited as these things are quite common. In fact, since it is a leaked build, everything is subject to change and the ability to enable Aero Glass could be an oversight by those who compiled the build.

Windows 8.1 Update 1 is expected to arrive in April and could be formally announced at BUILD that takes place the first week of that month. Seeing as Microsoft has kept quiet on this update, any features that do leak could be changed (or not make it at all) before the final version is released.

Via Winbeta and @bav0