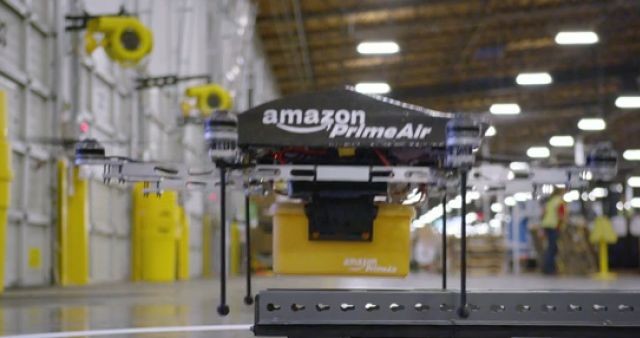 Amazon CEO Jeff Bezos gave a rare TV interview to Charlie Rose today as part of a profile of the company on CBS News' 60 Minutes. During the segment, Bezos revealed a previously secret R&D project that could revolutionize how its packages are delivered to customers.

The project is called Amazon Prime Air, and the 60 Minutes segment shows how it would work. Basically, remote octocopter drones pick up packages of up to five pounds at one of Amazon's many fulfillment centers. Each drone can fly up to 10 miles away from the center and deliver a package to a customer, navigating via an on-board GPS.

Bezos says even the small weight limit on the Amazon Prime Air drones will be able to handle the majority of packages that the company ships. The drones are powered by electricity so that cuts down on gas costs and even if one of the eight blades fails in flight, the drone can still make it to its destination. The idea is that if you happen to live near an Amazon warehouse, you could in theory order something and have the product delivered to you via the Amazon Prime Air drone in just 30 minutes.

So how long will we have to wait until this sci-fi delivery system out of "The Jetsons" become available? Bezos admits in the interview that Amazon Prime Air is still years away from getting approval from the Federal Aviation Administration but he claims that, optimistically, we could see these drones flying around and delivering all sorts of things in four or five years.

The 60 Minutes segment also briefly looked into Amazon's secret gadget labs in California, where the company is working on future products. Rose asked Bezos if Amazon is working on a set-top box for streaming video content, as has been highly rumored, but Bezos would not comment, saying only "Stay tuned."