Nearly a year ago, AMD announced it would start making and selling processors using designs from ARM, in addition to its traditional x86 chips. Today, the company announced its future processor plans that would allow ARM and x86 chips to use the same motherboard. 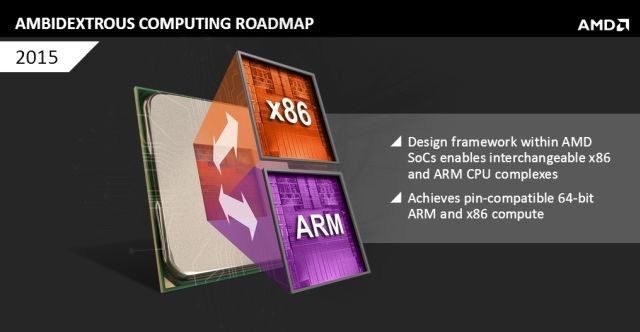 Today's press announcement reveals "Project Skybridge", which is part of AMD's efforts to introduce what is called "ambidextrous computing." The effort will begin in 2015 which will allow a family of x86 and ARM-based 20nm APUs and SoCs (System on a Chip) products to be pin-compatible on one motherboard design. AMD says:

In theory, the "Project SkyBridge" chip family could allow an ARM chip on a motherboard to be swapped out with an an x86 processor and vice-versa. That means that a tablet with such a setup could support running either Windows or Android with ease. It could also be used in server hardware.

AMD also announced plans to launch K12, a new 64-bit ARM-based processor design that would combine high performance with low power use. The first chips with the K12 design will be released in 2016.