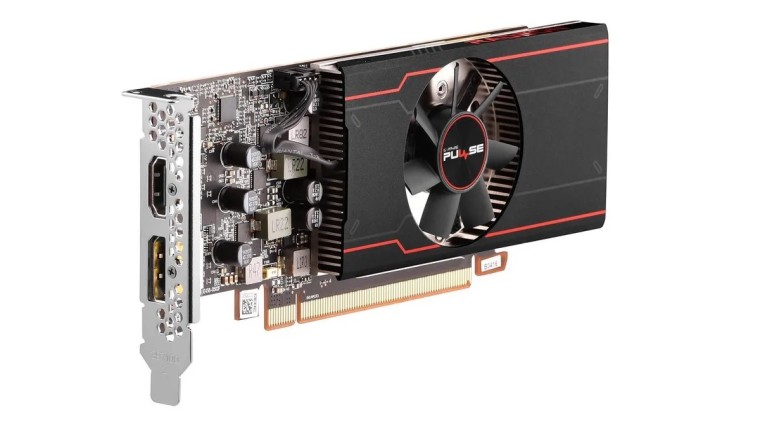 AMD has quietly launched a new graphics card. The AMD RX 6400 has a GPU that’s weaker than the $199 AMD Radeon RX 6500 XT. Despite its limited performance, the new AMD graphics card could benefit those who are designing an ultra-compact mini-PC for multimedia streaming, light gaming, and office work.

AMD’s partners, including ASRock, Biostar, Gigabyte, MSI, PowerColor, Sapphire, and XFX now have a graphics card with the AMD RX 6400 GPU. The majority of the cards launched with a list price of $159.99, and, most of them are actually selling at a retail price that matches the MSRP.

The AMD RX 6400 is rated at just 53W of power. In other words, this graphics card will not need an additional power input, and it will run reliably on the power that the PCI-Express slot supplies. An average PCIe slot can reliably supply up to 75W of power.

In terms of performance, the AMD RX 6400 does pack an RDNA 2 GPU. However, it offers only 12 compute units. As mentioned above, it is slower than the $199.99 AMD Radeon RX 6500 XT in all aspects. The RX 6400 packs 4GB GDDR6 VRAM clocked at 16 Gbps, and only 128 GB per second of bandwidth. All the variants of the graphics cards from AMD’s partners feature just two display outputs. The card does offer HDMI 4K support, and most of the variants have an HDMI 2.1 out as well as 1.4a DisplayPort. The AMD RX 6400 does benefit from 16 MB AMD Infinity Cache but lacks H265/HEVC as well as AV1 decoding abilities.

Perhaps the biggest appeal of the AMD RX 6400, besides the fact that it does not need an extra power connector, is that it can easily fit inside an SFF (Small Form Factor) PC. Most of the RX 6400 models take up a single slot and they ship with a low-profile PCIe bracket (except the one from Gigabyte). This means the AMD RX 6400 can easily fit inside a PC meant for multimedia consumption and light computing. Incidentally, the majority of AMD’s partners who are offering the RX 6400 variants, seem to be including both the standard as well as the low-profile PCIe brackets.