Information is a powerful tool and according to the Twitter feed #Jan25, that tool has been shut down in Egypt amidst major protests over the past few days. Social media sites have been used in Egypt (and in Tunisia last week) to coordinate the protestors so the thought is that without a central spot to gather information, the protests may die down. When that didn't work, the country decided to block all traffic in and out of their borders in an effort to stop the protests.

Initially the country simply shutdown access to sites like Twitter and Facebook, places where protestors were gathering to coordinate their activities. Unfortunately for the Egyptian government, people are generally tech savvy nowadays and have found workarounds to the blockade. One such workaround was using Blackberry for web access, but that too had allegedly been disabled today according to the LA Times. Although this may have helped slow down access to some of the data, the use of proxies, VPNs and the like can generally be used to get around such restrictions.

In response to the government’s shutdown of sites like Twitter and Facebook, the BBC is reporting that hacktivist group Anonymous had launched a denial of service attack against the Egyptian interior ministry’s web page. The group, infamous for their DDoS attacks against companies they perceived as being anti-Wikileaks, has been providing information on bypassing the various social network blocks. The Egyptian government one-upped the attackers by shutting down the country's internet. This must have been one of the things the United States government had in mind when they introduced legislation that would give the president similar power.

Now that the country is dark it will be very difficult to know what is happening within its borders. It is unknown how long this blackout will last and what the ramifications will be.

Update: An anonymous source within Egypt has sent an open letter to Reddit, requesting support from the group. They are suggesting a boycott of global corporations such as Vodafone. 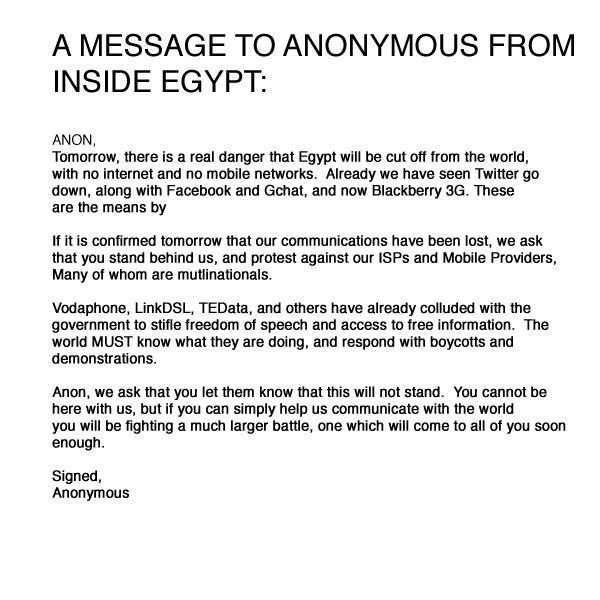