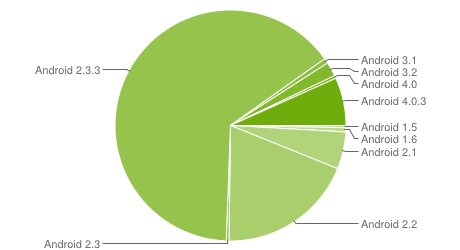 Android 4.0 was launched in December with its introduction inside the Galaxy Nexus smartphone from Samsung. Since then a number of other older smartphones and tablets have received the upgrade to "Ice Cream Sandwich". However, according to Google's own numbers, Android 4.0 still hasn't made much of an inroad six months after its launch.

According to information on the Android Developers page, Android 4.0 is installed in just 7.1 percent of all Android devices that have the Google Play download store installed. That compares to a whopping 70 percent of smartphones and tablets that have some version of Android 2.3 (also known as Gingerbread) inside. Even the older Android 2.2 (Froyo) still holds on to a 19.1 percent market share of all Android devices.

To be fair, Android 4.0 is doing better than the tablet-only Android 3.0, which is only installed in 2.7 percent of all Android devices. Also, Android 4.0's percentage has doubled since April as more and more older devices get upgrades. But with Google rumored to be working on Android 5.0 for a possible launch later this year, we do have to wonder if Android 4.0 will ever gain the traction in smartphones that Android 2.3 was able to do.