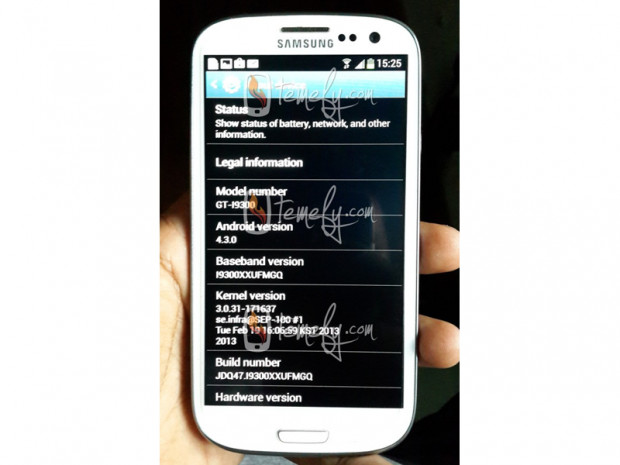 The screenshot above shows Android 4.3.0, and according to the KnowYourMobile website, the source of the leak says there is also another group of testers working on the update for the Samsung Galaxy Note 2 as well. The build number is shown as JDQ47.I9300XXUFMGQ which is also Samsung Galaxy S3 specific.

It's not the first time we've seen 4.3 shown off, back in May a Nexus 4 was shown to be running it at a tech conference in Asia. Android 4.3 will most likely bring some features of the Samsung Galaxy S4 and HTC One Google Edition to all Android devices, including a new camera UI, updated fonts, Bluetooth 4 low-energy support, improved graphics capabilities and new notifications.

Android 4.3 Jelly Bean is expected to be launched in two days time on July 24th at a Google press event where the new Nexus 7 is also likely to be launched by Sundar Pichai, the recently appointed head of Android and Chrome.

Other rumors claim that although the S3 is still waiting for the update to 4.2.2, it's likely that it will be skipped in favor of 4.3 instead, but as usual this has yet to be confirmed.

Update: As pointed out in the comments, the Kernel build can only mean it's running 4.2.x version of Android. A much better explanation can be found in this comment thread.