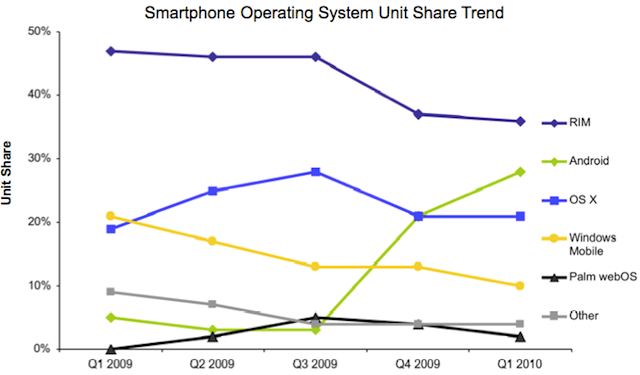 Sourcing the latest sales figures from the first quarter of 2010, Android OS powered phones are now in second place (28%) behind RIM’s Blackberry OS which holds a strong 36% share. Apple’s iPhone OS stands in third place with a 21% market share.

“As in the past, carrier distribution and promotion have played a crucial role in determining smartphone market share,” said Ross Rubin, executive director of industry analysis for NPD. “In order to compete with the iPhone, Verizon Wireless has expanded its buy-one-get-one offer beyond RIM devices to now include all of their smartphones.”

The market research company found that strong sales of the Motorola Droid, HTC Droid Eris, and Blackberry Curve helped Verizon to keep up with AT&T’s own strong smartphone sales. AT&T held the title of the number one smartphone carrier with almost a third of the market at 32%, while Verizon followed closely at 30%, and T-Mobile and Sprint lagged behind at 17 and 15 percent respectively.