From figures released earlier today, it has been revealed that from May 2010 to May 2011, Google's Android platform saw an uptake of 634% in the United Kingdom alone. The exponential growth that's been observed over the past 12 months has put the Android platform only 0.4% short of being level with Apple's 27.1% dominance in market share. 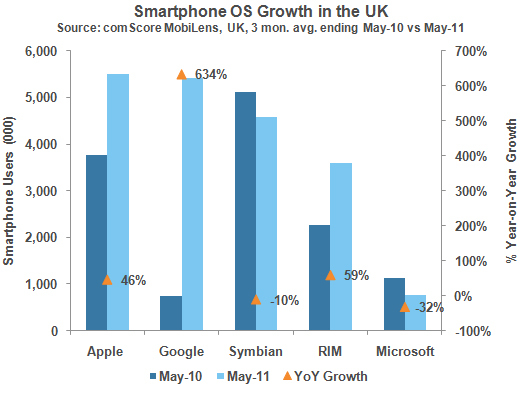 According to the statistics report from comSore Data Mine, the UK has become a smartphone battle ground with 42% of consumers now using smartphones as opposed to the 27% that was existent only a year ago. The 4.7 million new users that Google has gained over the past year has been a big part of the overall figure, but not necessarily the only contributing factor. Apple saw a reasonable 46% growth from 2010-2011 with RIM's BlackBerry doing even better, seeing an uptake growth of 59%. The statistics are bad news for Microsoft though, which observed a reduction of 32% in the amount of new users taking up Windows Mobile/Phone.

Google has certainly had a successful year in promoting their smartphone operating system which has overtaken the original monopoly that Apple held with the general consumer smartphone market. Predictions from industry analysts for the next two years have continued to put the Android OS as the strongest contender with 40% dominance, in an industry that will only become more competitive as time moves forward, we can expect an increase of advertisements to earn our cold hard cash.

Image Source: comScore Data Mine
Thanks to Boz for the news tip!