Anonymous has been quiet for the last few weeks, but today, in response to the US Governments' sudden and unexpected move to take down MegaUpload, the group launched a denial of service attack on the Department of Justice website, rendering it unusable for the last hour.

To many, it appeared that the website had crumpled under the amount of users accessing the site after the news of the MegaUpload arrests and takedown, but it appears there may be more to the story.

According to The Next Web, while the "official" Anonymous Twitter account hasn't taken the blame for the attack, the Swedish branch has. Chatter is all over the #OpPayBack hashtag about the "success" of the attack and that the group took down the Department of Justice in just 15 minutes of the news breaking.

Does this mean Anonymous is back? If so, it could be in a big way. This is the first time the group has made a direct attack (and admitted it) on a US Government site, meaning the FBI is likely to respond swiftly.

Update: The Universal Music group, as well as the RIAA websites are currently offline too (or, very intermittently available), the group is yet to publicly comment but this appears to also be the work of Anonymous. See below update.

Update 2: The MPAA website is also offline. Tweets are claiming Whitehouse.gov is the next target.

Update 3: Anonymous just confirmed their involvement in the attack on RIAA/MPAA/Universal.

Update 4: We've heard that the FBI website may have been hacked. More soon...

Update 5: Copyright.gov is offline now, too.

Update 6: FBI.gov is the next target, according to this tweet.

Update 7: This is getting personal. MPAA chief Chris Dodd's personal website is now under attack.

Update 8: Anonymous just dumped the database of the Utah Chiefs of Police association website with personal details and logins. We won't link this for obvious reasons. USDOJ.gov is down, too.

Update 9: Twitter has manually removed the #opmegaupload and #oppayback hashtags from trends and appears to be actively ripping out anything related.

Update 11: We're trying to confirm if Twitter actually does actively pull trends, it's common for the website to demote trends when they become "noise" (an example is Justin Bieber). Despite this, it's only been two hours so this should not have happened.

Update 12: DDOS and #DepartmentOfJustice just disappeared from US trends

Update 13: Anonymous is really hunkering down on Whitehouse.gov. It's not down yet, but they're not stopping tweeting about it.

Update 15: #Megaupload is now at the top of Twitter trends, around 1800 tweets a second.

Update 17: The Department of Justice finally caught on, tweeting that they're experiencing "high load." No kidding.

Update 19: Proof of Mega group paying for content is coming out in the form of email leaks:

On or about February 5, 2007, VAN DER KOLK sent an e-mail to ORTMANN entitled “reward payments”. Attached to the e-mail was a text file listing the following proposed reward amounts, the Megaupload.com username, and the content they uploaded:

Update 20: That didn't last long, FBI.gov is back online.

Update 21: We can't believe this, but it looks like Megaupload is trying to get back online with a new URL. Not quite - the URL that is floating around "megavideo.bz" is a scam site and will infect your computer. We advise against visiting this site. 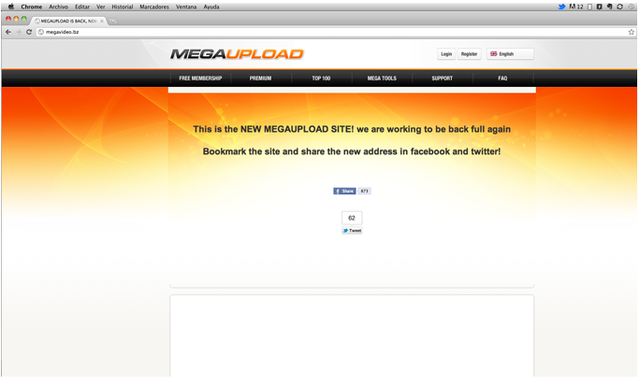 Update 22: Things seem to have quieted down for now. Please tip us if you hear anything else!

Update 23: Venturebeat got a list of seized items from the founder of Megaupload: