A vast majority of my streaming is done from Google Play Music, but often, there's content on platforms like YouTube and SoundCloud that one generally can't find elsewhere.

This led me to New Zealand-based developer Dominic Maas' UWP project, SoundByte, that was initially made to be a SoundCloud client for Windows Phone. It eventually expanded to Windows 10 on the desktop, and currently supports streaming from SoundCloud, a similar service called Fanburst, and YouTube. The developer intends to expand the number of services you can stream from in future (more on that later)﻿, but for now, I'll stick to sharing my thoughts about the app in its present state. 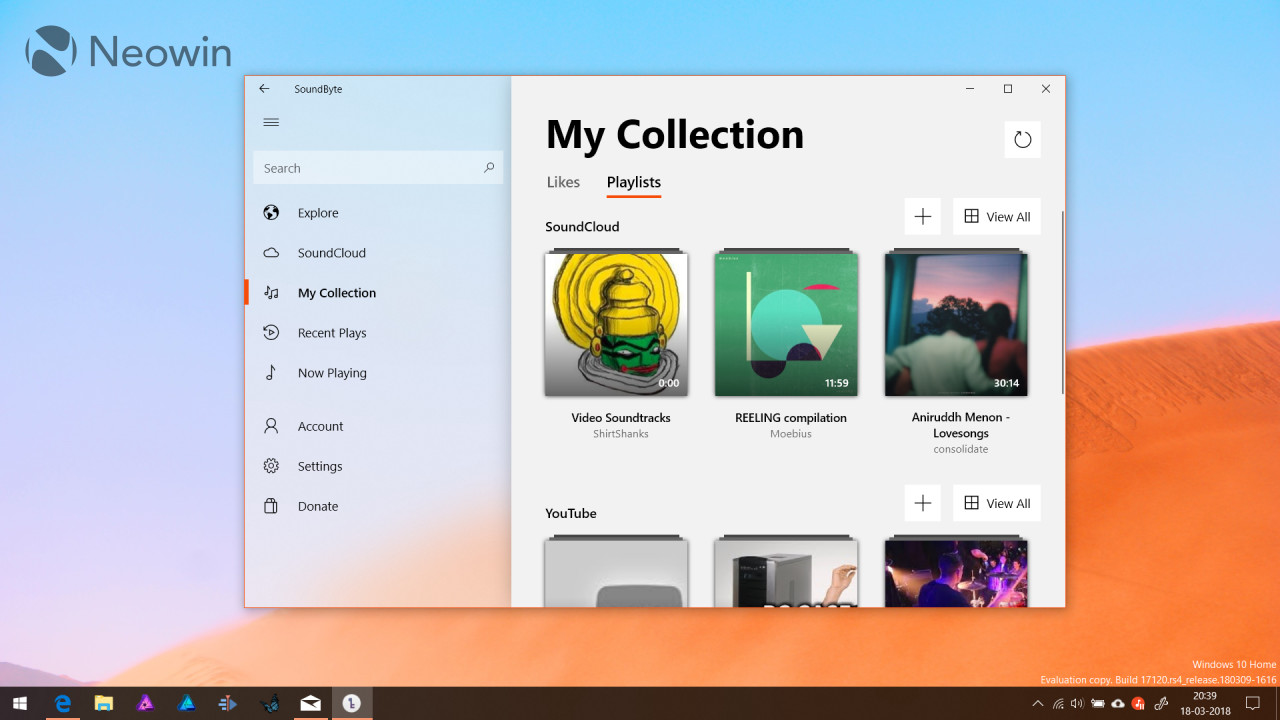 My first impression of the app is that it's gorgeous. It's possibly my favorite implementation of Microsoft's Fluent Design standard, with properly varying font weights and sizes, and judicious use of translucent panes. Dennis Bednarz, a reputed developer of apps for jailbroken iOS devices, was involved in designing the interface.

That being said, the large carousel at the top of the home page feels a bit overqualified to just show a link to the latest changelog and an option to resume playback. Additionally, the default home page, or the Explore tab, as it's called, shows trending tracks on SoundCloud, Fanburst, and YouTube. An option to change this to my curated SoundCloud feed would be quite useful. 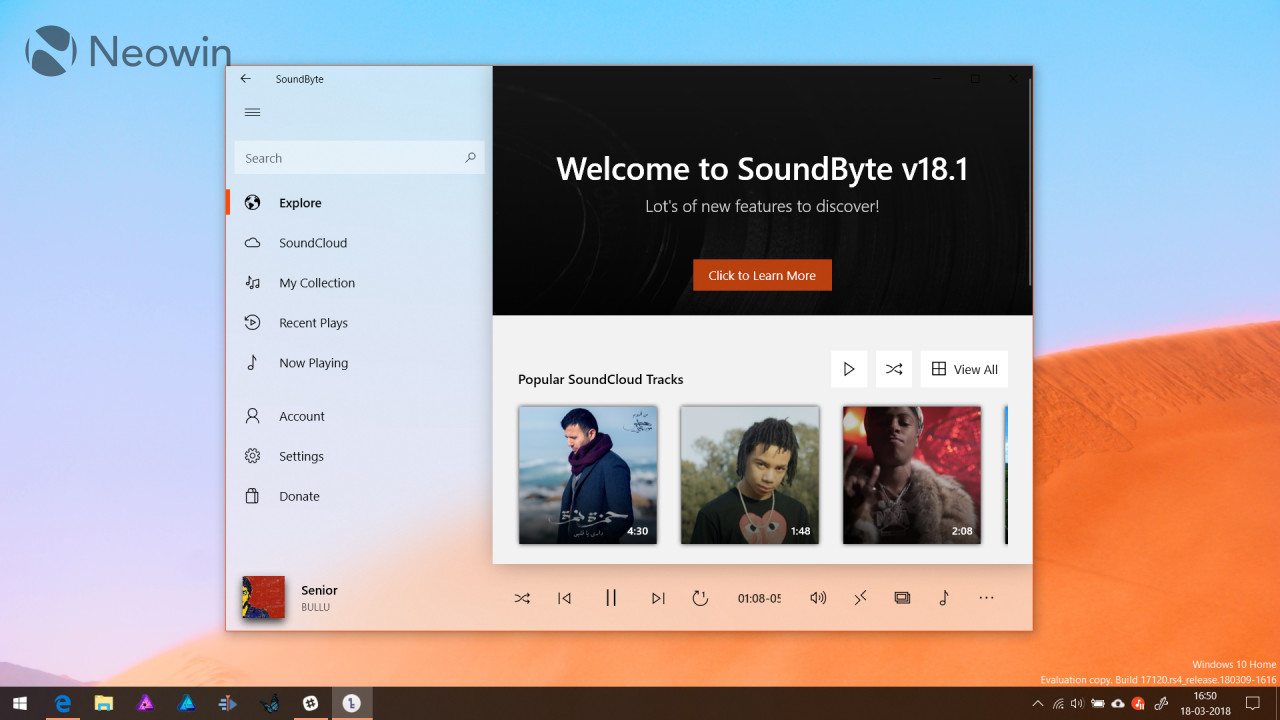 Leaving aside the search bar at the top, there's a column of tabs along the side. The aforementioned 'Explore' tab for trending tracks across the three currently integrated platforms, a tab for your SoundCloud feed, one for tracks you've played recently, a 'My Collection' tab for custom playlists and tracks you might have 'liked' on each platform, and a 'Now Playing' tab.

There are three secondary tabs below those as well - one for handling connected accounts, one for settings and a final one for the only monetization path Maas has chosen for now, optional donations.

There's not much to explain about each tab's function beyond its name; the album art and track titles within each are all arranged tastefully with slight drop shadows and careful attention to padding that add to a pleasant overall aesthetic. 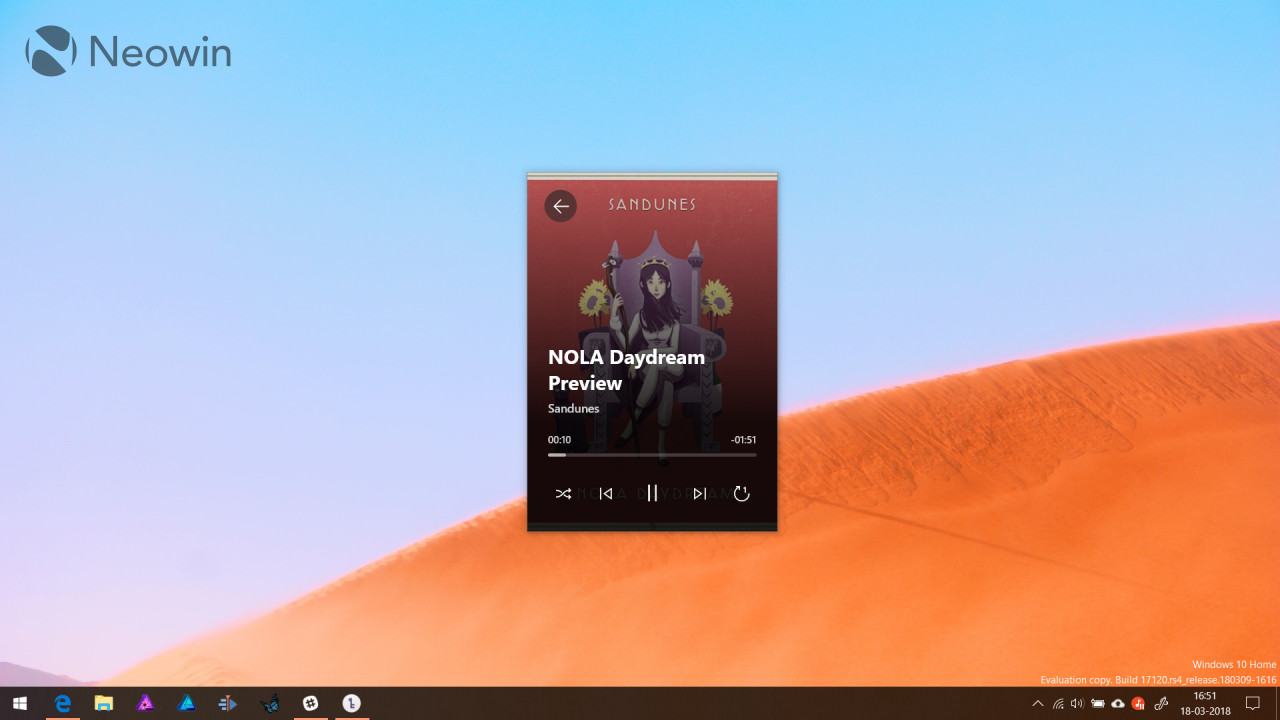 There's a nice mini-player mode that lets you keep a small album-art sized window with basic information and controls floating above all your other windows at all times, which is handy. There's also an option for you to sync your playlists and preferences with a SoundByte account without needing a separate SoundCloud/Fanburst/YouTube login. For now, that's all there is to having a SoundByte account, though there are plans for extending this functionality in future.

Here's an oddity - there are currently three separate ways to access the 'Now Playing' window - from the column of tabs, from the artwork of the currently playing track at the bottom, and via a dedicated button along the same row of controls at the bottom - which brings me to the last problem I have - in contrast to its stark simplicity everywhere else, the bar at the bottom has way too many buttons - nine, not including the drop down menu with additional options.

Granted, they're all important functions and shortcuts, but putting them all in one row does make it hard to decipher them at a moment's glance.

Lastly, I wish it had a tab for locally stored music, too. I realize that playing local content is not what this app is designed for, but making SoundByte a one-stop-shop for all of my audio consumption needs would make for an excellent experience, personally speaking. 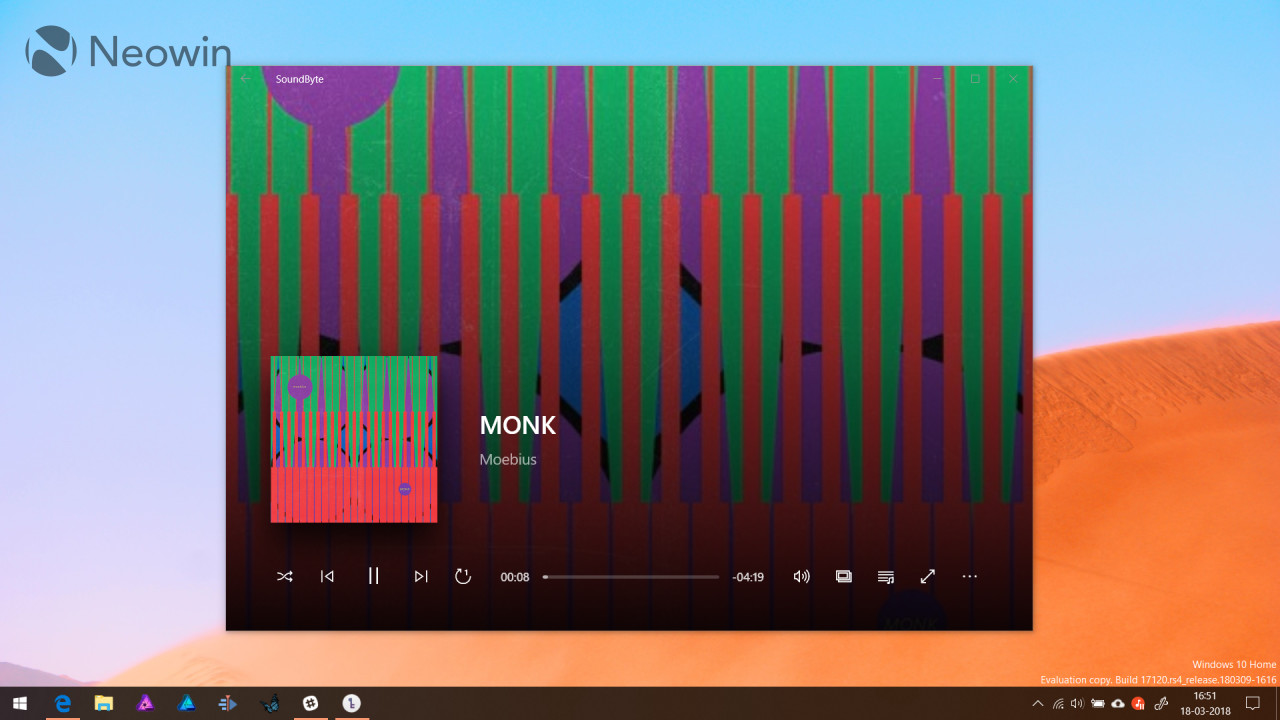 To summarize, I love SoundByte - the problems I have with it are by no means glaring flaws, so much as minor usability shortcomings, and are easily forgivable. It offers features that its first party alternatives don't, looks fantastic,﻿ and is updated regularly.

SoundByte is certainly worth a shot for anyone looking for a streaming app that nails the basics without making any significant compromises along the way.

As for what lies beyond, I've had the pleasure of speaking with SoundByte's developer, Dominic Maas, to discuss just that; our conversation touched on his vision for the app and his opinion on Microsoft's Universal Windows Platform (UWP)﻿ for first-time developers, among other topics.

What led you to the decision to write an app like SoundByte on this specific platform?

I was originally looking for a good SoundCloud client (this was before the official SoundCloud client and apps like AudioCloud came along) on the Microsoft ﻿Store and could not find anything. I had heard of UWP and thought I'll give it a try. The app was originally built for Windows Phone and then ported to desktop shortly afterwards (before release).

The ability for UWP apps to run on multiple platforms seemed really cool to me, so that was a big push.

Was this your first experience with UWP as a developer?

Yep. And my first real project. I had dabbled around with HTML/CSS, C++, Java and a little bit of C# before but never proper C# and XAML. So it was quite an experience having to learn C# and XAML alongside the UWP framework.

Right, so how long did that take you? What kind of setbacks did you hit along the way that made the process lengthier than it had to be?

I originally started developing the mobile portion of app near the end of 2015, November, I think, after school exams. By February, I had a usable mobile and desktop app, relying on r/WindowsPhone subreddit for feedback. Development continued at a steady rate, and I had some beta testers helping me. Although - as you could imagine - building your first app as a music client was probably not the best idea. I had critical bugs that would take two weeks to fix, and general lack of inspiration as the months drew on. But I eventually got there, releasing the app in July. So it took a while, quite a learning curve.

At the start of 2017 I released v2 which introduced the navigation menu along with a complete redesign (inspired by 'Neon' as it was called back then) and released the app on Xbox. The Xbox release was painful (lots of background crashes) but that was mostly fixed in a month (although some minor issues still exist to this day). Around the middle of 2017, after the official SoundCloud app released, I decided to work on making SoundByte a multi-service client, originally supporting Fanburst, and then YouTube. At this same time I decided to make SoundByte cross platform as well. It took the rest of the year and rewriting almost everything, but I now have a core library that supports multiple services and can run on pretty much every major platform. I just have to make the client apps now!

It's impressive what you've done by yourself in just a little over two years. So were there ever any annoyances you came across inherent to the platform you were coding on?

Thanks! No not really. Since it's a music app there were no issues that caused me to think about using, say, Win32. The only major issue I had with other apps was SQL database support, which was added in the Fall Creators Update.

Gotcha. So how has response from your users shaped your vision for a 'SoundByte ecosystem', so to speak?

User response has been very helpful. I originally asked on Twitter a while ago about what to do with SoundByte. Majority voted on making it a multi-service app, which has now been done. I've also gotten a lot of requests for an Android app, so that's up next. But in general, feedback has been awesome, helping me add useful things to the app that I would had never thought of.

I see. On the subject of an Android app, I did see references to one in your GitHub page. What's on your mind in terms of functionality for it, regarding things like integrating it with the existing Windows app? The prospect of it sounds rather challenging, because to my knowledge, third-party integration for existing services hasn't been done before.

I'm planning on heavily integrating it with the remote system available on Windows. So the plan, is you could be listening to a song on your PC and then 'push' that song to your phone and continue playing it there. The app will work without a PC, but the experience will be greatly enhanced with one. Hopefully, it shouldn't take too long as most of the code is cross-platform. But development is progressing well.

SoundByte just reached its v3.0 milestone, so to speak, last week. I recall speaking with you some months ago about your interest in wanting to make SoundByte more of a modular solution for streaming platforms in general, and integrating services like Google Play Music (GPM) to it by means of a plugin-based system. Any comments on that?

Versioning is a little all over the place! Around July last year I moved to a {year}.{version}.{build} system, so we're actually on v18.1, currently. As for what's next, I'm planning on integrating more SoundByte account features, such as creating playlists to which you can add songs from more than one streaming service, which I think would be really helpful; podcast support is also planned. Making the app more modular is definitely something I want to do. I'll probably experiment with this new system using Google Play Music. The plan is to use some sort of an add-on system. If you want GPM support, just enable the add-on and login to your account. Almost like a Kodi approach, but towards music instead. This is all far away though, lots of planning still to do.

When you say that - and I'm gonna derail a little bit here - to me, it feels like you're among the first of what I think might be the next generation of music app devs. Given all the rumors of Apple killing off purchases in iTunes in favor of streaming through Apple Music, and just the massive general shift to streaming throughout the world, I think more devs that currently make third party apps for locally stored music might see growing public interest in apps that club together the existing plethora of streaming platforms instead, much like what we've discussed regarding your vision for SoundByte. As a dev yourself, do you see any validity to this assumption?

Hmm, that raises an interesting point. I do think music streaming will greatly overtake local music playback - in fact, I'm sure it already does now - especially with data plans becoming cheaper. That said, I still think local playback is very important, along with purchasing music to an extent. We saw this last year when some artists removed their music from Spotify. As far as I know (although I may be wrong), you could no longer listen to their songs. I do see the future landscape going to primarily streaming as it's got more value for the end user, but maybe with apps that curate multiple services you can avoid issues of songs being exclusive to one platform.

And then you have bands like Tool, whose music you can't find legally anywhere on the internet. I see your point. And I think that's it! I really appreciate the detailed answers you gave me, thanks so much for taking the time to do this.

SoundByte is available on all Windows 10 devices, including the Xbox One, through the Microsoft Store, for free. If you wish, you can support its development by donating through the app, or by following a link inside it to Maas' Patreon page.