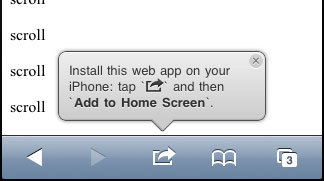 Developers have accused Apple of pushing them to use the App Store by making web apps appear slower on iOS devices.

Citing ''various tests'', The Register claimed that web apps ran between two and two-and-a-half times slower when launched from the home screen into ''full-screen mode'' as compared to browsing to the app in Safari.

Developer say that's because web apps are not using the Nitro JavaScript engine added to Safari in iOS 4.3. Apple has claimed Nitro runs JavaScript up to twice as fast as in iOS 4.2.

Web apps run from the home screen are apparently also unable to tap into caching systems that allow them run in offline mode as well as more advanced rendering modes. Quoting an ''unnamed developer'', the Register claimed that Apple's Mobile Safari team is well aware of the issue, but has indicated nothing will be done about it. The site did admit that ''Apple isn't degrading the speed of home screen web apps. It's boosting the speed of web apps in the browser'' but said there is essentially no difference between the two for the end user.

Various tech blogs have suggested speed restrictions on full-screen web apps could be a deliberate ploy on Apple's part to force developers inside the walled garden of the App Store. Web apps, they argue, are almost entirely outside Apple's control and do not need to go through the usual app approval processes.

With Apple remaining silent on the issue, there's no way to know the truth, but mobile programming author Maximiliano Firtman, who carried out The Register's tests, said he doesn't believe Apple is deliberately crippling web apps.

''I don’t believe this is a deliberate attempt from Apple. I can’t be 100% sure because I don’t work at Apple, but I’m not seeing any excuse to do that. I believe it’s more a “missing feature”, a security problem, an App Store Rules problem, or maybe a bug,'' he wrote on his blog.