Here’s a story that will divide opinion! Apple has banned the latest instalment of the acclaimed SAGA series comics from sale, via any iOS apps, due to the issues inclusion of two gay sex images. 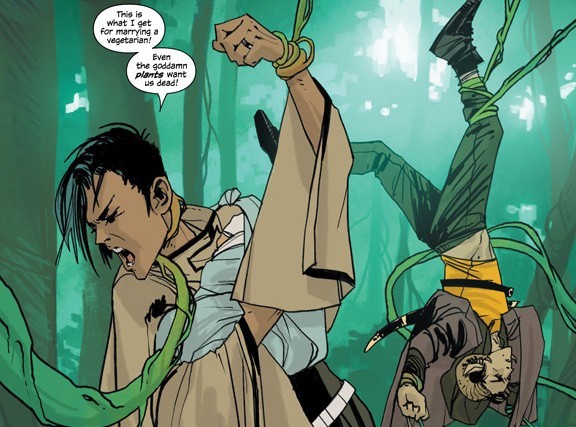 The visual style of the SAGA series

One of SAGA’s writers, Brian K Vaughan, commented on the ban:

Unfortunately, because of two postage stamp-sized images of gay sex, Apple is banning tomorrow’s SAGA #12 from being sold through any iOS apps.

Apple have always made it clear that sexual graphic imagery of any kind is strictly monitored and this, no matter the size of the images, is no different. Vaughan went on to say:

… our book has featured what I would consider much more graphic imagery in the past, but there you go. Fiona and I could always edit the images in question, but everything we put into the book is there to advance our story, not (just) to shock or titillate, so we’re not changing s**t.

And this isn’t the first time Apple has cracked down on sexual themed apps and content. In 2010, Apple began a crackdown of content that could be deemed sexual, to the point of degrading or objectionable.

On a more positive note, SAGA #12 will be available in stores and online through sites like Image Comics or Comixology. Although there is a chance that Apple will allow #12 to be sold through the iBookstore as adult related material can sometime show up there and be sold through iOS apps.

So, do any of you read SAGA and aren’t at all phased by the imagery included, or do you think that Apple is right to stop imagery of this kind being available to it’s customers?

[UPDATE] It has come to our attention that Comixology CEO, David Steinberger, has issued a brief statement via the Comixology Blog in which he details that SAGA #12 will soon be available through their "App Store app soon." He also stated that "Apple did not reject Saga #12." Thanks to forum member Stetson for passing this information on to us.