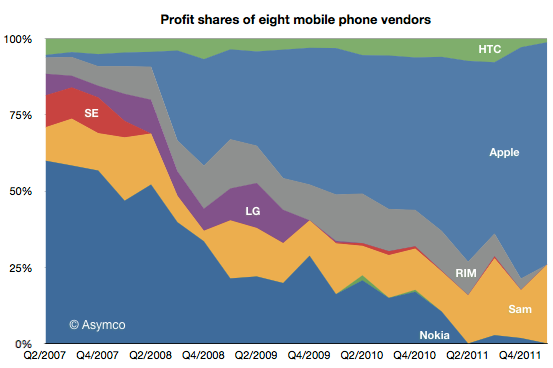 The smartphone industry is exploding, with more and more people buying these powerful devices every day. But is everyone in the industry benefiting from this smartphone boom? Not really, according to a new report from the research firm Asymco.

According to their findings, two companies had swallowed up nearly all of the operating profits for the smartphone industry. Apple is the leader with its iPhone division taking 73 percent of the industry's profits while Samsung is a distant, but still solid, second with 26 percent. That means Apple and Samsung have between them grabbed a whopping 99 percent of all operating profits in the smartphone industry.

HTC came in third place with just one percent of the industry's profits. Other companies such as Motorola and RIM have all reported losses while LG has managed to break even.

So what happened? Asymco says that most of the praise, or blame in some cases, is on Apple. The report says:

Seen this way, the story isn’t so much that Apple “took the profits from the incumbents”. Rather, it’s that Apple created a vast new pool of profits. And one need not look far to find out where they came from: operators. These profits were mostly carrier premiums for the iPhone 4S.

Wireless carriers are willing to pay a premium price to Apple because, according to the report, the iPhone 4S gives them " ... a competitive advantage or preserves their customer base from churning." It doesn't look like Apple will be giving up its huge profits anytime soon.