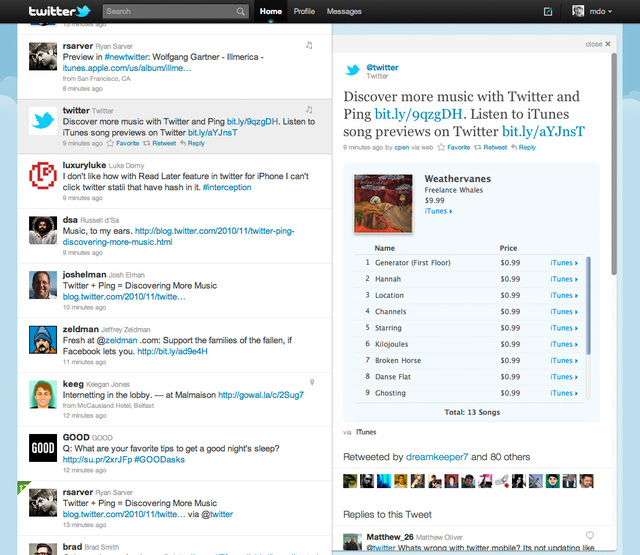 Despite your personal feelings for Twitter, it has completely taken over the way millions of people communicate. The short SMS like messages have become a quick way to communicate and being searchable, provides a deep archive of events that are happening around the world.

Ping, which Apple introduced to be a social media experience for music, has seen some success primarily because it's tied to Apple's popular iTunes service. To help propel Ping, and provide new services to Twitter, Apple and Twitter have teamed up to help integrate Ping into Twitter.

According to the Twitter blog, "starting today Ping, iTunes' new social network for music, and Twitter are making it even easier for people to share music discoveries with their friends by putting Ping activity, song previews and links to purchase and download music from the iTunes Store right in their Tweets on Twitter.com".

By tieing these two services together, it's now easier to see what types of music your followers like and are currently purchasing. The service is completely optional and if you do tweet your music selection, your followers will be able to listen to a preview of the song just like they would in iTunes.

The pairing of Ping and Twitter is a natural fit for both services, but it feels like Twitter may be the big winner compared to Ping. Despite the potential to completely dwarf Ping, Apple will be able to spread its iTunes service to a far greater audience.