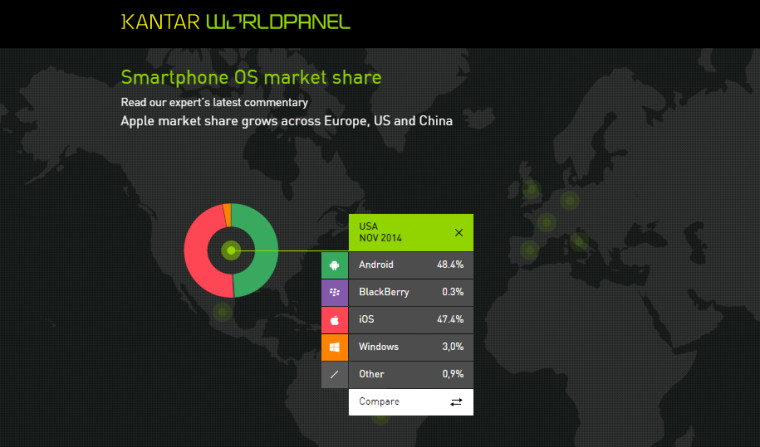 Kantar Worldpanel ComTech has released quarterly data for smartphone market share, and it is again bad news for Windows Phone fans, as the mobile operating system continues its decline in both U.S. and Europe, and barely manages to survive in other markets.

Apple's market share has been given a great boost by strong sales of the company's iPhone 6 and iPhone 6 Plus, and has continued its growth towards the end of 2014. The three month data survey ending November 2014 shows iOS eating heartily at Android's sweets, managing to climb at roughly the same performance in the U.S., as shown in the image above. 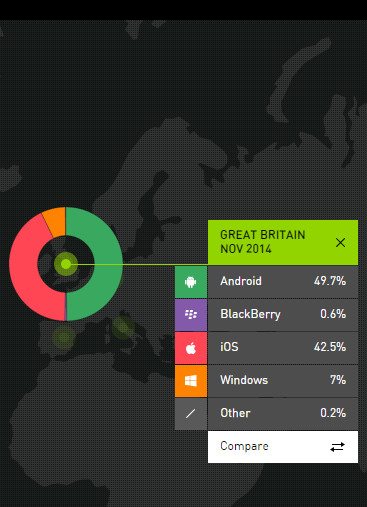 Android also suffered losses in the Chinese and European markets, the most serious being in the U.K., where it saw a drop from over 60% in June 2014 to just under 50% in only five months, and we have yet to see what happened during the holidays, when iDevices were apparently the most popular gift.

Meanwhile, Windows Phone is hitting new lows in some markets, sitting at 7% in the U.K., 3% in the U.S., and 12.7% in Italy as of November 2014. The mobile OS is almost invisible in China, at a meager 0.6%, but Joe Belfiore has promised to change that in the near future, with special features dedicated to Chinese customers.

We have yet to see how Microsoft's Lumia 730 and Lumia 830 performed during the holiday sales, but it's clear that Windows Phone is in dire need of more market penetration. Hopefully the next version of Windows Phone will make the platform more attractive for users and developers alike.

Overall, it looks like Android still holds the crown as the global king of smartphones, especially due to Xiaomi's contribution in the Chinese market, and satisfied customers of Samsung that are not looking to switch to Apple's new iPhones.