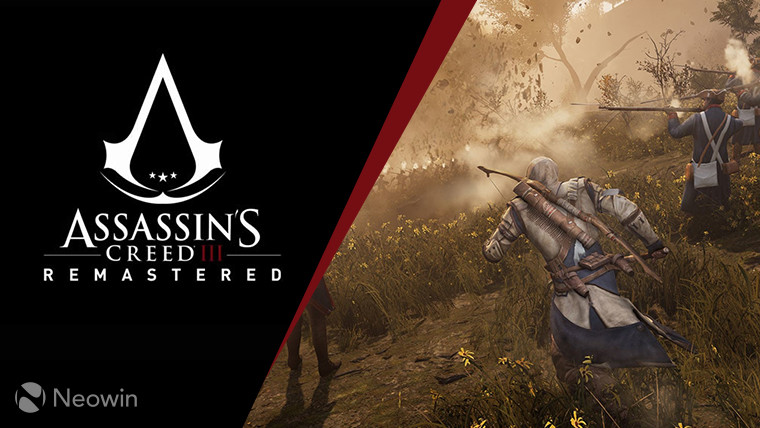 In September of last year, Ubisoft revealed that a remastered variant of Assassin's Creed III would be included for free as part of the season pass for the latest title in the series, Odyssey. Last month, we found out that the reworked title would be launching today for Xbox One, PlayStation 4, and PC, though no specific PC store or pricing was mentioned.

The remaster - which includes the Tyranny of King Washington, Benedict Arnold, and Hidden Secrets DLC, plus the reworked Assassin's Creed III Liberation (released for the PS Vita) - retails for $39.99 and includes 4K HDR support on PC, Xbox One X, and PlayStation 4 Pro. Owners of the regular Xbox One and PlayStation 4 consoles get up to 1080p in terms of resolution upscaling. There are also improvements to crafting, stealth, lighting, character models, and more.

What wasn't known previously is that the game is also coming to the Switch, though that will happen on May 21, with a Japanese standalone release taking place on May 24. The version for Nintendo's hybrid console supports HD Rumble, motion controls, and has specific changes made to support the touchscreen on the device.

Holders of the Assassin's Creed Odyssey season pass have already been able to preload the game since March 26, but for everybody else, the title is available now on the Xbox One, PlayStation 4 (though oddly not in the U.S. store as of yet), and Uplay.

You will also be able to get it via Steam today at 10AM PDT / 1PM EDT / 5PM UTC, so a store link isn't available yet.

It's interesting that the publisher didn't choose the Epic Games Store exclusive route, the same way it did with The Divison 2, given the title's pre-order numbers.