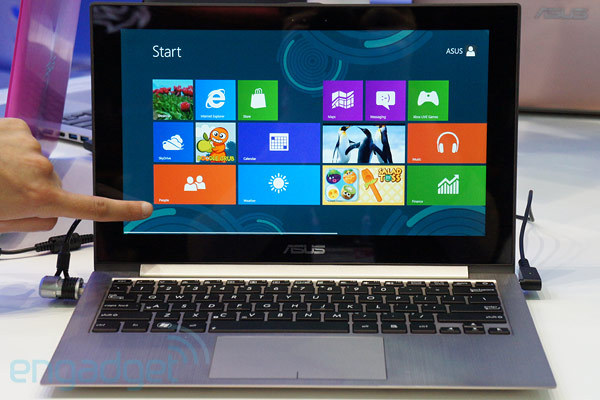 Asus has already shown a number of its upcoming Windows 8 devices this week at Computex, including a WindowsRT-based tablet. Now the company has taken the covers off yet another Windows 8 product, but this one is based on a notebook that's already been revealed.

Engadget reports that Asus showed the 11 inch screen version of its Zenbook Prime UX21A Ultrabook. The notebook is just 2.4 pounds and just 9mm thick. The main difference between the Windows 7 version of this Zenbook Prime and the Windows 8 version that was shown at Computex is that it has a touch screen.

The Windows 7 version of this Zenbook Prime Ultrabook isn't even available yet so as you might imagine there's also no word when or even if this touch screen version made to run on Windows 8 will arrive.

However, Asus has definitely shown this week at Computex that it has a commitment to launching desktops, laptops and tablets that will run and take advantage of all the new features that Windows 8 brings to the table. We should learn a lot more about the company's plans as we get closer to Windows 8's launch sometime in the fourth quarter of 2012.