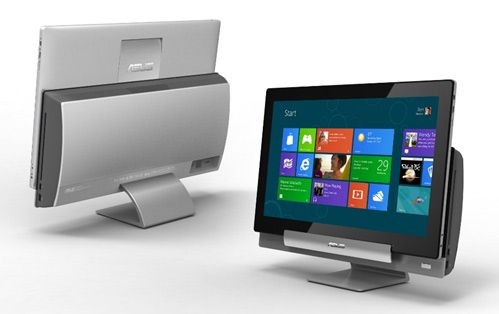 We have already seen a big 27 inch all-in-one PC from Lenovo revealed during CES 2013 that can also be used as a really big tablet (Lenovo prefers to call it a "table PC" but you can put the screen down on the floor as well). Now Asus has announced plans to launch its own AIO Windows 8 product that has a similar feature, but done differently than Lenovo's solution.

Asus's CES 2013 press release reveals the first details on the Transformer AiO, which features an 18.4 inch screen with 1920x1080 resolution support that can detach from its base to be used as a separate tablet product. It has an Intel Core processor inside for running Windows 8 applications while on the go; battery life for the product was not revealed.

That's not the coolest feature of the Asus Transformer AiO. It  has a NVIDIA Tegra 3 processor inside as well. Why? So that it can also run Android 4.1 (Jelly Bean) natively, of course. Asus says just one button push is all it takes to switch between using Jelly Bean and Windows 8.

There's no word yet on when the Transformer AIO will be released, but pricing for the PC will start at $1,299 with an Intel Core i3 processor inside, with higher prices for the versions with Intel Core i5 and i7 chips.