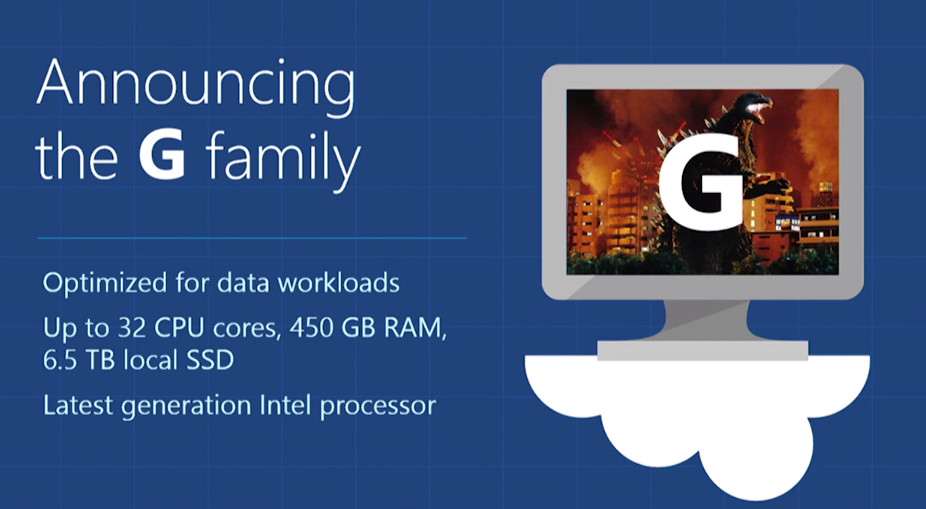 Earlier this week, Microsoft held a conference in San Francisco where Satya Nadella and company talked about the company's future plans for Azure and how they plan to grow the service. With more data centers, new VMs for the enterprise and a bunch of other features, it was a packed event if you like the cloud side of Microsoft.

One of the new items announced are the company's new G-series VMs. The new VMs have more than twice the amount of memory of the largest AWS (Amazon Web Service) VM, and are targeted at enterprise class customers. The product, which will be available later this year, will support up to 32 cores, 450 GB of RAM and 6.5 TB of local SSD storage.

While the D in Microsoft's D series VMs seems logical as it stands for SSD, where does the G in these new VMs come from? The G in G-series stands for Godzilla, well Godzilla was the code name, but that's where it comes from. Microsoft could not use the name Godzilla commercially for obvious trademark reasons, but that's what the new VMs were called internally before being announced this week.

Microsoft's Scott Guthrie explained the name during an Azure keynote session which you can watch here; Scott makes the statement at about the 11 minute 34 second mark in the video.

If you missed the Azure announcements this week, we have a recap of the information that is posted here.