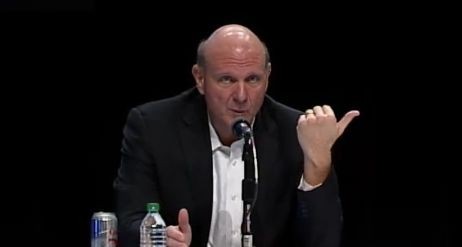 Microsoft is holding its annual stockholder meeting in Redmond, Washington today and as part of the event, the company's CEO Steve Ballmer gave the owners of Microsoft's shares a quick overview of the company's current and near future plans. Naturally, part of his address talked about the launch of Windows 8.

The day before, Microsoft announced that it had sold sold 40 million Windows 8 licenses since its launch just over a month ago, and that Windows 8 upgrades were outpacing those of Windows 7. Ballmer repeated those statements during his address but threw in a couple of extra bits of information. He stated that Windows 8 owners " ... are using the features and downloading new applications. In fact, several apps have reached already 1 million downloads." He did not state which Windows 8 apps had achieved this milestone.

In addition, Ballmer gave an update on the number of new PCs that have been qualified to run Windows 8. He said, "I'm pleased to announce that the number of certified Windows 8 PCs has grown from 1,000 to 1,500. Those new devices will really start to hit the shelves worldwide in the coming weeks and coming months."

We will have more information from the Microsoft shareholder meeting later today, including a story about the always interesting Q&A session.