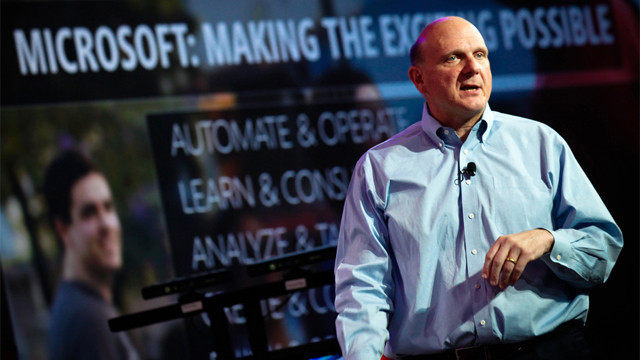 Microsoft CEO Steve Ballmer has given his first interview exclusively about stepping down as the company's chief executive sometime within the next year, giving perhaps the best glimpse at why Ford CEO Alan Mulally is considered a front-runner for the position.

The Wall Street Journal spoke with Ballmer and other Microsoft executives and board members regarding the CEO search, with the Microsoft CEO talking about his conversations with Mulally on how Ford focused on its brand. In the interview, Ballmer discussed how he and Mulally, a longtime friend, met at a Starbucks in Seattle to discuss Microsoft's position in the technology industry.

In the meeting, Ballmer says, he laid out Microsoft-powered smartphones and tablets on a table next to competitors' products, asking Mulally how he was able to turn around Ford, which had been struggling along with other U.S. car manufacturers. Mulally emphasized improved teamwork and simplifying Ford's brand was a key to that turnaround, according to Ballmer. Microsoft is known for having issues with brand perception and its internal teams fighting with one another.

Following their conversation, Ballmer says he decided to "remake my whole playbook" and Microsoft's brand. The eventual outcome of the decision was the "One Microsoft" reorganization plan Ballmer unveiled in July, with new divisions that emphasized more cooperation.

It's well known that Ballmer sought Mulally's advice, though the interview provides more context on the basis of those conversations; it also reveals why Mulally is widely considered a front-runner for Ballmer's position.

The interview states the board was enthusiastic about the reorganization plan, and if Mulally was the inspiration behind it, it's clear to see why they would be similarly enthusiastic about the potential of him becoming Microsoft's next chief executive. Some outlets, however, have speculated that the board's interest in Mulally might exist because of a willingness to spin off or sell Microsoft's Xbox and Bing businesses. The speculation has now transferred to another candidate as well, as it's rumored Nokia executive Stephen Elop may consider selling or spinning off the businesses.

Despite the rumors, many financial outlets have disregarded the integration of Xbox and Bing in Microsoft's other products. Bing, for instance, powers the new search features in Windows 8.1, while Xbox provides the operating system's entertainment offerings, including games, music and videos. If Microsoft spun off Xbox, it would be the only developer of a major mobile operating system that didn't own its own integrated entertainment services.

"Please take good care of Microsoft," Ballmer said in the interview, showing his passion for the company's future even if he's not its CEO.