Windows Phone users now have yet another streaming music service to try out. Beats Music, from the same company that sells the popular Beats headphones, is now available for download from the Windows Phone Store. 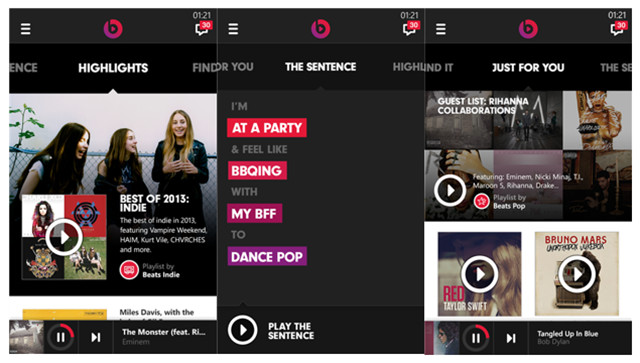 The app was first released for iOS and Android platforms last week and Beats had previously listed the Windows Phone version as coming on January 24. The company, with no warning or explanation, then pushed back its Windows Phone launch on the day of its planned release, simply stating that the app was 'coming soon'.

Now that the app is available for download, users can listen to a library of over 20 million music tracks via streaming or download for offline access. The app also helps users to discover new music: "If you’re indecisive about what music you want to listen to, you can fill in the blanks of a sentence to match tunes to how you’re feeling, what you’re doing and who you’re with."

The app allows users to share individual tracks, albums and personal playlists with friends via Twitter, Facebook or in the Beats Music app itself. The service is free to use for everyone for seven days, but AT&T customers get a pretty generous three month trial. Everyone else will have to purchase a subscription to keep the music coming for $9.99 a month, which is the same monthly fee Microsoft charges for its own Xbox Music service. For now, though, the app is only available for those in the US.