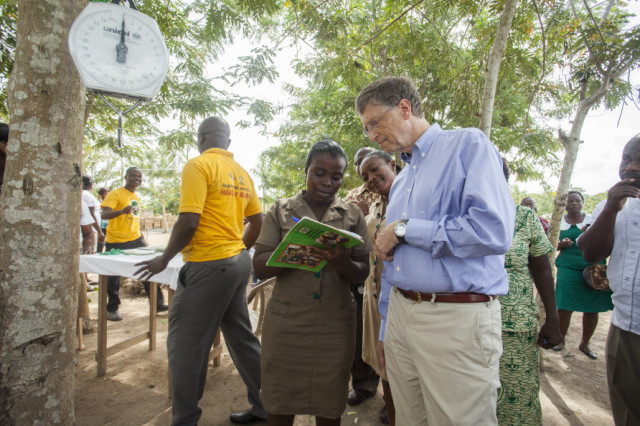 Microsoft co-founder and Chairman Bill Gates may be helping to find the company's next CEO, but his full-time job is with his charitable group, the Bill and Melinda Gates Foundation. Today, he and his wife issued their annual letter from the foundation, and this year they try to dispel three myths about poverty in the world.

The letter says that one of those myths is that poor countries will continue to stay at that level. Bill Gates says that we only have to look at the progress made in places like Mexico City, Shanghai and other urban areas to prove that is not the case. In fact, he makes a rather bold prediction:

By 2035, there will be almost no poor countries left in the world. (I mean by our current definition of poor.) Almost all countries will be what we now call lower-middle income or richer. Countries will learn from their most productive neighbors and benefit from innovations like new vaccines, better seeds, and the digital revolution. Their labor forces, buoyed by expanded education, will attract new investments.

Gates' definition of "poor" is any of the 35 countries that the World Bank currently labels as a low income region, even when inflation is taken into account. While he admits there will be a few countries that will have their income held back by factors such as war, geography and politics, like North Korea, he still believes that most of them will be above the current low income level in the next couple of decades.

Gates also tries to show that foreign aid is not a waste of money and time. He says that those efforts have helped to improve health care in many third world countries around the world. He states, "What we see over time is people living longer, getting healthier, and escaping poverty, partly because of services that aid helped develop and deliver."

Finally, Melinda writes about the myth that saving lives in poor countries will lead to overpopulation. She states that is not the case, with studies showing that when child mortality rates go down, the birth rates also go down. She adds, "Creating societies where people enjoy basic health, relative prosperity, fundamental equality, and access to contraceptives is the only way to secure a sustainable world."