Every year, TED (Technology, Entertainment, Design) Conference brings together the world's most fascinating thinkers and doers, who are challenged to give the talk of their lives. Bill Gates, Microsoft Chairman, who retired last year to devote himself into the Bill & Melinda Foundation, was invited to speak at TED Conference this year devoted to "Great Unveilings."

Gates Foundation has been recently working on ending Malaria and has spent millions fighting the disease. Malaria is a dreadful disease affecting only poor countries and it looks Bill Gates wanted everybody to have a feel of it at the TED conference!

Bill Gates let the mosquitoes loose on his audience at his TED talk saying - "Not only poor people should experience this", according to some tweeters!- 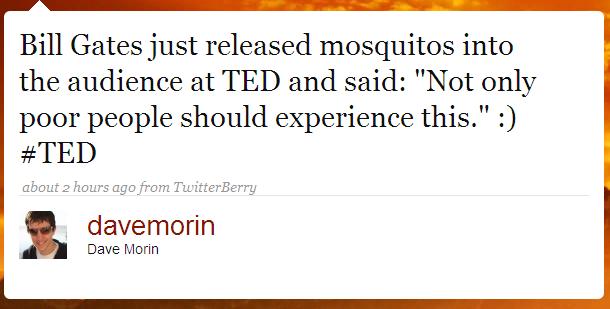 It looks like Gates wanted everybody to understand the importance and the need to eradicate Malaria ;)

Yet again, twitter was used to spread this little news and many twitterrers picked it up so fast! No wonder twitter has exploded in popularity!