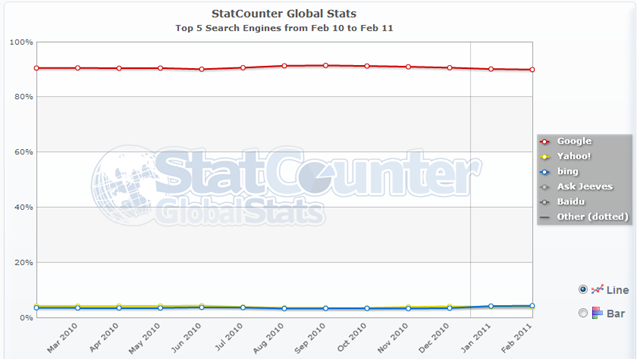 As a new month begins, statistics from February begin rolling in. During the month of February, Bing was the only browser that gained some traction in the search engine realm, while Google, Yahoo, Ask Jeeves and Baidu all dropped a point or two.

Earlier reports claimed that Bing just beat Yahoo worldwide, which actually isn't true. Bing actually beat out Yahoo during the start of the new year, ending with 4.27% total market share, while Yahoo only had 3.96% ending January 31, 2011, according to StatsCounter.com.

Bing was the only search engine that gained, with an increase from 4.27% to 4.37%. Yahoo slightly decreased from 3.96% to 3.93%, while Google had the biggest drop from 90.11% to 89.94%. Although Google finally dropped below that 90% mark, it's still far ahead of anyone else, and even holds more market share than all other search engines combined.

Ask Jeeves and Baidu both dropped a single point to 0.35% and 0.32%. StatCounter shows that the "Other" category for all other search engines continues to fluctuate around that 1% mark. The other search engines jumped from 1.12% in December 2010, to 0.96% in January, and back up to 1.1% in February.