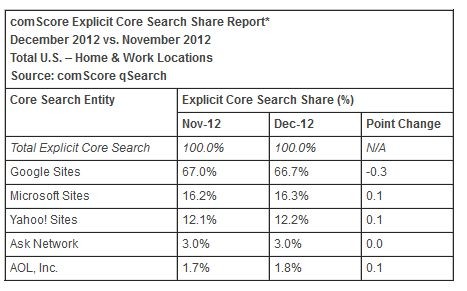 Over the past few months, Microsoft has been taking its online search battle with Google to the next level. Microsoft ran a TV ad campaign that compared search results from Bing against those from Google. Microsoft has also claimed that Google doesn't care about the privacy of their users. Most recently, Microsoft launched the "Scroogled" campaign to show that search results in Google Shopping are influenced by paid ads.

Yahoo came in third with 12.2 percent for December 2012, again up 0.1 percent from the month before. Bing is the basis for Yahoo's search engine, which effectively means that Microsoft gained 0.2 percent of the Internet search market in December.